As World War Two approaches, General Stone visits the convent of a beautiful, quiet nun with terrifying news. He tells Maria the Nazis are close to finalizing a bomb prototype so powerful that it will destroy most of the world and assure them victory. In a strange twist of fate, she is informed that the bomb’s developer, a brilliant scientist named Sergei Bulgakov, has for some unknown reason requested to see her. She is baffled by the unknown man’s unexpected invitation. Bulgakov is thoroughly protected in a compound and all attempts to kill him have failed. The government sees an opening. They implore Maria to accompany a team of spies into Germany with the mission of assassinating Bulgakov. She realizes that the lives of hundreds of millions of people now depend on her. Maria’s deepest fears are unleashed, but so are her passions, as three of the spies on her team are gorgeous men who ignite volcanic desire in her virgin body. 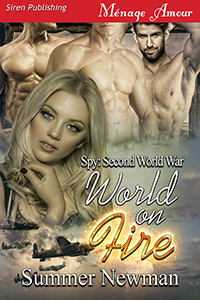 “On behalf of all those people who don’t even know of the journey you’re embarking upon,” General Stone said, “I want to thank every one of you. You are all heroes. I don’t know what will happen and we’ll certainly hope for the best, but I can assure that whoever returns from this mission will be rewarded handsomely. Good luck and stay brave.”

“We’ll get it done,” Thomas assured him.

Before she knew it, she was heading across the English Channel, the wind tossing her hair as she stood alone and lost in thought on the deck. Only then did the reality of her mission hit home.

“It’s really happening,” she muttered, looking over the railing as the waves surged against the hull. “In a few hours I will be in France.” She swallowed hard. “But what’s going to happen to me then?”

A heavy fog rolled in and enveloped the ship. Maria could hear a bell buoy ringing in the distance, but she could hardly see beyond the bow. She felt damp in the cool air, and beads of mist formed on her face, even dripping from her nose and eyelashes. Part of her wanted to go inside, but she felt keenly and exquisitely alive. She was more conscious of her body than ever before and could feel the blood coursing through her veins. Her whole life had been an unwavering routine. Every day she knew exactly what she would be doing the next. When she awoke in the morning, all her meals, her bedtime, everything was precisely planned. The years passed incredibly quickly, but the lack of variety made it hard to distinguish one from the other. She had to admit that hardly anything of note had ever nothing happened in her life. Being a nun was fulfilling in a way and certainly safe, yet it left a gnawing ache in her stomach. The everyday routine, though monotonous, carried with it a certain kind of unthinking momentum. She could have passed her entire life that way with hardly a second thought, but now, on this ship, facing an uncertain and precarious future, her heart pounded and her mind raced.

Suddenly, not twenty feet to her right, a man ran out the door and onto the deck with a frantic expression. He turned his head one way, then the other, glanced at Maria, and started to run toward her when another man emerged from the same door hot on his heels. The pursuer, short and wearing a nondescript grey coat along with a floppy hat, caught up to the first man and violently drove a long knife into the man’s back. Maria could plainly hear the impact of blade into flesh. The victim winced in pain and stiffened before falling with a thump. The killer quickly picked him up and unceremoniously tossed him over the railing. Maria could hear the body smacking the water. The killer was about to hurry back in the direction he came when by sheer chance he noticed Maria, instantly realizing she had seen the whole thing. Maria was in shock from witnessing the murder, but that shock turned to terror when she saw the man steadfastly approaching her, his bloody knife held tightly. She saw his eyes, his cold, remorseless eyes, and she knew beyond all doubt that he intended to kill her and throw her, just like the first victim, over the side of the ship. She would disappear forever into the dense fog and cold depths.

As he moved closer, his eyes grew hotter and more intense. She could see him squeezing the knife handle more tightly with blood dripping from its blade. He stalked forward in a determined, calculating way, much like a cat moving in for the kill on a small mouse. His stare was almost hypnotic. She could see now that his eyes were green, a deep, boiling green. In a flash she recalled reading about Jack the Ripper and now imagined herself as one of that man’s hapless victims. He would destroy her life without a shred of remorse and continue along as if nothing happened, while she would be discarded with absolute impunity. Her life, in that moment, flashed before her eyes. Maria had never harmed anyone, never so much as wished an ill thought on any living soul. She tended to the sick, fed the hungry, worked tirelessly in the convent, prayed for the living and grieved the dead, yet this was her reward. Cold steel, already dripping with another person’s blood, would be thrust into her body. It would be twisted and jerked by that evil, cold hand. All her life she had been highly sensitive to physical pain. A splinter in her toe, a sprained wrist, a bruised back from when she had fallen on the stairs, all those things gave her intense pain, as if her nerves were always on some kind of hyperdrive. Now she had to imagine a strong hand plunging a huge, sharp knife eight inches into her body. The mere thought almost made her faint. Almost. She screamed with all her might.

When the women left, Maria suddenly felt a jolt of embarrassment. Just beside the door the men had opened a crack, the women kept their dirty laundry. Not ten minutes earlier, she had dropped a pair of her panties on top. They were white, very plain, but that morning she had been having sex dreams and when she awoke, they were wet with her juices. The smell of her sex was strong on them. She had awakened with damp panties before, but her panties that morning were saturated around the area of her pussy lips. She couldn’t help wondering if the men had looked down and seen them on top of the pile. That would have been mortifying to her, but she knew that by the angle of the opened door, her panties must have been in clear view. She waited until the women left and tiptoed close to the door, spying her panties on top. The men were talking and laughing but finally exited and closed the door behind them. All was silent. Maria was about to walk to the laundry basket when the door unexpectedly opened. To her shock, a man’s arm reached in and plucked Maria’s panties off the pile. She was so shocked that she could not move. Several minutes later she silently crept forward and crooked her head just enough to peek into the men’s quarters. James was facing partly away from her and wearing only pajama bottoms.

“You’re so beautiful, Maria,” he said, fondling her panties. “I love being around you. You make the sun shine.”

Maria was frozen, but she was not angry. She loved being around James, too, and though he was younger than her, she felt a special bond with him. He was beautiful to look at, really a handsome young man, and she loved his enthusiasm and positive attitude. To see him holding her panties, particularly ones that were so wet with her essence, made her heart flutter, but she was fascinated by it too. It was so out of the ordinary and so raw.

He suddenly lifted her panties to his nose and started sniffing deeply. “Yes,” he said in a passionate way. “Yes, yes, yes.”

Maria was shocked to see him doing such an elemental thing. James sniffed and moaned, rubbing her panties all over his face and licking the section of them that was wet from having pressed against her hot opening. Maria put her hand to her mouth, and her eyes opened wide. James unsnapped his pajama bottoms, and they fell to the floor, exposing his naked, firm body. Maria could not turn away. James was strong, really quite powerful, but his skin was smooth and he had practically no hair on his body. She could not help staring at his firm, tight ass. As he sniffed and licked her panties, he thrust his hips forward as if he was making love to her. The sight of his ass going back and forth mesmerized her. She tried to turn away, but couldn’t. Then he turned sideways and she could see he had a tremendous hard-on. His cock was huge, all of ten inches, and so thick she wondered if she could get her hand around it. It was standing straight up and seemed to be pulsating with power. Maria unconsciously licked her lips as she looked at his bag heavy with cum, the shock of hair around the base, and his huge, bulbous cockhead.

“Yes, darling,” he said in a weak voice, “take my hot cock into your sweet mouth.”

Maria stared and licked her lips from the safety of her hiding place. James unexpectedly slipped her panties down to his cock, wrapped the silky material around his straining dick, and started to pull himself. Maria was shocked again, but she was so turned on that she could not look away. James pulled himself with zeal, dropping his head back, closing his eyes, and working his hand like a piston, the flimsy material flapping as he masturbated. Maria noticed how he had wrapped the wet section of her panties around his prick and was rubbing her juices into his shaft, using them as lubrication. The look of his pumping hand and the flapping material, the big, pink cockhead, the sounds of his moans, everything drove her to an unknown level of distraction. Unable to believe what she was doing, but unable to stop it as well, she lifted her nightie, pulled her panties down to her knees, and started masturbating as she watched him. It felt incredibly delicious, and it seemed as if she was floating away into another dimension on a magic carpet.

“What are you doing!” she chastised herself, dropping her used panties and instantly pulling up the ones she was wearing. She practically ran into her room, sat on the bed, and stared at the floor with the expression of someone who has just awakened from a fit of rage to see the person she has just murdered lying before her. “What are you doing, Maria? Get hold of yourself for the love of God.”