Worth Fighting For (Black Hills Wolves #26)

When Myka Hayes accepted the interior design job for The Den on Tao pack lands, she didn’t expect to be reunited with the wolf that’s haunted her dreams for the last six years. But there he stood behind the bar, looking all too sexy and mysterious.

Kaden Boyd was ready to leave his past behind and begin his future. At least until Myka walked into Gee’s Bar and stirred feelings inside him he’d thought he’d forgotten.

Both burn with desire for each other, but their past complicates things. Not wanting to cause any problems in his new life, Kaden tries to resist his attraction to Myka, but she has other plans. Once and for all, she intends to make him see that some things are Worth Fighting For.

Worth Fighting For (Black Hills Wolves #26)

Myka rounded a corner and spotted Kaden exiting a walk-in fridge. “Hey. I’m glad you’re all for forgetting it because I sure didn’t want to have to tell you I’m not interested. A lot has changed since I was a teenager, including my taste in men.”

It pissed her off. “What’s so funny?”

He shrugged again and cast her a smile. “I try my best.”

“What? To be an irritating ass?”

Both of his brows shot up. “Wow. Now who’s being rude?”

She wanted to throw something at him. How in the hell could she even have been attracted to him for even a second? “You started it.”

“Forget it.” She turned and stomped for the exit. This wasn’t going to work. Gee would have to get rid of the guy or find a different interior designer.

Large powerful fingers dug into her upper arm, and she found herself spun around and then plastered to a wall. His big muscled body pressed against hers.

“I think we got off on the wrong foot,” he said.

She clenched her teeth, staring up at him. Emotions waged a war inside her. She was pissed, but at the same time, her body was extremely aware of his. His scent filled her nose. Musk, pine, and clean sweat. Desire was on the rise. “Your point?”

She waited but he said nothing. “Well?”

“You said you were going to apologize.”

“Do you ever do anything but argue?”

She blew out a breath to try and clear the few strands of her blonde hair falling from their pins into her view. He reached up and brushed them away. Holy shit! Her body trembled, and desire coiled tighter in her lower belly. How in the hell could she be attracted to him still?

“Are you always so rude to people?” she asked.

One side of his mouth tipped up in a smile. “No. And to be honest, I’m kind of mad at myself for provoking you.”

He cleared his throat again and stepped away, running a hand through his hair. “Doesn’t matter. How about we call a truce?”

She tugged at the edge of her blouse. It had ridden up during their struggle. “Fine. No more insults?”

She gave a crisp nod then let her gaze roam over the room. There were lots of things she wanted to ask him. Their truce didn’t exactly invite her to play Twenty Questions, though. She chanced a glance at him and caught him staring at her with a quizzical tilt to his head. Crazy thing was he didn’t even try to flinch or hide his open interest. 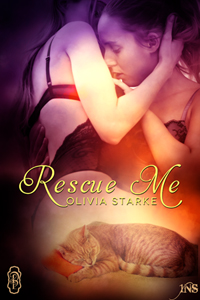 Rescue Me
Olivia Starke
In Shelf
$2.99 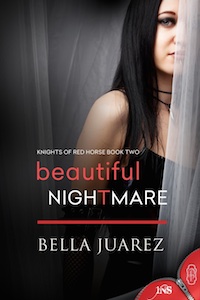 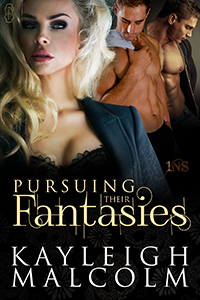