Xavier Marks has the looks, great job, and more than enough money to throw around. The only thing missing is a woman by his side. He hasn’t had much luck in love since he caught his fiancée cheating on him, and isn’t too happy about his current bachelor status. But that may all change when a cute barista from a coffee shop catches his eye. Perhaps she can help him lick his wounds?

Life hasn’t always been too kind to Rebecca Price. With a grandmother suffering from dementia, and the threat of foreclosure on her childhood home, she may have no choice but to turn to a possessive ex-boyfriend who won’t settle for anything less than marriage. She hides a shameful secret that still threatens to destroy her. She’s ready to give up all hope when a suave, yet seemingly kind-hearted man enters her life and comes to her rescue.

Rebecca is wary of placing her trust in Xavier, who wants to be more than a shoulder for her to lean on. But as the two grow close, Rebecca’s guilt over her past discretions continue to haunt her. Xavier wants to show Rebecca that the one place she can feel whole and at peace is in his loving arms. 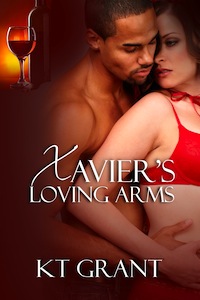 A stone wall surrounded a small waterfall splashing into a pool. Sparkling coins lay at the bottom, and she reached into her coat pocket and found a quarter. “For good luck,” she whispered, flinging the coin into the water.

She bypassed a small number of people waiting near the hostess station and strolled into the bar. A tall, black woman wearing a tight vest and red tie mixed drinks, chatting up the lone customer. She laughed and tossed her head, holding out a small piece of paper. Xavier shook his head at her.

His tan slacks and long sleeved white shirt, rolled up under his elbows, showed off his dark skin tone. The bimbo with her short, spiky hair leaned over, showing off her flat stomach and perky chest. Becca pulled off her coat, jerked her bodice down low to show off her cleavage, and stomped to the bar.

At least I have bigger boobs than she does. She grinned widely when Xavier held up his hand to refuse the paper.

She approached him, placing her arm behind the back of his chair. “Hey there, gorgeous,” she greeted, glowering at the bartender.

“Hey, baby.” Xavier got up from his chair, and didn’t give her a welcoming hug, but something else altogether different that shocked the hell out of her. He swept her into a full blown kiss, his tongue swiping over her lips.

Vertigo set in. The kiss ended all too soon. He broke the contact with one last sweep of his lips and rubbed his nose against hers.

“Hello there,” he whispered, and pulled her in closer.

Her mind blank, she tried to process what had just happened. The bartender shrugged and turned her attention to some new patrons.

“Did you do that for her benefit?” she asked, not certain she wanted to hear the answer.

He grabbed his beer bottle and curved an arm around her waist. “I’ve wanted to kiss you for months. And don’t you dare think I would do that for anyone else’s benefit but my own. 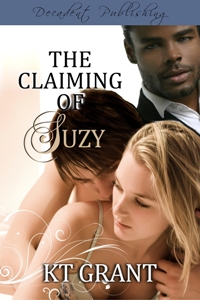 The Claiming of Suzy
KT Grant
In Shelf
$4.99 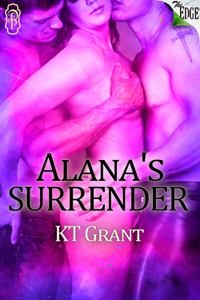