You Will Never Sell This House (MM)

A family curse. A lusty midnight visitor. A terror awakened.

Still grieving the death of his lover, Colm returns to the family estate on Christmas Eve to prepare to sell the house. An unexpected visit from Sebastian Lore, his brutish yet handsome neighbor, leads to fireside drinks.

As things heat up between them, Sebastian shares a long-buried secret that sheds a terrifying light on Colm’s father’s prophetic warning: You will never sell this house. 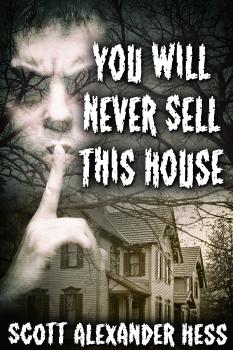 You Will Never Sell This House (MM)

Colm woke, sweating, looking into the fire’s blaze and for a moment, saw his father waving to him to come away from the bonfire, back to the sledding party.

“It’s dangerous,” his father whispered. “You never should have come here. They will know.”

He sat up. He’d never been sledding with his father. Memory became so messy in dreams. The room was dark, the flame’s shadows running across the wall, growing and mutating chaotically. The fire was raging, which made no sense. It had died out before he fell asleep.

There was a rustling sound and he turned, startled. Standing not far from the fire was a very large man with an astounding head of black hair. Colm stood up quickly, then winced at the sharp pain from his sprained ankle. He leaned onto the fire place mantle for support, trying not to look helpless.

“The door was open,” the man said. “I tried to wake you but you were out cold. I coaxed the fire along.”

“Mrs. Finch asked me to check on you. I live nearby. I’m Sebastian Lore,” the man said.

The stranger held out a hand, a very thick broad hand. He wore several gold rings.

“We are neighbors,” he said.

Instead of taking the man’s hand, Colm pressed both of his palms to his forehead. He was burning up. He noticed a brass poker by the fire, a possible defense. He had never been in a physical fight, had never defended himself in any way. This man mentioned Mrs. Finch. Still it all felt strange and unsafe.

“You don’t have a phone here and Mrs. Finch was worried about the storm. She asked me to come,” he said. “But I can go now. I’ve frightened you.”

Instead of leaving, the man sat in the identical floral armchair at the other side of the fire, across from where Colm had been. He settled into the chair, stretching his long legs in front of him, then ran a hand through that mass of coarse hair. The man, Sebastian Lore, sighed and shut his eyes.

He had an extremely wide jaw peppered with black scruff and his lips were sensuously thick, exaggerated. He wore rag-wool pants and a broad-cloth white shirt that opened deeply at the throat revealing his broad chest. His muscular bulk eclipsed the chair, making it look dainty beneath him. Colm noticed how strong the man’s legs were. He’d always fantasized about men like this, strong, hearty, and brutish. In his youth, he’d earmarked the love making scenes in Lady Chatterley’s Lover and Madame Bovary. He’d never told Stan of these youthful fantasies. The fire light brightened Sebastian’s gold rings and as he opened his eyes, he smiled warmly. He was a striking man.

“Our grandfathers knew each other,” Sebastian said. “They would spend every Christmas Eve here together. But that was years ago.”

Colm searched for a memory, an inkling that would ease his mind, a sudden remembering of something his father had said about this house, the Lore family, the past. But there was nothing.

“We looked after the prize horses,” Sebastian said. “Our home isn’t too far off.”

“You walked in the blizzard?” Colm said.

“Of course. We get used to the cold. We live with it all winter here.”

There was a sharp cracking sound, as one of the larger logs split in two and fell back. Standing at the hearth Colm felt a heat rising up his legs. Outside the wind roared. His injured foot throbbed.