Zach Mason, a precocious seventh grader who idolizes his grandfather Gentry, writes short stories for his English teacher but gets into trouble by insisting they’re true.

Enrolled in preliminary college classes, Zach puts his brain to work to convince his teacher and classmates he’s telling the truth. The result is Zach’s dream machine. After contending with pal Wally, nemesis Kenneth, and sister Liz, Zach learns something about life when his scheme goes awry. He’s up to his eyebrows warding off one intrigue after another, including a sneaky science teacher who tries to steal it. 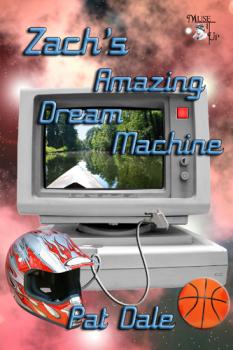 On Friday, I was headed home when I saw Wally. I caught up to him and asked if he still wanted to shoot some hoops.

“You want to play basketball now? Zach, the class nerd? The bookworm wants to bounce a dumb ball around?”

“What’s wrong with that?”

“I thought you didn’t have time for silly games. You sick or something?”

“Nope. You don’t have to pour it on. I just thought it would be fun.”

“Well, okay, Zach, if you really want to. Hey, you’ve been pretty quiet since Monday. You in some kind of trouble?”

“No. Everything’s fine. You want to play or not?”

“Sure. Let’s go to my place and get a ball before you change your mind again.”

We played twenty-one for over an hour. He beat the pants off me. When we finally sat down to rest, he asked the question I knew was coming.

“Hey, did you write any more of those stories? We have another one due in English on Monday.”

“Nope. I figured I’d write something new this weekend. But I’m not going to do any more of Grandpa’s stories.”

“Nope. They just get me into trouble.”

“So, you’re going to give up trying to prove they’re true or what?”

“I’m not giving anything up. I don’t need the hassle. Besides, I’m working on—” I shut up really fast, but I knew I’d gone too far. His eyes lit up.

“So you’ve got something cooking, huh? Does it have anything to do with those big heavy books you got at the library?”

“Come on, Zach. You can share it with me, your best buddy in the whole world.”

“Why not? Two people can have a secret. Tell me.”

“I don’t have everything ready, yet. So there’s really nothing to tell.”

“If I told you, you’d have to swear on your honor you won’t tell anybody. This is important secret stuff and I can’t take a chance it’ll get out before I’m ready.”

“I can do that.” His eyebrows went kind of bushy and his forehead wrinkled. “How do I swear on my honor?”

“Let’s see.” I knew it was a mistake, but he was going to bug me forever if I didn’t let him in on it. “Okay, Wally, who’s the most important person in the world to you?”

“Because you’ll have to swear on your mother’s life that you won’t tell a single person what I’m about to tell you.”

“Yep. So is my secret. That’s what you’ll have to do if you want me to share it with you.”

I could see the worry on his face. Maybe I shouldn’t have made it so tough on him, but I didn’t want him to dare tell any of our classmates what I was about to try. They would make life miserable for me. Things were already bad enough.

He shook his head. “No, it’s okay. I want to know. Nothing’s going to happen to Mom. All right, I swear on my mother’s life that I’ll keep your secret.”

I swallowed hard. Now I had to tell him, but I wondered if I’d just made a big mistake.

It didn’t matter. I’d laid out the conditions and he’d met them. “I’m going to build kind of a time machine with my computer.”

“Your computer? You mean your dad’s computer, don’t you?”

“Nope. I’m getting one of my very own. With a bunch of neat stuff I can use to do my project.”

He gave me a really weird laugh. “That’s pretty good. For a minute I thought you said something about a time machine. I heard you wrong, right?”

“Wrong, you heard me right.”

“You can’t do that, Zach. People have been working with computers for longer than we’ve been alive and they haven’t come up with a time machine.”

“Yeah, right.” Wally cackled. “This is going to be the easiest secret I ever had to keep. Nobody would believe me if I told them, anyway. They’d think I’m as crazy as you. Don’t worry, Zach, your secret is safe.”

I was relieved that he wouldn’t say anything, but the fact he didn’t think I could do it disappointed me. “Well, it is kind of different.”
“Different? This is not just different. It’s impossible. Fruit-loops impossible.”