Millions died when the zombie plague swept the country. For the survivors, the journey has just begun.

Jenna, Sam, and Lola are still alive. Jenna avoids human contact, traveling East Coast backroads with her boyfriend, a dog named Chicken, and a Louisville Slugger. Sam escapes to the mountains, where he’s conscripted into a zombie-slaying militia sent on nightly raids to kill the undead…and innocent civilians. Lola’s imprisoned in the “safety” of a zombie-free New Orleans hotel, but life grows more dangerous when her brother gets bitten by a zombie.

Jenna arrives in the French Quarter, lured by the false promises of New Orleans’ drunken leader. There, she’s ripped away from her boyfriend, drugged, and dumped in a death camp after refusing Franklin’s sexual advances. Jenna and Lola’s lives collide there, where the dead live and the dying are victims of gruesome medical experiments.

Escape isn’t easy: release the genetically-enhanced zombies from the lab to create a diversion, slip away, and don’t get eaten. When Sam arrives, will he join the right side of the battle? 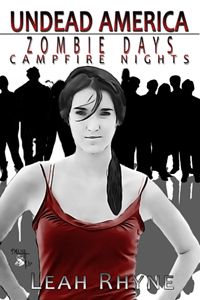 The first sign that something wasn’t quite right was a sign. Literally. The ride had been pretty calm since Isabelle still wasn’t speaking to Ty and was busily filing her nails. Scratch, scratch, scratch. The noise was making me crazy, so I’d opened my window to watch the pine trees and hear the wind on the mountain road. We hadn’t gone far before Isabelle started whining to me again.
“I’m hungry, Sam. Will you pull over somewhere so I can get a snack?”
I rolled my eyes and glanced in the rear-view mirror. Scratch, scratch, scratch. “We’re not stopping,” I said. “There’s a place coming up, but I’m ready to get home.”
“But I’m hungry,” she said again. She pushed my seat with her knee, shaking me. “So hungry. And you know when my blood sugar drops too low I get grouchy.”
“Only then?” I muttered, and then looked to Ty. “You don’t want to stop, right?”
He shrugged. “I don’t care. If it’ll keep her quiet, just stop. We’ll get home at some point.”
“Please? Pretty please? I’m so hungry.”
I sighed. I was thirsty, and that little country convenience store was coming up soon. Ty and I stopped there all the time for beer to take back to the dorms since they didn’t card. I guessed a six-pack for the road wouldn’t hurt. “Fine. But you’re not allowed to ask for anything else for the rest of the ride.”
She sat up straighter for a second and clapped her hands like a little kid, but then went right back to filing her nails after shooting Ty another dirty look. Scratch, scratch, scratch.
I could almost taste the beer by the time I pulled off the highway. My blinker flickered as I started to turn, when Ty sucked in a breath. “Somebody’s been busy,” he said.
“What?”
“Just look.” He pointed to the store.
The sign that normally lit up in neon to say Tucker’s Country Store was dark, even in the bright sunlight. A piece of grey plywood covered half of it, and across the wood, scrawled in the messy chicken scratch of anyone trying to write with spray paint, were the words, “All dead. Turn back.”
I rolled the Jeep to a stop at the far end of the small parking lot, and squinted through the windshield. “All dead?” I said.
“Turn back,” Ty finished.
Scratch, scratch... “What did you say?” Isabelle unbuckled her seat belt and leaned forward between us. Then she covered her mouth with her other hand. “What is that? Boys? Boys? What is that?” With her free hand, the one with the file still in it, she gripped my shoulder, jabbing me in the neck.
I shoved her hand off, and my finger came away bloody. “What the fuck, Isabelle? Ouch!”
Isabelle turned to her boyfriend. “Ty, should we go in? Why would somebody say that? All dead?”

“Dude, Isabelle, calm down! It’s probably just some prank. You’re the hungry one who wanted to stop, right?” He yanked on the handle and pushed the door open.
I was staring at the building, though. “Buddy, I’m not so sure this is a prank. The back door hung open, swinging drunkenly in the breeze. Clapboards were missing from the siding, and I smelled smoke in the air. “Something’s not right,” I said, a little louder, as Ty stepped out of the Jeep. I’d seen something move in the window, behind a blind, and then a tube stuck out through a hole in the glass. Ty was five feet away from the store.
Crack. The gunshot shattered the silence.
Isabelle screamed. Ty dropped to the ground, and I didn’t know if he was shot or not. I dove across the seat and out the opened door and grabbed him by the back of the neck. “Ty? Ty! C’mon, bud, sit up.”
He turned his head and looked up at me. “Get the f**k in the car! Drive!” There was no blood in the dirt, and I started to back up.
The gun fired again and we both jumped back into the Jeep. Pulling the door closed behind him as a third shot went off, Ty hissed, “They’re not shooting at us. They’re point blank, they’re missing on purpose.” We were huddled on the floor and couldn’t see a thing other than the dirt through the floor plug. Isabelle was strangely quiet; she’d even stopped screaming, so I lifted my head to see why. I half expected to see her slumped over, dead, with a bullet hole in her forehead. Instead, she sat silent, rigid, her face frozen with her mouth hanging open and her eyes as huge as softballs.
“Isabelle! What is it?” Ty sat up, too.
Together we turned our heads to look out the front windshield. From around the side of the building lurched a zombie. There was no other way to describe it. As big as a linebacker, it zeroed in on the Jeep, snarling and drooling. Black goo oozed from a gash in his chest, staining the front of a flannel shirt. Part of his hip was missing, and his jeans were still attached by a black leather belt. His arms reached for us, and within moments he was at the Jeep’s hood.
“Holy shit,” I whispered, and in some part of my brain, I wished like hell that my brother was there. He and I’d watched so many horror movies growing up, I kind of wanted him to see this.