4 COCKTAILS: "Now that I’m a full fledged fan of M/M erotica, I actively seek it out and eat it up. Taylor Brooks writes awesome stories about men who love other men, and those stories are really fun to read. “Private Screening” is the story of Jack Mason, a movie star who feels like his life is missing something, and Dean, who’s come to Hollywood to visit his cousin and her fiance (also actors). Jack doesn’t really enjoy parties, and Dean is uncomfortable in the Hollywood scene, so when a big party is thrown for Dean’s cousin’s fiance, they find themselves talking in a corner. Deciding that they would really have a pizza and some beer, rather than the fancy (and small) canapes being served, they head to a place in the house that not many people know about. Of course, the fun starts then :-) The book is rather short, so the story takes off quickly. However, it takes off with a believable timeline given the number of pages. Their connection is instant, and the sex? Nuclear! I like how Ms. Brooks injects fun and humor in her books. Her men have great personalities, and it feels like you actually know them…or would like to get to know them and be their friends. If you’re into M/M love stories, I completely recommend “Private Screening”. It’s sweet, romantic, and very sexy." -- Kenna, Cocktails and Books

After the driver slipped the fifty dollar bill into his pocket, Jack stacked the beer on top of the pizza and made his way back to the west side of the house. He typed the code back into the door and went back inside. He’d been careful, looking around to make sure no one had spotted him. The last thing he wanted was to deal with anyone from the Hollywood scene right now.

He had three missions. Eat pizza, drink beer, and get to know Dean better. Anything else was not of interest to him. He stepped down into the main screening room just as Dean was stepping out from the projector booth.

“I think I got it,” Dean told him and then smiled. “Oh, God that pizza smells heavenly. Gimme some.”

Jack laughed, pleased at how cute Dean had sounded. “All right, hang on, let me see it down.”

He placed the beers on one seat and the pizza on another. Both of them had pizza in their mouth and beers in their hands quicker than either of them could say ahh. The delightful medley of melted cheese with the thick crust and greasy pepperoni and sausage was exactly what his stomach had been craving. The beer was an off-brand, something sold in one of the discount stores, but it still hit the spot. Dean appeared to agree as well, since he had already finished his first piece and was guzzling the last of his beer before Jack had even gotten half way through.

“I’ve spent the past thirty-six hours with Courtney. You know, Miss Health Food Fanatic, and your body is a temple so you should treat it as such, Courtney. Yeah, hungry doesn’t even begin to describe it,” Dean answered before biting into his second piece.

Jack decided not to make a flirtatious comment at the body is a temple phrase, though it took everything he had not to. Internally he was waging a battle within himself. On one hand, he really wanted to make a play for this good-looking and completely normal man. On the other hand though, he couldn’t ignore the fact that this was Courtney’s cousin, and for all intents and purposes her only family. The situation could go south real fast if he didn’t handle things with kid gloves.

“This pizza is phenomenal,” Dean told him.

“Yeah, I know. I order it at least a couple times a month. Although after eating tofu with Court, I’d imagine that just about anything would taste good. So, you got the movie ready?”

“Perfect. You do that and I’ll get the lights.”

Jack turned off the lights and went to sit down in the velvet-lined chairs. For being as old as they appeared, they were still very comfortable. Whoever’s house this was, they certainly had spared no expense with their luxury screening room.

Jack smirked at him. “Yeah, like I said. If we end up dying after this. It’s been nice knowing ya.”

“Likewise.” Dean raised his beer bottle and clanked it against Jack’s before adding, “Que sera sera.”

A minute later the movie was on the screen. The set appeared to be the sleeping quarters on a ship. A circular porthole window sat on the far wall above a steel-framed bed, which was smaller than even the average-sized twin. A thin mattress sat on top of it and across the room was a wooden chair.

A man entered the small sleeping quarter’s room on the screen. He was dressed in uniform. It looked something like old Navy sailors’ outfits, but it was obvious back then attention to detail in the wardrobe department wasn’t of paramount concern to them. He couldn’t help but grin, knowing if Helga had been on this set, the guy would be decked out to the nines in an authentic uniform.

For the first couple minutes of the silent film, the sailor paced about his room. It was clear he was trying to emulate frustration. Then another man entered and slammed the door. There was a dramatic pause between them and suddenly they went toward one another. The way they rushed one another it appeared they were going to fight, but a second later proved his theory wrong.

Jack’s mouth hung open in shock when he watched the two grown men locked in a passionate kiss that left little to the imagination. He was surprised to say the least, not having any knowledge that they made gay movies three quarters of a century ago.

The two actors’ hands roamed one another’s bodies like greedy virgins and then to Jack’s surprise they began undressing one another. He stilled in his seat and tried to sneak a peek at Dean beside him. All he could tell was that Dean was just as frozen as he was.

Jack brought his eyes back up to the screen and watched in almost disbelief as the first sailor sat down on the chair and the second one got down on the floor, kneeling between his lover’s thighs.

Jack opened his eyes and looked down at Dean in the dimly lit room. The old movie had stopped running quite some time earlier, leaving only the light from the projector to illuminate the screen. Sounds of the film reel flapping against the machine drowned out the sound of his heavy breathing and his pulse thumping wildly in his veins.

He wanted to say something, but words escaped him, which was a funny twist of irony, since most of his livelihood depended upon him being able to speak. He’d done hundreds of interviews where he had to think on his feet. Apparently for him, the real struggle came when his pants were around his ankles.

He could barely see Dean’s face in the darkness and he wished he’d paid more attention to what he looked like. He knew he was attractive with blondish hair and unassuming green eyes. His ordinary appearance was what had first attracted Jack to him in the first place. Somehow though, he couldn’t remember the details. Was his jaw square or sharp? Did he have stubble on his face or smooth skin? Hell, he’d just kissed him and he couldn’t remember any of that. What in the hell was wrong with him?

“Come here.” Jack held out his hand and helped Dean up to his feet.

He leaned into him, brushing his nose against Dean’s and giving him an Eskimo kiss. “That was…pretty incredible.” Jack told him.

Jack breathed in the scent of his cock and release on Dean’s breath. It smelled so inviting that he couldn’t help from leaning in a little closer. He licked his lips across Dean’s mouth and pushed his way inside.

Jack pulled away and reached down. He pressed at Dean’s crotch. His cock was hard beneath his dress slacks and teasing him. “Mmm…someone’s a little turned on.”

“Someone’s a lot turned on,” Dean corrected him.

“You sucked me off so good,” Jack told him while rubbing at his dick.

Dean’s chest heaved and ragged breaths came out in huffs of struggled air. The darkness of the room made it impossible for Jack to see him clearly, but he didn’t mistake the passion in Dean’s expression. He could see it shining through his heavy-lidded eyes.

“If you could do anything right now, what would it be?” Jack asked him, licking and nibbling against his ear lobe.

“That turns you on?” Jack sucked Dean’s lobe into his mouth and flicked it with his tongue. “You like that?”

“What else do you like?” Jack asked, hoping to hell Dean would tell him. He had just come but already he could feel his body recovering and ready for a second round.

“I don’t care. Anything. Everything.”

Jack pulled away, amused and intrigued by the open-ended answer. “Any thing, and every thing? That sure leaves a lot open for interpretation. Maybe you could be more specific?”

“Or maybe,” Dean grabbed his hand and pressed it against his cock, “maybe it means exactly what it implies.”

Jack smiled. “Really? Do you have an extra naughty side? Maybe a little kinky?”

“Oh no. That’s no problem, Dean. Although…” Jack pressed his hand firm against Dean’s cock and rubbed it with his palm. “It makes me a little curious. Like, how kinky?”

“Honestly? Right now, I’d go so far as to say I have no limits. Quite frankly, all I can think about is fucking you. How? Where? When? None of that matters. How kinky it is? I don’t really care. I’d fuck you doing fifty down the highway on the back of a motorcycle if that’s what got you off.”

Jack’s cock sprang back to life with the blunt answer Dean gave him. He’d never had highway motorcycle sex before, but he wouldn’t dismiss the idea. Certainly not with this guy.

He unhooked Dean’s belt buckle and started to unfastened the button of his pants. With his eyes looking determined at Dean’s, he began sliding his zipper down. Then suddenly a noise from the top of his stairs stilled him in his tracks.

Both of their eyes shot up to the small hallway, which led to the stairway. The sound of a door opening and voices brought them both back to reality. Jack yanked up his underwear and jeans as Dean wiped at his mouth and fumbled with his belt.

The voices were getting closer as they made their way down the stairs and Jack hobbled to the projection room to finish dressing himself just as he heard Chad enter the screening room. Through the open door, he saw the light turn on and Jack took a moment to steady his frantic breathing and calm himself.

“Dean? What are you doing down here?” Courtney asked.

Jack turned off the projector and walked out from the tiny room to see Chad, Courtney, and two of their party guests standing at the room’s entrance. “I brought him down here. I was telling him about your house. You know, the history you told me. When I mentioned the old screening room, he said he wanted to see it.” 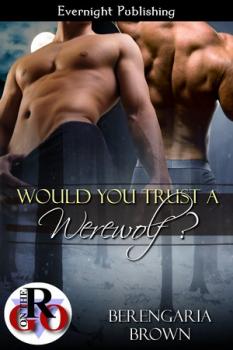 Would You Trust a Werewolf? (MM)
Berengaria Brown
In Shelf
$2.99