1984 is a classic novel whose relevance continues to confront us every day. Some people thought it was a book about the future of the past.

The future is now.

After the election of Donald Trump and his advisor, Kellyanne Conway’s suggestion we get used to using “alternative facts,” the nearly 70 year-old dystopian novel made the # 1 spot on Amazon’s bestseller list.

1984 in the 21st Century offers readers 25 different opinions and viewpoints on this seminal novel from right to left on the political spectrum, with pieces from teachers to journalists and writers, lawyers and politicians, and union activists. The essays range from academic treatises to personal reminiscences to political rants and screeds, and even fiction and theater. 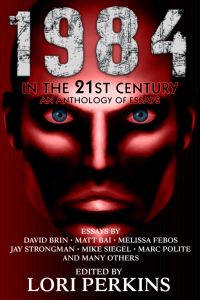 I was 25 and re-reading 1984. The copy was a worn veteran of the used book business, purchased out of some 50 cent bin at one of those grocery stores along the back woods of Maine, where the ceilings seem dingy and dirty in the way a store that sells food shouldn’t. Corners of the soft cover were missing. The upper binding had been chewed by some animal; I imagined a ferret, odiferous in nature, sinking its needle teeth into this classic. Part of the allure of an old, cheap book is analyzing the abuse it has received, imagining all the love that went into the wear that gave its patina. Each page was crisp and browned under my fingertips, paper that would soon crack at the turn of a page. In my possession, the book had traveled from Maine to Connecticut, and we were now adrift on a briny sea.

Crossing the Long Island Sound between Orient Point and New London is far from treacherous. I’d spent a significant portion of my life traveling to and fro on these boats, having lived on Long Island my first 18 years. Sitting on top deck, I sniffed the air, smelling the combination of diesel soot spewed from the smokestacks that rumbled next to me and the salt spray mixing with the wind splashed up and over the railings. I held my fingers tight to keep the pages from fluttering, and my cold hands reddened against the gales.

Engrossed in the words of Orwell, the world faded away, dissolving into that grey dystopian future of England… until a youthful voice shook me out of my imagination. “That book changed my life.”