Gabi Khasani is an environmentalist by day and a bartender by night. She is stunned one morning to find a stack of legal documents committing her to none other than her forgotten grade school crush, Joel Steinberg.

After her initial discomfort at being forced to wed a person she barely knows, Gabi finds that she is still drawn to Joel's good looks and charming personality. The traits he has gained through his career in the United States Air Force have added the finishing touch to a worthy mate and the perfect man. 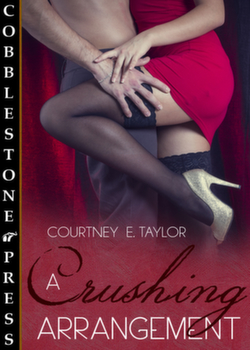 “A toast to my brother and his fiancée!” Dan pounded his fist on the bar. “Four shots of Absolut.”

The bartender turned to a wall of bottles.

“Do you think she recognizes either of you?”

“Not yet,” Dan replied to his friend.

The bartender lined four glasses on the counter, filled them to the rim, and shouted out the price. When she returned with Dan’s change, he nudged the fourth glass in her direction and raised his eyebrows expectantly. She hesitated before flashing a brilliant smile and raising her glass to meet the other three. She knocked back the vodka without flinching.

The third man’s eyes remained locked on her as she moved to the next demanding customer. She was full of radiant energy. Brown hair cascaded down her shoulders, a snug blouse fit above a black skirt, and long, slender legs balanced on strappy heels. A familiar six-pointed star dangled from a silver chain around her neck. Several years had passed since their last encounter, and he was stunned by her present image.

He pressed his lips together uncertainly and glanced at the duo watching him.

The younger man nodded at his brother.

“Are you going to remind her who you are? Explain why you’re here?”

“No. Not tonight.” His attention returned to the bartender. She was spectacular.

Just after midnight, Gabi was relieved from her bar shift by the owner, her neighbor, Sunny, who was also her landlord and best friend. She had found him on the path to starting her life, and they had connected instantly. He was an attractive man with sandy-blond curls and shining blue eyes. Friends immediately, she was glad never to worry about some sort of attraction that could lead to awkwardness—Sunny lived with his boyfriend Peter.

Gabi left her purse under the counter. She walked around the bar to settle on the last stool, laughing as Sunny updated her on the latest drama from the Enquirer. She scanned the crowd for friends.

“The night is young, gorgeous. Get out there and dance!” Sunny motioned her away from the bar. “Let me see you break someone’s heart!”

“You want to hook me up with a Zombie?” Gabi smiled flirtatiously, requesting the strongest drink she knew.

Someone leaned around Gabi. “Make it two.”

The familiar stranger from earlier in the night slid a bill across the bar.

Gabi looked him over and then turned back to Sunny, who raised his eyebrows at her. She leaned forward.

Gabi grinned. “Yeah, maybe good for the night’s tab too.” She turned to the stranger while the drinks were mixed. “Hey, thanks.”

“You like to dance?” He nodded toward the packed dance floor.

“Absolutely. Are you from around here?”

The stranger flashed an amused smile but turned to Sunny without a word as he pushed their drinks forward.

“I guess not,” Gabi muttered to herself. She noticed that the man left an impressive tip. Sunny flashed her thumbs up as she turned to clink glasses and drink. She let the rum linger on her tongue before swallowing.

Still trying to be polite, she asked, “Where are your friends?”

The man motioned to the cluster of pool tables across the room and took another drink. His eyes were intense, almost dancing, as he looked at her.

Gabi sighed. If he was determined not to give her any information, fine. They’d drink and dance in silence. She drained her glass quickly and placed it back on the bar. “Shall we?” The man followed, leaving his half-filled glass behind.

Gabi liked his moves right from the start, the way he seemed to take control of the music. As the alcohol numbed her senses, she allowed herself to sink into the songs. Reality dissolved in the flashing lights.

Gabi didn’t miss a beat as the man inched closer. She sensed a lean and muscular body through his shirt. He slid a hand to the small of her back and pulled her hips against his.

Gabi casually draped her hands around his neck. She only tore her gaze from his to glance at his perfect mouth in anticipation. Their bodies remained locked together as the DJ spun the next tune. When the man leaned forward to capture her mouth, Gabi met him eagerly.

His kiss left her breathless—too tender for a one-night stand.

As the night wore on, Gabi wondered if the stranger would want to follow her home. They had barely exchanged a word since the first dance, but she couldn’t deny that she wanted to rip off his clothes. His lips set her body on fire.

When the stranger indulged in a kiss more passionate than those before, Gabi was confident that he’d ask her to leave with him. She smiled seductively, but he pulled back.

Gabi barely managed not to let her jaw drop with surprise as he pressed one last kiss onto her forehead and turned away.

She had all but forgotten about the two men who had shared drinks with the stranger until he passed them en route to the exit. They watched him solemnly, took one last good look at her, and followed him out.

Gabi shook her head with disappointment and returned to the bar. She poured a drink for herself before offering an extra hand with the customers. Sunny raised his eyebrows, but she waved him away. They could talk later. The dance floor was becoming less crowded, but the counter was busy in anticipation of last call.

Gabi often stayed late dancing and then helped close. Her paycheck rarely reflected the extra hours, but she never left without a fair share of cash, and she was rewarded with a safe walk home in good company.

The doors locked at 2:00, and the staff was dismissed before the next hour was over.

“Now tell me about that hottie.”

Sunny’s enthusiasm made Gabi smile in spite of her disappointment. “There’s nothing to tell. Good for drinks and dance, but I’ve never been around someone so quiet for that long.” She linked her arm in his. “Anyway, I couldn’t be disloyal to sweet Peter.”

Sunny laughed, and they disappeared into the night.