Sexy farmer James McConnell is hosting a haunted trail to raise money for charity even though his farm is in financial trouble. City girl Mandy Newbury is such a hot Grim Reaper that James would volunteer to have her take him now. By night, they’re Halloween characters on a haunted farm hayride, and after the spectators go home, the barn becomes a ménage playground for the adults. Together, they heat up the cold October nights. When Mandy finds a way to save James’ farm, will her offer bring them closer…or chase him away forever? 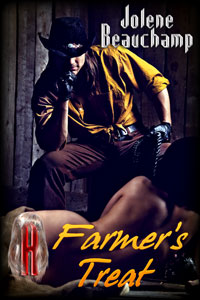 She panted for breath. They hadn’t run far, but the sudden storm had surprised her. She shivered.

“Heck of a storm,” James said. “Probably be over in a few minutes. We’ll be dry in here.”

Water splattered on her head and Mandy giggled.

“Leaky roof,” she said. No sense complaining. Not like there was anywhere else to go, anyway. There was exactly enough space for two people, with no room to maneuver.

“No, you’ll get squashed against that tractor,” she said. She swallowed the rest of her objection because with her back pressed to his front, her bones melted and her breath caught in her throat.

Rain? Who cares about rain? This hot body pressed against hers was the only thing she could think about right now.

She moaned and then she lifted her fist to her mouth to stifle it. Had he heard?

His erection pressed against her and she swallowed hard. Yep, he’d heard her. And reacted.

Trapped in a shed with a storm raging around them. Part of her wanted to open the doors and run out in the rain. The other part wanted to wiggle her ass against his arousal.