Sydney Tyler is renting a barn conversion in Northern France, planning to spend the fortnight getting some words down on her novel. Unfortunately, construction work in the other half of the building puts an end to her peace and quiet. Genuinely upset that the builders are going to disturb her, the property’s handsome English owner, Harry Bay, offers to make it up to her. He’s a little flirtatious, and after spotting his wedding ring, Sydney keeps him at arm’s length. Sexy as he is, she has no intention of getting involved with a married man. But when Sydney learns the truth about Harry, will their mutual attraction spur them on to work through their emotional baggage and make this more than just a French affair? 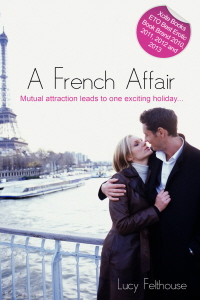 “A French Affairis a sweet romance between two people wanting a new start after being hurt, but with lots of lovemaking, not just sex. A good book for a rainy afternoon or for lying on the beach, (not to mention, if you might be on your way to Paris in the springtime!)”. 4.5 stars

Forcing her limbs to move, she rolled out of bed and over to the window. Opening it a little, she replied, ‘Just a minute. You woke me up.’ She closed it again before giving him chance to reply, then went into the bathroom, splashed cold water on her face, scraped hasty fingers through the birds’ nest that was her hair and decided that would have to do. Perhaps her terrifying state would scare him off and mean she could avoid having a difficult conversation at such an early hour.

Grabbing her robe from the hook on the bedroom door, she slipped into it, tied the belt tightly around her waist, and left the room. As she got halfway down the stairs, she could see Harry though the pane of glass at the top of the door. He looked as though he’d had a sleepless night too. She didn’t know whether to be relieved or disturbed by this information.

Sucking in a breath in an attempt to steady her nerves and push some oxygen to her brain, hopefully kick-starting it, she opened the door.

‘Morning,’ she said, standing back to let him in.

‘Morning,’ he replied, regarding her with a sheepish expression. ‘Sorry. I slept really badly, then woke up at half six and couldn’t get back to sleep, so I thought I’d come over and deprive you of sleep too.’ His grin told her he was only half-joking. ‘Anyway, these are for you.’

She took the proffered flowers and box of chocolates with a frown. ‘What are these for?’

‘Well,’ he said, heading into the kitchen, filling the kettle and switching it on, ‘I did what we agreed. I slept on it. As I said, I slept really badly, but you get the gist. And this morning I still think we should go for it – more than ever, actually. Yes, we’ve both got baggage, and at home there’s a bit of distance between us, but that’s even more reason to give it a go. If things don’t work out, at least we won’t bump into each other in the street! And as for bringing flowers and chocolate, well, I didn’t know which you’d prefer, so I decided to hedge my bets. I’m determined to impress.’

The mischief in his eyes and the smile threatening to take over his lips were infectious. Sydney couldn’t help it – she laughed. And once she started, she couldn’t stop. When she eventually calmed down enough to take a breath, she put the gifts he’d brought her on the worktop and stepped over to where he stood by the boiling kettle. She slipped her arms around his waist, and he quickly reciprocated.

Harry leant down for a kiss, then paused, seemingly thinking better of it. ‘Does that mean you’re going to give us a chance?’

Standing on her tiptoes, Sydney pressed a kiss to his lips. ‘What do you think?’

‘I’m going to take that as a yes.’ With that, he captured her mouth with his, and they quickly became lost in one another, this time with no reason to stop.

Sydney felt much better about their kiss this time. Firstly, she too had spent time during the night thinking about their potential relationship. She’d eventually come to the conclusion that it was pointless trying to guess what would happen. The only way to find out if things would work out between them was to try. She couldn’t punish him – and herself – for her ex’s deceit. If she never trusted another man again, then she’d never be happy. And she deserved happiness – everyone did.

She pulled away, feeling pleasantly dizzy and sucking in a much-needed deep breath. Harry took her hands and pressed kisses to her knuckles, and it was then she realised he’d removed his wedding ring, leaving a band of pale skin in its wake.

‘You’ve taken it off,’ she said, though it was stating the obvious.

‘Yes, I have. It felt like the right thing to do. I’ll always love and miss Shelly, but she’s gone and there’s bugger all I can do about it. And I figured that as I’m asking you to give me a go, to let go of your past and trust me, the least I can do is let go of my past too. I have no doubt in my mind that it won’t be plain sailing, but I genuinely think it will be worth it.’

He was so wide-eyed, so earnest, and his words so meaningful that she didn’t know how to respond. So she let her body do the talking instead. Walking backwards and pulling him along with her, she perched on the edge of the kitchen table and wrapped her arms and legs around him, guiding his head down for another kiss. She gave it her everything, doing her best to tell him with actions what she couldn’t seem to put into words. That she thought it would be worth it too. That she’d let go of her past and make a fresh start with him, and do her very best to make him happy.

The passion that had threatened to overwhelm them the previous day did just that, and the kitchen filled with moans, groans, and grunts, punctuated by the occasional expletive. They held onto one another for dear life, and Sydney could not stop herself from grinding against the erection that was pressed between her thighs, which quickly grew harder as she writhed.

Twisting his face away and gasping into her ear, Harry said, ‘Fucking hell, Sydney. Carry on doing that and I won’t be able to stop myself from pulling off those cute pyjamas and doing very rude things to you.’

Her response was another jerk of her hips.

She moved her arms from around his neck and shifted them until she could cup his buttocks in her hands. ‘Neither was I.’ She pulled him harder onto her, so hard she was in danger of getting bruised. ‘Harry Bay, I would very much like you to do rude things to me.’

‘I’m sure,’ she said quietly, then turned his face back to hers and kissed him.

Their lips and tongues battled, parting only when between them they yanked off Sydney’s robe and pyjama top and Harry’s polo shirt. The rest of the time, they busily unzipped and unbuttoned until they were both naked, their heated skin moulded together.

Sydney reached to grab his cock.

‘Sydney,’ he gasped, taking hold of her wrist. ‘Wait … let me look at you.’ He stepped back, his naked form totally glorious and yet utterly out of place in a kitchen. ‘Wow, you’re beautiful.’

As his gaze raked her body, she did the same to him, studying him from the top of his greying head to the tips of his toes. She very much liked what was in between. His shoulders were broad, well-defined, his torso not overly muscular, but toned. He had legs somewhere between a football player and a rugby player – thick and strong, but not too big for his frame. And as for his cock … Well, it had been long enough that anything would have done, but she certainly wouldn’t be “making do” with Harry’s cock.

It was just right, as a certain fairy tale character would have said. Not small, not by a long shot, but not so large that it would be uncomfortable. More importantly, given his superb kissing technique, she suspected he knew what to do with it.

Finally, she shifted her gaze back up to his face and was then caught like a rabbit in headlights. His eyes were hooded, the look he shot at her intense and laden with intent. He appeared predatory, hungry, and she had no wish to deny him any longer.

‘Come here,’ she said, with a grin and a crook of her finger. ‘I’m done looking. Now I want to touch.’

He smirked back and closed the space between them in a couple of large strides. His stiff cock pressed against her as he took her into his arms, leaning down to draw her bottom lip into his mouth.