Christmas is not the joyful time it is supposed to be for Carrie Summers. Her marital problems have escalated to the point where three days before Christmas she storms out of the house and goes for a drive to think.

The drive calms her down and she makes up her mind to tell Ryan she’s sorry. On the way home, a broadsiding pickup truck steals her chance to make up with him and tell him her big secret.

When Carrie wakes she finds herself on the other side facing an angel named Jon who tells her of her erring ways. It is too late to make amends, there is no way now…or is there? 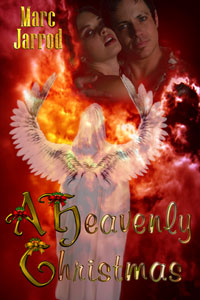 Ryan pulled her into his arms “It’s going to be okay. Elation flowed through him. Her sudden change of behavior worried him, but not enough to complain or question outright.

Rather than continuing the conversation, Carrie kissed him, driving her tongue into his mouth. Gently she leaned into Ryan pushing him down, never breaking the intensity of their kiss.

Carrie’s sexual attack shocked him, but he yielded easily to her sexual aggression. Carrie pounced on him, pinning him down and devouring him. She began the dance of love with her tongue playfully engaged with Ryan’s.

He in turn, was stunned by her impetuous passion. In the past, he’d asked, cajoled, begged and even bribed her to make love. In fact, they hadn’t made love in several months. What in the hell is going on with her?

While Carrie continued to kiss him, Ryan slipped his hands under her t-shirt, moving them to push up her bra then slowly caressed and massaged her breasts, squeezing them and then tweaking and pulling her now-hardened nipples.

Carrie resumed her position, her eyes locked on his, her breasts looming before Ryan.

Ryan realized exactly what Carrie wanted. He raised his upper body to capture a pebbled nipple in his mouth, taking full advantage of her change of heart.

Carrie tilted her head back, closing her eyes and giving in to Ryan’s assault on her sensitized nipples. Suddenly, she pulled back and abruptly moved away from him.

Here we go again. How could she do this to me? Why is she being such a dick tease?

To his relief, that was not her intent. Carrie moved down to remove Ryan’s shorts and underwear in one fell swoop, tossing both playfully over her shoulder. She bent forward and took his pulsating cock with both hands and without any foreplay, engulfed half of the shaft in her mouth.

Ryan’s lower torso immediately jerked upward and pushed deeper into Carrie’s mouth. The sensation, the suction of her talented mouth was beyond compare. Perhaps it was because he hadn’t had sex for months, but he swore it grew several inches in length and girth. Moist heat surrounding him, he thrust his pelvis upward even more, surging his throbbing cock against the back of Carrie’s throat.

Carrie relished his willingness to let her take control. She pulled off him and felt every vein of Ryan’s heated shaft as she sensually moved her tongue along each ridge, making sure she covered every inch.