A Hell of a War

In A Hell of a War, habu brings together nine previously published, but expanded, and one new gay male stories set in, leading up to, or closing out on World War Two. Six of the mostly bitter-sweet stories are set in the European Theater of the war and four are set in the Pacific Theater. None glorify war; all deal with sexual relationships between men that are fostered by the tensions and uncertainties of war and the conditions of being thrown together with other men with no one but men to share sexual tensions with on a daily basis. The stories in this anthology emphasize the intensity of sexual need and the expansion of opportunities for satisfying this need in young, fit men exposed to life-threatening danger and the need seek out what they need when they still can have it. This is not a military warfare book; it is a book of stories about gay male relationships in crisis and formed by necessity and opportunity. 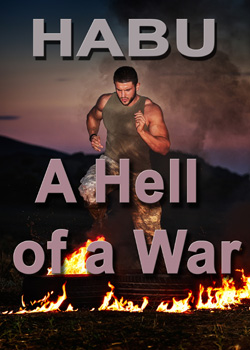 A Hell of a War

“Looking good, gunner’s mate,” the lieutenant commander said as Ned walked up to him.

“Well, you know the Navy, Sir,” Ned answered. “Lots of backbreaking work and the grub is about inedible, so the balance is good for keeping the body fit.”

“And yours certainly is fit.” Barely here and the man already was at it, Ned thought—moving into his dominating position. Ned was both aroused and felt beleaguered by that.

“Same with you, Lieutenant—umm, Lieutenant Commander. Don’t know how you keep shipshape while riding a desk as you told me you do now.”

“San Diego is a wide-open town,” Lew answered. “A desk is not all a man can ride here.” He gave Ned a wink. “And let’s make it Lew and Ned between us when the brass aren’t looking, shall we?”

“Fine with me . . . Lew.” Ned was a bit off center from what Harris had said before that. He hadn’t known how it would be between them. And, yes, he’d noticed that the man hadn’t told him to dispense with the “sir”—that the lieutenant commander didn’t seem to mind the dominator distinction.

They’d parted so abruptly on Peleliu. And Ned knew so little about the naval officer and needed to know more before thinking of relocating to San Diego. A lot was riding on what he found out. Among other things, he wanted to know what, if anything, Harris had in connection to the offer of a cushy billet out here if Ned stayed in the Navy. The Navy seemed anxious to push men out of the force, the war being over and cannon fodder not being needed now, but Ned’s jobs officer had gone the extra mile to talk up the San Diego offer.

“Come on through the station,” Lew said. “I have a car waiting. I’m putting you up at the Del Coronado, the fanciest waterfront hotel we have here. The Navy hasn’t given up all of the rooms it commandeered during the war yet, and I snagged you one.” He obviously wanted Ned to understand that it was something he had arranged.

“I won’t be staying in the naval barracks? I’m still enlisted, you know.” What Ned really wondered was why Lew wasn’t going to put him up himself. If he’d done that, it would answer Ned’s most pressing question—well, more than one question Ned had. But by rights Ned knew he should be staying in the base barracks, not in some swank seaside resort hotel.

“The hotel business is strange here. Sometimes you can’t get a room without selling your body. Sometimes, the Navy can’t fill its billets and the rooms go to waste. We’re just lucky I could get you in. Bet you’re thirsty after all those days on a train too and would love to get a shower. Thirsty first, I think. The hotel’s got a great open-air bar, right on the water.” He didn’t wait for Ned to say what he’d like to do after coming off a long train ride.

The waterfront bar was, indeed, quite nifty, but they didn’t stay there long. Ned had checked in at the desk, but Lew suggested he treat them to a drink before Ned went up to the room, so Ned lugged his duffle bag through miles of reception rooms to the outdoor, seaside bar. Lew ordered him a beer and Lew had scotch. They talked for almost an hour and polished off another two drinks each, filling in the blanks of how the life of each had gone since that fateful day on Peleliu Island half a world—and, it seemed, half a lifetime—away, even though it had only been a year and a half. There was a lot to talk about—and a lot of talk to avoid—but Ned could tell that Lew was getting antsy. He wanted something. Ned wanted something too. Chances were good that they wanted the separate parts of the same thing.

As the conversation drew down, Lew had the idea of seeing if Ned’s room was nice enough—although Ned could have told him that a triple bunk under cannon shells against a steel bulkhead had been about as nice as Ned had had for years. And then Lew had Ned. This didn’t come as a surprise to Ned. Lew had had Ned before.