A Man For Every Occasion

The bustling city of Port Davinica is home to many stories of love, lust and more than a few happy endings. Follow the adventures of these men as they find love in all manner of places with an amorous touch of the supernatural thrown in for good measure. You'll soon discover in this collection of romantic tales that no matter the festive occasion – Halloween, Christmas, and especially Valentine's Day - there’s always time for love.

Lust After Death, On The Naughty List, and Ain’t No Saint, were originally published as individual eBooks by Lydian Press. 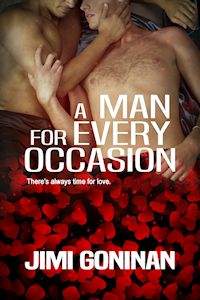 A Man For Every Occasion

Lucien Noir was something of an unabashed bastard. Indeed, he often gave others the impression that he was only capable of seeing the misery of the world…and rather reveled in it. It was almost as if he was living under a perpetual dark cloud, with nary a ray of sunshine in sight.

This was particularly true at Christmas, where the crass commercialism only served to rile him up further. It was barely mid-October and the gaudy decorations had already begun to go up about the city putting him into an even blacker mood than usual.

It’s not even Halloween yet, for fuck’s sake!

The one consolation about the festive season was that he didn’t have to work at Christmas and could happily spend the day locked securely away in his apartment safe from all the incessant false cheer and forced family togetherness.

It wasn’t that Lucien was an inherently bad person, mind you. It was more that he didn’t really care a great deal about anyone apart from himself, often coming across as lacking in empathy and about as emotionally available as a refrigerator. He wasn’t exactly heartless, per se, rather he made damn sure his heart was kept well out of sight and protected from the world.

From an early age, life had taught Lucien repeatedly – and with quiet some force – that the only person who he could truly depend on was himself. His parents hadn’t been fit to raise a pet rock, let alone a child, and the succession of lackluster foster families that had followed had only cemented his abysmal view of humanity.

Despite this, there was one person who had managed to penetrate his armor and cause Lucien to feel a small semblance of affection – well, as much as his heart could muster at any rate – his former foster brother, Oliver. Lucien had come to Oliver’s parents, the Walkers, when he was seventeen years of age. They were lovely people but by that point he was too far too damaged, by his years in and out of juvenile detention, to appreciate their kindness. Lucien did, however, get along with their son, Oliver, who was only two years younger in age. Oliver had been far more welcoming than any of the other foster siblings Lucien had encountered during his time in the system.

Not rebuffed by Lucien’s tough guy persona, Oliver had happily shared his life with him – freely lending him clothes, his beloved computer games, or whatever else Lucien had taken an interest in.

Naturally, Lucien had been mistrustful at first, unwilling to believe that someone could genuinely care for him and ask for nothing but friendship in return. He’d thought that Oliver simply saw him as another of the many stray animals he was constantly bringing home to look after – it was lucky Oliver’s mother was a vet. As the months passed, however, Lucien had slowly let his guard down and begun to let Oliver in.

Sadly, this friendship wasn’t enough of a stabilizing influence and his self-destructive tendencies eventually resurfaced. After he’d been with the Walkers for just over six months – the longest placement he’d ever had – Lucien reconnected with some of his less savory friends and was soon back to his delinquent ways – petty theft and vandalism being his rebellious acts of choice. It wasn’t long before the police turned up on the Walkers doorstep, threatening Lucien with the possibility of doing real jail time. Lucien felt he had no option but to leave. He ran away to New York shortly afterwards, just before Christmas in fact, without a backward glance. Not to say he didn’t have a twinge of regret at leaving Oliver, and his earnest friendship, behind.

Lucien’s plan of fading into the anonymity of the big city went swimmingly for about five years. It was then that his past unexpectedly caught up with him in a gay bar in Hell’s Kitchen.