A Priestess of Mars

Lilith of Gomorra is a noble Martian priestess who sees love as nothing more than an exercise in naked carnality. But when she discovers a higher form of love, her faith in the ancient religion turns to doubt and she must choose between her people and the man she loves. The fate of the Earth hangs on her choice.

In 1907 in an alternate steampunk universe where Tesla invented a electric antigravity device that makes steam-powered spacecraft possible, asteroid miners have discovered ruins that pre-date human civilization. Two expeditions head to Ceres to explore them–an American expedition funded by a wealthy senator, and a German one organized by the occult Thule Society and led by Aleistar Crowley. But the Martian priesthood and their supernatural allies have infiltrated both and plan to discover the secret of the weapon that shattered the ancient world of Pentara in order to turn it against the Earth.

Can Crowley and his proto-Nazis find the Kaiser a world-dominating weapon? Will the Martians achieve their apocalyptic revenge against their colonial masters? Whose side is Lilith on? Her father’s? Crowley’s? Or does she have ambitions of her own? 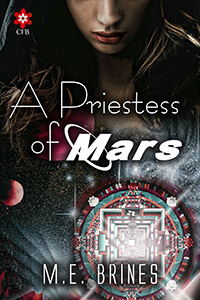 A Priestess of Mars

The greatest minds of Mars had failed to destroy Earth’s civilization once. They must not – could not – fail the Masters again.

The light from the brazier flickered off the cold stone of the musty vault, the scent of old blood tainting the air. A large egg-shaped table stood in the center of the room, a bizarre mass of clockwork purring beneath the gleaming surface. Around it stood four men in dark robes… and one woman.

She was young, half the age of the others, and her skin was the color of ebony. Her lustrous hair cascaded down her back and over the unworn hood of her cloak. Before her on the table lay an inkpot, quill pen, and a sheet of parchment made of human skin.

A portly figure in a blood-red satin robe gestured at her with a pudgy finger.

Her eyes narrowed, but she remained silent – and motionless.

The baldheaded man to her left had a pate that shone as if it had been polished. His robe was darkest silk. Embroidered on its back in gold thread was the symbol of the High Priest – an eye with flames for lashes inside a pyramid. He spoke with a voice that belonged in a crypt.

“She isn’t a servant, you gluttonous fool.”

Across the cavernous room a door swung open, revealing torchlight and a pair of guards in red tunics with polished brass helmets. Short iron swords hung from their belts, although one had a Colt revolver tucked beside his scabbard. The High Priest scowled at the sight, but said nothing.

The guard cleared his throat nervously. “Uh, the Elder of the Sacrificial Brotherhood, Milord.”

Another dark-robed figure entered, giving the guard a wide berth, and bringing the faint scent of decay with him. An ornate wavy-bladed dagger hung from his sash. Both it and his fingernails were crusted with some dark, unsavory substance. He glared at the guard’s Colt as if its mere touch might contaminate him with some loathsome disease. Gesturing at it with skeletally thin fingers, he sneered at the portly figure in red.
“Do all your temple guardians bear such Earther….” Sighting the woman, he paused, his lip curling as he struggled for the proper word. “Devices?” He smirked contemptuously as he took his place by the table. Behind, the door closed again, the guards remaining outside.

The portly one shrugged, an almost imperceptible gesture amid his rolls of fat. “They may be unclean, but they’re effective. Cold steel is fine for unresisting sacrifices, but the encroachments of the Unbelievers can only be prevented with superior force. And that means hot lead.”

The High Priest nodded. “Regrettable, but true. Now that we are all here.” He threw a steely glance at the tardy Elder. “We can now, as the Earthmen say, get down to business.”

“And that business is?” The speaker, the Keeper of Secrets, wore a black robe that hung over his sparse frame as if decorating a scarecrow. The wisps of white hair that rimmed his bald pate gave him an eerie look, like something a grave robber left behind.

“The destruction of Earth.”