A Pumpkin for God

A Pumpkin for God was inspired by my granddaughter Keri, who was trying to accept her grandfather's death and did it in such a beautiful way that I felt it was a story that should be told.

About the Author:
The author, C. Gale Perkins, is a 75-year-old grandmother. She has three children and several grandchildren. She will be the first to tell you that her grandchildren are the gifts from her children to her. She is the widow of the Evan F. Perkins to whom she was married to for 42 years. She now has a companion in her life that she has enjoyed the past ten years, who has been an inspiration in her journey of writing and publishing her three books: The Baby's Cross, La Cruz Del Bebé (Spanish translation of The Baby's Cross), Transcending Times: Poems by an Angel, and A Pumpkin for God.

About the Illustrator:
The illustrator, Steve Lavigne, has been drawing his entire life, professionally for the last 24 years, with Mirage Studios, home of the Teenage Mutant Ninja Turtles, working on comics as a Letterer, Colorist, and Licensing Artist. Currently, he works as a freelance artist from his home in Maine, with his lovely and very supportive wife Denise, their three amazing kids, Gracie, Jackson and Cooper, two dogs and a turtle. 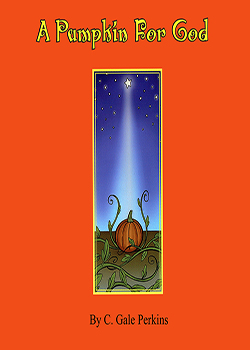 A Pumpkin for God