A Question Of Honor

The honorable Clan MacDuff has protected the coveted relic for centuries. When rival Clan MacAlpin discovers the eldest brother of the MacDuff is to take a wife, their scheming materializes in the form of deceit as they kidnap Alick MacDuff's betrothed and send their sister in her place.

Tegan MacAlpin has no choice but to pretend to want to be bride to her blood enemy. But once inside Castle MacDuff she fears her ability to procure the relic before Darius, Alick’s dangerously handsome and highly suspicious younger brother, discovers her treachery. When all is said and done, will she remain loyal to her clan in hopes of claiming her long-sought freedom, or bend to the bidding of a forbidden nemesis? In the end, it all comes down to a question of honor... 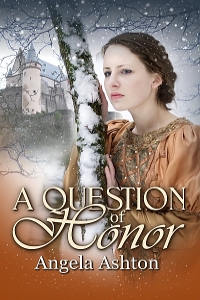 A Question Of Honor

Robert closed his eyes. Tegan thought he’d fallen asleep when they popped open again. Damn, he could die any second and she’d be no closer to finding the relic than she was when she’d crossed the enemy’s threshold. She couldn’t waste another minute, given the unpredictable happenings from the time she’d entered the monstrous dwelling. “My uncle tells me the MacDuff possess an exceptional heirloom.” It was out before she could sugarcoat it, but she didn’t care.

“The Cross of St. Luke. I shall bless the union with it. No doubt, it shall be my last.” Something flashed behind dull eyes and he looked as though he was going to say something, but fell asleep. Or died.

“Holy stars,” Tegan breathed. “M’laird?” No response. “Laird MacDuff?” Still, he didn’t answer. She shot from the chair and leaned over him, checking for signs of life. Under such unfavorable lighting, she simply couldn’t be sure.

Should she summons aide, or let him pass peacefully into the devil’s lair? It would be the humane thing to do. “M’laird?” She placed a hand on his cheek. Surprisingly warm, for someone with such little flesh to pad rickety bones. Her hand moved to his throat. There, a trivial heartbeat; alive for the moment.

As Tegan pulled her hand away, the candlelight caught the glimmer of something around his neck, flickering like a courtly bauble beneath the blinding sunlight. She peeled back his shirt, and gasped. A small key hung from a thin black cord tied about his neck.

It couldn’t be a coincidence. If it weren’t protecting something valuable, the old man wouldn’t keep it so near to his heart. This had to be the coveted key.

Tegan ever so carefully slipped the leather strap from his neck. The key hadn’t quite reached her pocket before the door flew open. She stifled a scream when in whisked a turbulent gust in the form of one enraged Darius MacDuff.

The scowl marring his face was as deadly as his skill on the battlefield was rumored to be. The thick tassel of raven-colored hair was tied back, the broad chest heaved with each exasperated breath and giving him a dangerously savage appeal. He looked riled enough to challenge a herd of wild bulls and come out the victor. “What the hell are you doing in my father’s chambers?”

Looking for Paradise
Tianna Xander
In Shelf
$4.99
Tweets by
sirenbookstrand