A Question Of Time

Years later, successful author Celia Cavalotti is still mourning the death of her favorite teacher, who died in a car crash in 1989. But when a car accident of her own hurtles her back in time to the week of his death, she has a chance to change the future.

Finding herself in the 1980s is a shock to the extremely modern Celia-- but even more shocking is seeing her dead English teacher, Alan Forrest, alive and well before her very eyes. Alan is far more handsome than she remembers, and she can't resist the urge to flirt. After all, they have so much in common, like writing and a shared love of science fiction. Celia knows she's falling in love with him-- but can she use this opportunity to prevent his tragic death? What is happening to her? And why can't she seem to stay in one place and time? 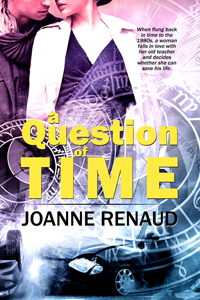 A Question Of Time

“That’s a great book,” a voice said behind her.

She was so startled she almost jumped. Whirling around, a bespectacled young man stood behind her.

Could it be? As her eyes grew huge, the blood drained from her face.

“Uh, miss,” he said, clearly concerned. “Is everything all right?”

“I—uh—yeah, sorry. I’m all right,” she managed to say, but still continued to stare. He was hardly as fashionable as the metrosexuals and neo-preppies back in New York. With his gray corduroy sports coat, pressed blue shirt, and belted brown high-cut trousers, he looked very much like a teacher from twenty-one years ago. He wore his dark blond hair mid-length and feathered, in a left side part; and he had a serious, earnest sort of face, narrow, but with a firm jaw, defined chin, and a long, straight nose.

But the most noticeable thing about him was his glasses. His huge brown-tinted plastic frames seemed to cover half his face. They looked ridiculous, but they somehow intensified his eyes, which were very blue.

It was him. It was definitely him. Mr. Forrest.