A Story in Stones: Portugal’s Influence on Culture and Architecture in the Highlands of Ethiopia 1493-1634 (Updated & Revised)

This newly updated and revised second edition of A Story in Stones explores the relationship between Portugal and Ethiopia during the XVI and XVII centuries from the unique perspective of stonework. Through research and many years of working in the field, J.J. Hespeler-Boultbee examines the first early Renaissance links between the principal European superpower of the day and the ancient Christian empire of Ethiopia’s Highlands – using contemporary architectural vestige as a catalyst for his findings.

What began as Portugal’s mission to discover an unknown world soon became a quest to find Prester John, the legendary Christian priest/king presumed to be living on the far side of Islam. In an attempt to form a Christian military alliance, the search was both concluded and, in a manner, initiated by explorer Pêro da Covilhã in 1493 with his overland journey to the Highland court of Emperor Eskendar. This was instrumental in setting up a string of ties between the two nations – diplomatic, military, religious, cultural and (most long-lasting of all) architectural – almost three decades before Portugal’s diplomatic mission of 1520.

The fascinating story contained in the stones can yet be seen in the Portuguese and “Gondarine” ruins that dot the Gojjam and Lake Tana regions; they continue to influence today’s Highland architectural design. Hespeler-Boultbee examines over thirty different sites, many of which are remote and rarely visited. Fully illustrated with colour photos and drawings.

About the Author:
J.J. Hespeler-Boultbee is an Art & Architectural Historian and Associate of the Institute of Ethiopian Studies, Addis Ababa University. He lived for twenty-five years in Portugal, during that time making several forays into the Ethiopian Highlands on behalf of the Department of History and CIDEHUS (Centro de Investigação e Desenvolvimento em Ciências Humanas e Sociais), the research and development institute at the University of Évora. For the two year period, 2007-2009, he lived in and conducted research from Bahir Dar on Lake Tana, Ethiopia, during which time he found his historical conclusions were at considerable variance with colleagues in the History Department at Bahir Dar University – disagreements which have prompted the revisions leading to this current updated and revised edition of A Story in Stones. 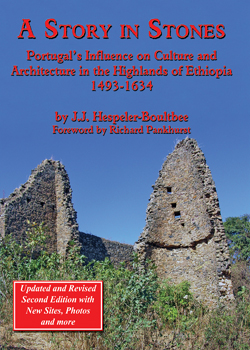 A Story in Stones: Portugal’s Influence on Culture and Architecture in the Highlands of Ethiopia 1493-1634 (Updated & Revised)