A psychologist's attraction to the prime suspect in a high-profile murder case threatens more than her professional detachment. By taking on a covert assignment in the hopes that it will distract her from her past, it only serves to threaten her future happiness unless she can solve the case and uncover the real murderer. 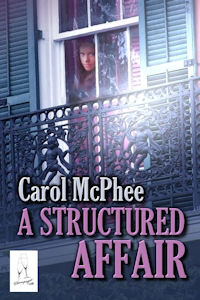 Stephen’s probing eyes raised enormous guilt within her. He might be right, but how could she learn the truth of it if she didn’t shoot out a line? “Perhaps I see more clearly than you. Your restraint indicates either you don’t care your wife has died or, the incident is eating you alive and you’re trying not to deal with it.”

He bristled. “Is that so? Well, Madame Psychologist, you should’ve taken more courses. Otherwise, you’d be more concerned about what’s going on between you and me.” His comment, said for her ears only, left her grasping for straws. His next pronouncement left her at sea. “You know that little guppy thing you’re doing with your lips makes me want kiss you.” He checked to see where Stephanie was, then bent toward her, his eyes smoky and deep.

His mouth, inches from hers, said, “Cat got your tongue, Cass?”

Her eyes dove straight to the source of her upheaval—his mouth. It curved into a smile. A smile as sensuous as if he had grazed his tongue along her lips. She trembled with the imagery. Her damp nipples peaked once again. She never anticipated her body’s betrayal here on a family outing.