Sam Loyd is a lonely writer looking for a no strings attached affair while vacationing in Aruba. Melodie Waters is an up and coming hotel executive looking for a little fun in the sun before she starts a new job. What happens when these two meet?

Sam and Melodie are drawn together by sex, but the more time these two spend together, they realize there's more between them than attraction. Will the fear of rejection and past hurts keep these two apart? Or, will an unexpected encounter help them both realize how thin the line between love and lust is? 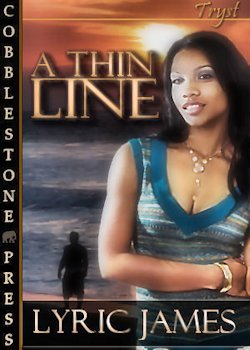 He opened the white French doors of his suite and walked out on the balcony. Since arriving in Aruba five days ago, he’d ignored the clear, turquoise water and bright blue sky. But today, it beckoned him.

He’d arranged and paid for a romantic getaway to celebrate his wedding anniversary. Before his wife had walked out on him. Before the divorce, he thought bitterly. Instead of canceling, he’d decided to go anyway. But when he walked through the doors of the suite, he regretted his decision. The king-sized bed, the hot tub made for two. The room was meant for lovers. And he was missing a lover. It had been one lonely year of writing, editing, and nothing else. His libido all but forgotten.

This trip was more than a vacation. It was a chance to pick himself up off of the dateless-no-sex floor and move on with his social life. The disintegration of his marriage had showed him that he wasn’t a one-woman man. He’d tried that with Shelia, and it hadn’t worked. He’d devoted himself to her. Gave her everything she’d wanted. She didn’t even work. But a three-thousand-square-foot house and a Mercedes hadn’t been enough to satisfy his wife. She said he worked too much. That he loved the characters in his books more than he loved her, which was ridiculous. The characters in his books paid for everything she owned.

But it still hadn’t kept her from walking out on him, or stopping her from finding someone else to give her the kind of attention he hadn’t. What he needed now was a no-strings-attached partner for the week, an in-it-just-for-the-sex woman. Nothing more, nothing less. All he needed was someone to help him get his rocks off. But unless he left his room, the only friend his dick would know was his right hand. And they had already grown way too friendly as it was.

Rubbing a hand through his short, curly, black hair, he slipped on his worn sandals and picked up his room key. It was time to escape the confines of his room and see what attractions this high-priced resort had to offer.

Downstairs the lobby bustled like an airport’s international terminal. Every nationality he could think of seemed represented—African American, Caucasian, Asian, and Hispanic. As he rounded a corner, he heard raised voices.

“I asked for a six-o-clock wake-up call. My husband and I paid fifty bucks for that breakfast cruise. We missed it because of you.”

His attention was drawn to a couple standing at the desk to his right.

“You bet your ass you’re sorry. I want my damn money back,” the angry woman demanded, ignoring her husband when he gave her arm a squeeze.

The desk clerk looked as if she was ready to loose it when another female approached the upset couple. She began to speak softly with the couple, so he couldn’t make out her words. He watched her lips move. Her lips were beautiful, luscious, and full. He could write a book about this woman’s beauty, and it would definitely be erotica. Flawless, milk chocolate skin, long sable hair, and a body any man would drool over. Hell, he was drooling. He wiped the side of his mouth.

She wore a coral, two-piece bathing suit, and one of those flowing sarong-type skirts. The long legs peeking out from underneath her skirt sent a shock right to his groin. A vision of them wrapped around his neck had his eyes glazing over. She looked his way briefly, but returned her attention to the couple, not missing a beat.

If she were willing, maybe he had found his companion for the week.