A Time Before Us

In the follow-up to “A Time Before Me” and “Falling Into Me,” Michael Holloway Perronne explores how family is determined not by the blood that flows through us but by the love in our hearts.

Mason and Joey, a gay couple in their mid-thirties, have spent the past five years in post-Katrina New Orleans trying to keep Savannah’s, a drag queen cabaret and family legacy, alive amid challenging times. When the beloved French Quarter institution is threatened with closure, Mason and Joey are left questioning not just their relationship but also their life purposes.

Friends find themselves soul-searching, too. Katie, an Asian-American lesbian, has always struggled to feel part of her adopted traditional Southern family. Can her new partner in life, Catherine, help her bridge the gap and open her heart to her parents?

Former lothario Billy Harris is unexpectedly drawn back to New Orleans after experiencing a turning point in Los Angeles. What will happen when fate finds him crossing paths with Mason, the old flame he badly betrayed?

Drag queen extraordinaire Miss Althea reminisces about the sometimes painful path she took as a little boy in Three Rivers, Ala., to her true birth on the stage of Savannah's. Does she have it in her power to be the one to save the cabaret for a new generation?

Discover in “A Time Before Us” that life’s dilemmas are best solved when you finally listen to your heart and become honest with yourself — and those you love. 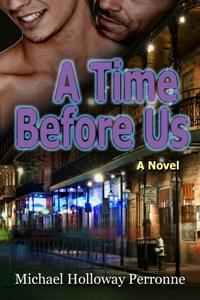 A Time Before Us

Ever notice how, just when you think you really know someone, you see a completely unexpected side to them? I have just decided that weddings prove to be the perfect time for this to happen.
“No! Not today!” my friend Katie shrieked, as she practically flung herself against the window in a bedroom of my New Orleans French Quarter townhome.
“What?” I asked, as I double-checked my bow tie in the bathroom mirror. “What's happening now Lesbibridezilla?”
“Rain, Mason! Rain!”
As “best person”, it was my duty to get Katie prepared and dressed for her wedding to her long-time girlfriend, Caroline. If someone had told me just a couple of years before that Katie would be dating anyone, not to mention marrying, I would have laughed in their face. Katie had always been a player, sort of a girl-on-girl Casanova. When she moved from San Francisco to New Orleans to be closer to her family and shake things up, I had wondered if she'd slow down a little with going through every girl like the latest upgrade to an iPod. The non-stop partying in the Quarter appeared to send her into overdrive, and I swear to God, she must have known, in the Biblical sense, practically every lesbian in a ten-mile radius. She'd refer to me and my boyfriend, Joey, as the “old marrieds” since we tended to be happier with a DVD and bottle of wine instead of the clubs on our off nights. But then one day, she met Caroline, a girl who was so amazing, I would have snapped her up if I had been a lesbian. With a little poking and prodding from Joey and me, she realized what a catch she had found.
“You're going to look back and think that you're the world's biggest idiot if you don't snap this girl up,” I had lovingly advised her.
I don't know exactly what had really convinced her to give things with Caroline a shot, but something changed. I saw Katie fall in love for the first time right before my eyes, and I couldn't have been happier for her. After a couple of years of dating, including one year of living together, they announced they would have a wedding.
Katie, who had always been critical of those who worried themselves with any sort of tradition, suddenly became obsessed with planning the perfect wedding like a bad reality TV star. Things such as cakes, venues, food, invitations, and seating arrangements became her obsession. Caroline appeared quite happy to let her handle all of the arrangements. Katie had even dyed her shockingly pink streaks of hair a dark red for the wedding and the photos to present a more classical look.
“It's not supposed to rain,” I noted, walking back into the bedroom.
“Well, it is!” she said, practically on the verge of tears. “How can we have an outdoor wedding if it's raining? Oh my God, everything is ruined!”
I ran up to her and grabbed her by the arms.
“Okay, breathe,” I told her.
“But...”
“Breathe!” I repeated. “We'll work it out.”
“Caroline asked me what we would do if it rained and do you know what I said?”
I shook my head.
“I told her it wouldn't dare rain on our wedding day. How stupid and naïve was that?”
“Okay, honey, look,” I started, keeping my voice soft, “we'll come up with something. We'll have it inside if we need to.”
“But that's not what I planned!” she cried, gripping the sides of her cream white pantsuit.
“Sweetie, it's just life, and besides, everything with your marriage won't go as planned. You have to learn to just take what you're dealt and run with it.”
She looked back out the window and shook her head, not looking convinced at all.
“Maybe this is a good thing,” I suggested.
She looked back at me with a look clearly suggesting I should check myself into the nearest psychiatric hospital immediately after the ceremony.
“How in the hell can this be good?” she asked in a challenging tone.
“Well...” I said, struggling to come up with an answer to this one. I should think more before opening my mouth. “You know how rain cleanses things. It represents birth and life and...”
Her eyes looked blank. I wasn't sure if she was buying any of this.
“Maybe an outdoor wedding in the rain with all of your guests getting soaking ass wet...well... it's you in a way. You've always wanted to add your own touches to things to be memorable. The guests certainly won't forget it, and I'd be willing to bet that Caroline would marry you in the middle of a hurricane. She loves you that much.”
With that last line, her face softened. She smiled and a few tears escaped from the corners of her eyes.
“You really think so, babe?” she asked hopefully.
“I know so,” I replied, placing a kiss on her forehead. “Now let's go get you married.”
At that moment, a stream of bright sunshine shone through the window, and just as fast as the rain had started, it had stopped.
“Look at that,” I told her.
Katie took a deep breath. “It's going to be okay.”
“More than okay.” I took her hand, squeezed it slightly, and added, “Come on. Your bride is waiting.”
She relaxed, smiling as I led her out of the room and into the courtyard.

The courtyard outside my home in the French Quarter had been decorated beautifully for an evening wedding. Tea lights in white paper bags illuminated the area around a koi pond while a few more floated in the water. Centerpieces of beautiful bouquets of white roses, Caroline's favorite flower, adorned every table. The effect was simple yet elegant.
During the ceremony, I stood next to Katie with her ring in my pocket, waiting for just the right time as the lesbian minister from a local MCC church started the ceremony. I had never seen Katie look so happy and peaceful. Caroline, smiling, stood next to her.
The two of them fit the cliché of opposites attract in almost every sense. Where Katie was loud and boisterous, Caroline was humble and laid back. Katie had her psychedelic streaks of color in the middle of her jet-black Asian hair, which she spiked as high as industrial strength gel allowed. Caroline always had her light brown hair pulled back neatly into a ponytail. Katie planned events for clubs and parties and Caroline taught fourth grade. Yet they worked somehow. The whole yin and yang thing with them just fit perfectly.
The guests had been seated in a semi-circle around the koi pond to face the wedding party. I noticed Katie's parents had made it to the wedding from Lafayette and were sat in the front row. Her mother wore a tasteful pink suit with a white rose pinned to the lapel, and her father wore the standard navy suit, white shirt, and red tie. Katie hadn't been convinced they'd show up. She lamented constantly that her Southern belle mother and good old boy father never had a clue what to do with the wild child they adopted from China as a baby. I knew they loved her even if they didn't always understand her. I knew, whether she would admit it or not, how happy she was to have them here.
As the minister spoke of the importance of all types of commitments in life to ourselves and others, I caught Joey's eye. It was a miracle I could see him at all since he sat directly behind everyone's favorite drag queen, Miss Althea, who wore the world's largest pink hat adorned in red roses.
Joey smiled at me, and I swear to God, I felt butterflies in my stomach. Dressed up in a simple dark suit and red tie, he looked just as handsome as ever. His mixed black and white heritage had given him a café au lait complexion that never appeared to age. His body had filled out a little with age, but in all the right ways. Add his green eyes and the man still took my breath away.
I guess for a guy firmly in his mid-thirties, I still looked fairly fit. However, my suit pants were just a little tighter than the last time I wore them. And, okay, I admit it, I’d begun coloring a few gray hairs. Every now and then I felt just the slightest self-conscious around Joey, but then he’d put his arms around me. All those fears would soon wash away.
It amazed me that I still felt that way after being together for over five years now. I was more in love with him every passing day. No one had ever been as kind, warm, and considerate with me as he had been, but I was petrified of disappointing him. It was this fact that had led me to be not quite one hundred percent honest with him lately, and that would end up being one of my greatest regrets in our relationship.
The girls exchanged their vows, and Katie had to elbow me and say under her breath, “The ring, Mason.” I had gotten so caught up in my thoughts about how I would tell Joey some very disappointing news that I hated to admit I wasn't paying very close attention.
“Oh, yes, sorry,” I noted, reaching into my pocket and pulling out the ring.
Katie looked like she was fighting back a giggle, which made me feel better knowing she was more amused by my lack of concentration than anything else.
“I now pronounce you...” the minister announced, pausing for obvious dramatic effect, “partners in life.”
All the attendees clapped and cheered as the two newlyweds kissed. I couldn't help it when I a few tears welled up in my eyes. Katie and I had been through so much together since we first met years ago in San Francisco. If she felt just a fraction of the happiness with Caroline that I felt with Joey, then I knew exactly how filled with love her heart was at this point.