Annie Cook is a widow with a six-year-old son, Josh.

UPS driver, Cord Williamson is a widower. It is Christmas and neither is happy with their situation, until they finally meet.

When they meet, they turn out to be a perfect match in many ways. Annie Cook needs a kidney and Cord turns out to be the perfect match, but Annie doesn't know it. Could he give Annie a Christmas present that she will never forget? If he did, he would literally be part of her life by saving her life. 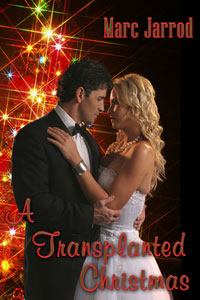 After reading the letter a third time, Annie asked, a stern tone in her voice, "Where is he, Patti?"

"I don't know, hon. I found the note on the ground by the porch. I think it was taped on the doorknob and must have fallen off and I just found it this morning when I felt something underneath my shoe. I wish I knew what was going on, but I--" She mumbled, "Oh, my God."

Annie's eyes widened. "What is it, Patti? You know something, don't you? Is Cord okay?"

Patti had no idea what to say or for that matter, how to say it. She had a very strong sensation on where Cord was, but didn't want to break it to Annie, just yet until she was absolutely sure.

The PA system announced, "ICU visiting hours are now over. You may see your loved ones again in forty-five minutes."

Patti was lost for words and was thankful a nurse came in the room.

Patti said quickly, "I need to check on something. I'll see you in a little bit, okay?"

As soon as she left the ICU, she heard a squeaky voice yell out, "Aunt Patti!"

She turned around and saw her nephew along with an adult.

Josh ran to her and Patti knelt down to pick him up.

"Mommy's doing fine, Josh." She looked at the adult standing nearby who appeared to be in his sixties. It was James, Annie's neighbor. "Why is Josh here, James? Shouldn't he be in school?"

"There was a power failure at Josh's school. He came to my house and so I thought I would bring him to see his mother. He had been asking about her. Actually, I was wondering how she was doing, too."

"Umm, unfortunately, hospital rules say he can't see her due to risk of infection. If you want to see her, you need to dress in clothes like those that I am wearing. See the nurse at the station and she'll set you up. Listen, has Josh eaten?"

"Okay, I'm going to the cafeteria and grab something. Tell Annie, I'll be back in a little bit."

When the man went to the nurse's station, Pattie followed him, but got the attention of another nurse and whispered, "Can you give me the name of the patient who donated the kidney to my sister, Annie Cook?"

"I'm sorry, but we can't divulge that information unless the donor gives us permission."

Patti closed her eyes in frustration. Of course. She completely forgot. She and Josh left the ICU area and Patti, through sheer luck, thought if she perused the patients' names outside their rooms, she might be able to prove what her instincts were raging through her.

She decided to start at the floor they were already on. She took hold of Josh's hand. Walking down the corridors, she looked at each name outside of each patient's room. So far, nothing jumped out at her.

They were about to head toward the last two beds at the end of the long hallway, when Josh saw a drinking fountain and stopped abruptly to get some water with the help of Patti lifting him up.

After he quenched his thirst, Patti decided, too that she would take a sip from the fountain. When she finished her drink, she looked around for her nephew.

Disappeared. Oh, my God! She frantically looked in all directions, then saw an elevator at the end of the hall. Oh, God! I hope Josh didn't go in the elevator. Patti looked behind her to see if he would he reappear out of midair.

Josh stood at the entrance of a patient's room directly in front of her. Patti was about to motion for him to come out of the room so as not to disturb the patient.

Josh looked at Patti, then pointed toward a bed a patient was lying in.

Patti narrowed her eyes and walked to the room. When she entered the room and looked at the patient Josh pointed to, she almost went into a catatonic state.