A Tribute Anthology to Deadworld and Comic Publisher Gary Reed

In this tribute anthology to Deadworld, and its publisher Gary Reed, we’ve collected stories that take place in the Deadworld universe.

Deadworld is a graphic novel series that started in 1986 (and continues till this day) that follows survivors in a post-apocalyptic world brought on by zombie attacks led by the King Zombie, an intelligent zombie. The Deadworld universe has so much more to offer than just humans slaughtering zombies. 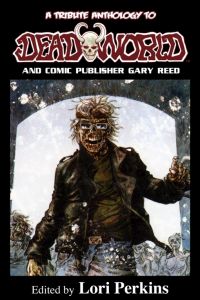 A Tribute Anthology to Deadworld and Comic Publisher Gary Reed

There was a perfect storm of talent in the Detroit area that Caliber was able to tap into. Vince Locke, James O’ Barr, Guy Davis, Mark Bloodworth and others were local and all had strong creative voices with stories they were interested in telling. Gary was smart enough to let them do just that. He didn’t stop at the local people though. He brought in dozens— possibly hundreds— of creators and showcased their work in the pages of books that he published. I was lucky enough to be one of them and to work with Gary directly on a day-to-day basis in the office as a Production Manager when I joined him about a year into his adventures in publishing.

The Caliber ranks read like a Who’s Who of Comics for the coming decades.

Jim Calafiore, Mike Allred, Philip Hester, Paul Tobin, Ed Brubaker, Patrick Zircher, David Mack, Stuart Immonen, and so many others did Caliber titles and with one over-arching reason; creative Freedom. For me, more than any other aspect of the man or the company, Gary’s willingness to just get out of the creators’ way and let them tell the stories they wanted to tell was the thing that made his company unique—there were no editorial edicts, no continuity to adhere to, no house style. From the zany to the macabre, to the surreal and just plain strange, Caliber published it all. A lover of history and art, Gary created Tome Press, a unique imprint to handle the more literary works that he wanted to adapt into comics. Where else could you see a comic book retelling of El Cid?

Gary’s impact was also felt on the people inside the company who worked behind the scenes. Nathan Pride, Joe Pruett, Chester Jacques— people who shared Gary’s passion for comics and good storytelling— their lives were all changed by knowing and working with him.

Gary’s efforts extended into the comic book convention arena as well, with extensive work running conventions in Detroit over the years. He spent time as the head of McFarlane Toys and working with his old friend Paul Burke from Stabur Graphics.

The impact of Gary’s work on Deadworld with collaborator Vince Locke can’t be understated. Began by Stuart Kerr and Ralph Griffith along with Vince, Gary took over writing and publishing efforts and helped to build an audience for this post-apocalyptic zombie comic book — a comic that pre-dated the popular Walking Dead by more than a decade

From “Guitar Girl” by Jason Henderson

Something growled far off and she looked out towards the horizon. “Dana!” Taya yelled, and Dana dipped back into the van to look out Taya’s slat. At first she didn’t see anything except some grain silos. Then she heard Farley say her name as the wind shifted and she heard the growl again.

There was a motorcycle coming over the horizon.

She felt the blood drain from her face. She heard Farley say, “It’s the King, let’s go.” She slammed the door shut and felt the van lurch. “I’m taking the trestle. Hang on.”

The King. The King Zombie. The one fucking smart dead man she had ever heard of. Dana turned to the girl as she rested the nose of her gun on the slat. “Get beside Beau and strap yourself in with those safety belts. We’re gonna be going fast and bumpy.”

She looked back out. He was clear now, moving fast even as the horses and the carriage came off the road, narrowing the gap between themselves and the train tracks.

Farley would wait until the last minute to lead them up onto the tracks, right at the bridge.

The motorcycle was flying along the barren fields, dirt kicking up a cloud behind him. He was just a mile and a half away and closing. Its rider wore leather, head to toe, except a flare of red she could see already—a handkerchief. She was taking this in, his face still a blur, when the creature called King Zombie raised its left arm, spreading its black-gloved fingers. Like a silent call.

Then she heard the answer: a moan that spread through the air, magnified through repetition. She stole a glance away from the approaching rider and looked out between Farley’s boots.

There were dead climbing over the banks of the river.

A shot rang out and Dana looked out the left slat to see a puff of mud explode not far from the motorcycle. Farley had decided to shoot at the King. That made sense. Dana fired with the Glock, her arm bouncing wildly. She held it in both hands, coolly exhaling as she took aimed at the center mass of the King Zombie. He was getting closer, about 200 yards off and closing.

The carriage lurched hard and they heard a burst of hammering sounds, bam-bam-bam-bam.

“What was that?” shouted Taya.

Dana didn’t fire and looked back. “We just went up on the tracks. Hush now. We need to get across the river and it’s going to be hard.”

She jammed her arm into the slat and held the Glock, aiming while the gun and the carriage and the approaching target all bouncing out of sync. She exhaled again. Pulled.

She saw a tuft of leather explode on the collar of the King Zombie’s leather jacket.