Ryan has never done anything with another man in his life and yet Pedro, ostensibly straight himself, is enjoying carefree, anonymous sex whenever he wants it. Ryan can’t help but give in to temptation and taste the forbidden fruit. But is he also becoming attracted to Pedro? 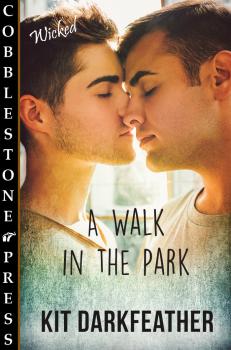 The words in my physics textbook turned to hieroglyphics and the dorm room started to spin. I flung the book aside and collapsed on my unmade bed. I couldn’t do this! I couldn’t keep up with this incredibly difficult material. But I had to. My university scholarship depended on it. If I didn’t maintain a certain grade level, I was done. Out. Sent packing.

I didn’t want to leave. I had dreamed about college all through my miserable high school years, longing to get out on my own, make adult decisions, and be taken seriously. I wanted to make something of myself. None of that would happen back home in the dreary town of my birth.

One other thing I’d been hoping for from a life lived on campus was to get laid a lot more often. It wasn’t like there weren’t a good many women around, lots of them were pretty, all of them at least reasonably intelligent—quite a few were even friendly. But I didn’t have time to take anybody out. I couldn’t spare the hours to go a-wooing. Virtually every waking minute not spent in classes had to be devoted to study just to try to stay abreast of what the professors were teaching.

It was exhausting—mentally, physically, emotionally. The only part of me not overworked the past couple of months was my dick. I wanted to put my cock into a warm body so badly I could cry. But preliminary rituals had to be satisfied before I could get that far with anyone I’d met at school.

What was worse was that I would have been delighted to take my time with some girl, get to know her, move gradually toward a place where we could go to bed together, enjoying it all the more for our familiarity with one another. But unless I could do all my studying in a parallel dimension, I would have to continue to forgo socializing, romance and, mostly definitely, sex. I had a nightstand drawer full of condoms going to waste. Hell, most nights I was too tired even to jerk off. Pathetic!

My dormmate, Pedro, found me in this depleted state when he came in around eleven o’clock that night. He was pretty much in the same boat as me, here on a scholarship and overtaxed by studies—it was why we were roomed together, I guess.

When he came into our shared little room, there was a goofy smile on his face. He had thick, dark hair, rather handsome features, and a trim, taut body. “Hey, Ryan. Another hot date night with your books?”

He chuckled and went to sit on his own bed, tugging off his shoes. “Yeah, that class is breaking my balls too.”

I lifted my head and frowned at him. “You sure don’t look stressed.” I was immediately sorry for the accusatory tone of voice. Pedro was a cool guy. We got along well.

“Well…” The goofball smile returned. “There’s ways of, y’know, relieving stress.” He took off his sweatshirt and started peeling off his T-shirt, obviously getting ready to get into bed and go to sleep.

I was too tired to undress and do the same. I stared at him, going over his last statement. What did he mean by…? Then the meaning came into sharp focus.

I sat up. “Hey, did you get laid?” Again, it sounded like an accusation, but I was also happy for him. At least someone in this dorm room was getting some pussy.

He’d just finished taking off his jeans and dropped them in a ball on the floor, now sporting only a pair of snug briefs as he sat on the edge of his bed. A cagey expression crossed his face. He softly bit his lower lip. Finally, he said, “Not quite. Not laid, per se…”

“Then what per the fuck se?” Somehow it had become critically important that I know. My heart was skipping a fast tempo.

Pedro laughed, but it was a nervous sound. I could see him debating with himself, like he wasn’t sure I could handle this, whatever it was.

I gave him my best puppy dog eyes and asked, with a plea in my voice, “Please, won’t you tell me? If I can’t have sex, at least tell me a dirty story about you. I promise I won’t blab to anyone.” I added that last because it suddenly felt like that might be the reason for his reluctance—he had a secret and needed to know he could trust me.

Then it hit me. William Suchy Park, named after some old-time philanthropist. It was a city park a few blocks from the west end of campus. Did he mean that place?

He was peering at me. “You don’t know about Suck Park, then?” he deduced from my no doubt bewildered expression.

I solemnly shook my head. Fatigue had fled me. I sat across from my dormmate, rapt.

I was stunned. Pedro was talking about gay sex. I sure as hell was no homophobe, but I had never suspected my fellow dormer of having any queer inclinations. That realization stirred something deep in me, too far down right now for further examination.