Maxim Jakubowski takes the reader through an intoxicating journey through four of the world's most exciting cities: New York, Dublin, Paris and London.

A WASHINGTON SQUARE ROMANCE In a Manhattan hotel, an older man mourns and recalls his past affair with a younger woman as he crisscrosses New York's Greenwich Village and further afield in search of the ghost of her body and her love. Where geography meets flaming erotica!

MOLLY, YOU HAVE 4391 WORDS, START NOW... A young American woman visiting Dublin parallels Molly Bloom's soliloquy from Joyce's Ulysses as she undergoes a harrowing sexual ordeal that takes her past many of the Irish capital's best known spots. The reader will never think of Dublin in the same way again...

AN UNRELIABLE GUIDE TO PARIS HOTEL ROOMS A man explores sex in a variety of Paris hotels. Each room features further variations on the games of the flesh and the mind, as he comes to grip with the palette of women he has made love to in the past in this city of love and how they fit in to the puzzle of his sexuality.

WOKE UP WITH THAT HAMPSTEAD BLUES AGAIN Abandoned by his lover in North London, a man embarks on a mini odyssey of sexual discovery through the distinctive map of north London, with passionate and disturbing encounters with a Spanish woman, a beautiful submissive and a club of doms who organise anonymous gangbangs.

Challenging, sexy to the extreme, these stories unfold with elegant and literary style and introduce a new vision of erotica as a battleground for not just sex, but also strong emotions and raw feelings. 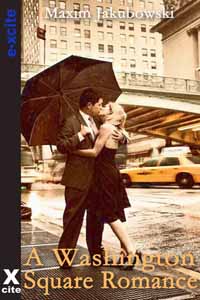 She barely had time to drop her luggage to the floor before he wanted to undress her. He had been waiting in the hotel lobby for her fifty bucks taxi ride from the airport to reach the city, reading a magazine, distracted by every new arrival. As she ignored the doorman and ran towards him, he smiled broadly. She embraced him, squeezed him against her, and all the pain and anguish of yesterday’s disaster faded away in an instant.
They called the lift, and although not alone in it, she felt his hand caressing her arse through the thin white linen skirt she was wearing.
‘I want to see you. All of you,’ he said as he took a step back from her once they entered the fuchsia-coloured room.
She quickly slipped out of the skirt and he pulled the Strangers in Paradise tee-shirt over her head. She was bra-less. Had never really needed one. He sighed as he saw those nipples again whose shade he could never quite capture in words, an ever so subtle variation between pale brown and pink he had never witnessed on any other woman he had seen naked before.
His breath caught in his throat.
She laughed and approached him. Pushed him back onto the bed and straddled him.
Outside, the cold February sun illuminated the recently refurbished arch, like a stone rainbow at the southern extremity of 5th Avenue, towering above Washington Square while dogs ran loose across the park and small children laughed and shrieked on their swings and hardy squirrels scampered over the sparse grass and the chess players in the South East corner of the park pondered and ruminated on and on and all was well with the world.