A Wetback in Reverse: Hunting for an American in the Wilds of Mexico

Our hero, let's call him Freddy for the sake of confusion, treks to the land of his forebears ~ that unique land of many names, but to the confused and disillusioned, we know it as Mexico. Why is he there? That is the question! He suffers many diversions, many distractions. Many deceptions and many disillusions befuddle his perceptions of this land of mystery: it is lush and lovely, hellish and horror-filled, full of music and full of muckrakers...
It also turns out that he is there as an illegal alien while searching for the answer to a mystery. But Freddy doesn't know he is there illegally. He only knows that Life has played a trick on him, and instead of persecuting so-called Wetbacks within the borders of America, he is now a so-called Wetback trapped in the land of his forebears, persecuted by the government, and trying to reverse a very trifling conundrum of misunderstandings borne of the great mystery that caused him to end up in a land where he'd thought never to go in the first place!
With laughter in the heart, he runs from the so-called Federales while indulging in all the adventures that Mexico has to offer. Hence, his troubles increase, and tribulations bedevil him as he tries to find a way out of one trying mess after another. Meanwhile, he meets a man he never knew existed but would prove to be the link to the Past he sought, and make sense of all the confusion. But, all the while these troubles chase him back to the American border.
The wise men say, in so many words, that nobody knows like Mexicans know the troubles that Mexico knows. Therefore, to luck we entrust the resolution of this muddle-some plot, and to the good graces of our readers. So, read the book and the plot might finally make sense to you. And, when it does, then tell us all about it!

About the Author:
Frederick Martin-Del-Campo, also known as Frederick Martin-In-The-Fields, is a writer/author with a growing reputation among itinerant, avant-garde artists and other writers in California. His writings are now available through international literary venues, and he edits his own blogs, CHILDREN OF ANGER, and the increasingly popular LAST OF THE RED HOT PERVS. Frederick is a native of California. He worked as a teacher of History and ELT studies while pursuing his calling as writer.
His most recently published book is the powerful THE MEDITATIONS OF MISERY, which reveals the workings of a mind in permanent suspension from reality. His grandiose opus, CHRONICLES OF WAR AND A WANDERER, has received rave reviews both by individual readers as by professional reviewers since it was released in 2007.
His poignant biographies of his ancestors can be procured in a two volume series: BOUND FOR THE PROMISED LAND. He reveals his mastery of the thriller genre with his 2004 release of THE ISLAND OF ESTASIA. Upon undertaking these difficult projects, he felt they would enrich the literature of American and International lore. He has also published a highly-regarded poetic anthology of his own entitled, ON THE HILL OF CONTEMPLATION.
His latest contribution to literature, A WETBACK IN REVERSE, could be described as a labor of love and hate as it recounts his experiences and tribulations in Mexico as he sought to find a way home after being left for lost during a crucial time in his life. 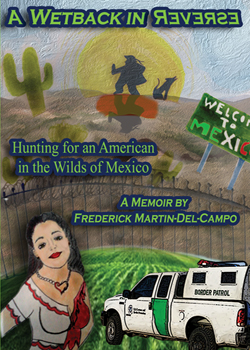 A Wetback in Reverse: Hunting for an American in the Wilds of Mexico