"We each choose a kink to use with each other when we meet? Is that what you're suggesting?" Ian hasn't dated for ten years and this forwardness in modern women is an innovation he can happily live with. But the cold war his and Alicia's families have been fighting for decades, and the snowy northeastern winter, will make their relationship a very wintry affair. Alicia is trying to salvage the wreck of her family's old business empire and establish herself as a leader in the town. Ian's 'choice' of spanking her behind, however innocently meant, raises mixed feelings about his motives. Ian is struggling to establish a real estate business in a dying one industry town and from a background that's fiercely anti-business. A secret affair is all they can hope for so long as their parents are alive, but their love is too strong to be satisfied with that. 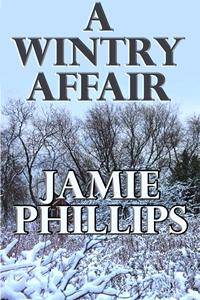 "Are you and Sam ever going to name a day?" Alicia's father, Domenic, asked next morning as they had their usual silent breakfast.

Alicia observed him for a moment, trying to guess if he'd heard something about her meetings with Ian. His question was so sudden, so unlike him that she was immediately on her guard.

"I'm not sure, Dad," she said calmly, though her heart was racing. "I like Sam a lot, but marriage needs more than that."

"He's a good man," her father commented, "better than most of the deadbeats in this town."

"If I didn't know Sam's good qualities, I wouldn't have gone out with him so long," Alicia snapped, irritated by his persistence.

"Marriage isn't just about love, Lissy. People have arranged marriages for centuries between folks who've never met, and they've got by just fine."

"Not in this country they haven't," Alicia retorted. She longed to ask 'is that why Mama left? Because you thought marriage was a goddamn contract?' Instead she asked, "What brought this on?"

Her father shrugged. "I'm not getting any younger," he said, "nor are you."

"And you don't think I can run the business without a 'good man' watching over me," Alicia retorted.

"I didn't say that," her father protested.

"But it's what you're thinking," Alicia replied.

"You're forgetting I've let you run things since that useless brother of yours left," her father said grimly.

"And before he left I was just a glorified secretary," Alicia snapped.

"You were learning the business, same as I made your brother do."

Realizing they were getting into dangerous territory, Alicia shrugged. "If you say so," she said. "That's not what it felt like to me."

Her father, too, recognized the danger. "I wasn't really prying or pushing when I asked about you and Sam," he said. "I was just making conversation. But if he's not right for you, you should move on. Don't waste the best years of your life on something that isn't working."

Alicia smiled; willing to be conciliatory, but whenever Dad offered advice it riled her. All his mannerisms were autocratic, a by-product of his life of wealth and power.

"You're probably right, Dad, but I don't have a lot of time right now, with the economy the way it is. We're struggling."

"The economy is always the way it is, Lissy. Don't wait for it to be different, or you'll end up with nothing and nobody."

"I'll keep my eyes open," Alicia said, leaving the table and kissing him on the cheek as she passed him. "But there isn't a wide selection in this town."

Alicia's desk phone rang. It was Ian. She picked it up and coolly looked around the outer office to be sure no one was nearby. Her office, once her Dad's, had been built when the boss watched his subordinates every minute of the day through huge glass panels that gave neither the boss nor the workers any privacy.

"Hi," Ian replied. "Can you get away today?" Her work was more restrictive than his, and their meetings depended entirely on her schedule.

Alicia knew she should say no, but she couldn't. If he asked her to, she'd leave work now, at nine in the morning and a cold wet morning at that, to meet him in the woods outside of town.

"Okay," she said, still scanning the office for eavesdroppers, "I'll be there."

"You sound strange," Ian said. "Is somebody with you?"

"Yes," Alicia lied. "I'll see you later." This wasn't the time to tell him about her father's strangely knowing breakfast conversation and, anyhow, it probably didn't mean anything. It could have been a coincidence, or somebody from the town may have seen something and hinted their concern to the Sandrins, the old couple who managed the Alessandro house since before even Alicia's older brother was born, but the most likely place for Dad to hear it from was this office. So she had to be more careful in future because if Daddy was hearing whispers then Sam, whose office was only one floor down, would hear them as well. She hung up the phone after Ian's 'love you' and nibbled her lip, something she'd tried for years to stop doing but still did when she was upset. She should dump Sam. It was the honest thing to do, but she'd tried more than once and couldn't. He was just too nice, and his constant, undemanding, attention had become a fixture in her life. Sure they'd marry someday, just not yet.

Alicia watched Ian's SUV pull carefully into the space beside her car and smiled at him through the rain-spattered windshield. She let Ian get out of the driver's seat and into the back seat of his car before she left the comfort of her own car and stepped up into his. Their eyes met and held while they fell together, lips locking, arms crushing the breath from their bodies, in an embrace that neither wanted to end.

"I miss you so much when we're apart," Ian whispered as they lay uncomfortably together against the door catching their breath. "What are we going to do?"

Alicia froze. "We keep meeting like this, I guess," she said warily. Why was everyone springing surprise questions on her today?

"We'll get caught. You know we will," Ian replied. "When spring comes, this place will be crawling with people."

"We'll find somewhere else," Alicia said. "There are motels and hotels, and empty houses you're trying to sell. I could be a potential buyer, no one would know."

"Everyone knows you around here," said Ian, but the thought of the price of a hotel room coming out of his bank account every other day made him go weak. The payments to his ex-wife already constrained his spending on even basics. "People would wonder why you were viewing properties and your man, Sam, would wonder why he wasn't viewing them with you."

Alicia shrugged petulantly. She didn't want to think any more about the difficulties, only the pleasures. "So we'll think of something," she whispered huskily, running her fingertips along his cheek, feeling the tension locked in his thin frame through the rigid set of his jaw. "But for now let's enjoy the moment. What is your pleasure today, Sir?"

"My pleasure is the same, only different," Ian replied.

"How different?" asked Alicia, undoing his jacket and shirt to run her hand across his chest, his nipples hard against the palm of her hand.

"You'll find out soon enough," said Ian. "Were there any marks last time?"

"You are pretty," Ian agreed, "and tough, which is good for today's pleasure."

"You didn't praise me for my obedience, Sir," Alicia said, stretching out her legs to show off her skirt.

"I noticed," said Ian, "and I'm pleased. It's a bit long but perfectly acceptable."

"I'd raise some eyebrows wearing a short skirt on a day like this," Alicia protested. "You would like that even less."

"I said it was okay," Ian said, taken aback by Alicia's sharpness.

"Well, it wasn't good enough. If you want me to do your bidding, you'd better smarten up your ideas on what constitutes positive reinforcement."

"Okay," Alicia responded severely, "so where were we?"

"You were about to go over my knee," Ian said.

Ian sat up and hauled Alicia upright with him. Her eyes sparkled with mischief, and he was immediately suspicious.

"What is it?" he asked warningly.

"What do you mean?" Alicia asked innocently.

"You know what I mean. What's got you grinning fit to bust?"

"I'm just happy to be with you and having fun," Alicia replied.

"Well," said Ian, "I've no doubt I'll find out soon enough." He tugged her arm and helped her across his lap.

"Maybe, if you're lucky," Alicia replied. She wriggled into a comfortable position, pleased she wasn't as tall as she'd wanted to grow as a kid, or her head would be bumping on the far door. She folded her arms under her head. It was so good lying like this that she wanted to stay this way forever. When Ian had told her his choice, her heart had thumped in anticipation. He thought he was getting two first choices and, she'd soon discovered, so did she. Even last time, her first time, she'd felt at home, safe and secure, lying across his knee.

"Boots off," Ian said, lifting her foot and unzipping her calf-length boot. He threw it into the front seat and a moment later did the same with the other one.

"My feet will get cold," Alicia said, dreamily repeating her words from last time. She wondered briefly if she was starting a pattern.

"I think they'll be warm enough when I get started."

"Will that be anytime soon, or should I bring a book in future," Alicia giggled.

Ian slapped her bottom firmly and smiled grimly when she gasped in surprise.

"Forgotten how much it stings, hadn't you?" he asked sarcastically.

"I remember that I had to encourage you last time," Alicia reminded him.

Ian shook his head sadly, watching her sleepy smile broaden at the implied threat. He actually didn't want to start, she was right in that. He was drawing out every moment, smoothing her skirt over her cheeks, adjusting his legs to raise her upturned bottom, plumping it out beautifully, for the sooner he started the sooner it must end, and the anticipation was as good as the execution.

Ian patted her cheeks and felt them trembling expectantly. He raised his hand and slapped her hard. Alicia gasped and her legs kicked. Ian slapped again, settling into a steady rhythm that soon had her squirming on his lap.

"More exciting now, isn't it?" Ian asked when he gave her a rest.

"A bit," Alicia admitted, "but a good book would pack more punch."

"Very well, young lady," Ian replied, tucking his left arm under her waist. He began a flurry of sharp, glancing smacks that had Alicia squeaking and wriggling desperately.