Two men are after the same woman but for very different reasons.

Dark-haired beauty, Jolene Dubois has a serious problem, and it's not just battling alcoholism.  Late at night, she receives whispered calls.  "Jolene, I want you. I'm coming for you."  Shivers climb up her spine and ice flows in her veins. What does he want? Who is it?  She must figure it out before she trusts the wrong person.

Jake Farrell, the handsome rogue is an operator with women, but is he hiding something dark and terrible under his cheery facade. The detective, Andy Martin, who investigated her father's murder, continues to ask her out. Les Voodr, an alcoholic she met at AA follows her everywhere, and Ron Keisler, her AA sponsor is always there when she needs him. Could her caller be one of these men?

To further complicate her life, she fights a host of addictions alcoholism, smoking, gambling and sex. Jolene is determined to beat the alcohol and to stay out of the clutches of the fiend who phones her. 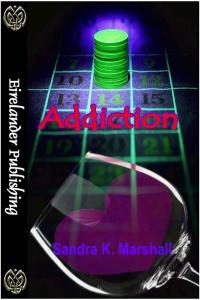 Talons of fear dug into her mind. Prickles danced down her spine. Jolene whirled. She searched the parking lot for movement, for any sign someone was nearby. Nobody.

She raised her hand to rub her neck and lifted her thick hair off her neck to cool her skin. With a shudder she paced toward her apartment.

She glanced up at the windows hoping to see someone to explain her apprehension, but there was no one. Her gaze slid across the park-like area dotted with sun-lit red and yellow-leaved trees and buildings surrounded by red burning bushes.

What was happening to her? She'd had the same experience at work when she left her office at the Odyssey riverboat casino. Every time she sensed someone staring at her, she hadn't spotted anyone. Was she paranoid?

With her head down, Jolene dug her keys from her large handbag and started to stick one in the key hole. She stopped when she saw the door ajar and looked up to see a sign on the outside that said, 'Boozing Whore' in big black, painted block letters and heard a rustling sound come from within. My God. She bumped into the beige stucco wall. Her orange crepe blouse snagged on the rough surface, and her legs wobbled as she turned to run.

Someone was stalking her.

Reaching her new red sports car, she gasped for breath as she climbed into the car and locked the doors. Her hands trembling, she rummaged in her four-hundred dollar purse for her cell phone. Finding it on the bottom, she called 9-1-1.

"What is your emergency?" a woman's voice asked.

What if the sign was just a prank? No one she knew would pull such a stunt. Jolene peered woodenly at her apartment building for a minute. There'd been someone inside her home.

"May I help you?" the operator asked loudly.

"Yes. I just came home and found my door open." Jolene gulped a mouthful of air before she continued, rubbing her palm down her multi-colored earth-toned skirt. "There was someone in there."

"Are you okay? Are you somewhere safe?"

"I'm shaken but okay." Jolene switched her cell phone to her other ear and brushed her hair out of her face, while she looked out the window. "I'm in the car with the doors locked."

Did you see who it was?"

"No, I was too afraid to look." She didn't want to sound crazy and tell the dispatcher she'd thought someone was spying on her.

"What is your name?"

"Where do you live?"

"Someone will be there soon. Stay on the line while I contact the police."

"Thanks." She leaned her head on the steering wheel, shudders running through her body as she willed herself to remain calm. She heard a voice from her cell.

"Jolene, are you still there?"

"Yes." She raised her head to look around. "Are the police on their way?"

"They should be there any minute," the 9-1-1 operator reassured. "I'll stay on the line until they get there. Tell me a little about yourself while we wait. What kind of work do you do?"

"I'm head of marketing at my family's company." She rubbed at the tension in her shoulder. "The Odyssey Casinos were started by my great-great grandfather in Nevada." She heard a slight intake of breath from the woman on the other end. The operator must've seen the news about the murders. "I better go; someone's here." Jolene clicked her phone shut.

A car drove by slowly and parked in front of her, and then a man climbed out and sauntered toward her. Andy Martin, one of the homicide detectives who investigated her father's death. Why would he respond to a 9-1-1 call?

She scrambled from her car as the sandy-haired man came up to her door.

"What's up?" His tan brow furrowed.

"Someone's broken into my apartment." Tremors shot up her spine at the thought. What did the intruder intend to do? Even with her ex-boyfriend in prison for killing her father she didn't feel safe. Who was doing this to her?

"There's a paper sign on the outside of my door, and it was partially open. I could hear someone in there." She didn't want to tell him the message written on it. "How come you're here? Don't street officers usually investigate emergency calls?"

"I was in the area and heard it on the police scanner. Since I knew it was you, I decided to swing by and make sure you were okay." His easy manner disappeared, and his gray-blue eyes became stony. Andy touched her shoulder. "Get back in your car."

"They're on their way." He gave her a pat on the back. "Hey, I'll be okay. Probably just your manager, and if not whoever was there is gone if he heard you stumbling around." He grinned at her and lightheartedly smacked his pocket. "I've got protection." He wheeled his body around and sprinted up the walk.

How like a man. They think they're indestructible. She slapped her hand on the fender of her sports car.

Could Andy be right? The manager might've gone into her apartment for some reason and left the door unlocked. Dumb, Jolene. He wouldn't put a sign like that on the door. She grabbed a strand of hair and twisted it hard. What was she thinking? That was her problem, she wasn't.

A police car pulled behind her, Jolene turned to watch two officers get out.

The first officer approaching asked, "Are you Jolene Dubois?"

"We were told you had a break-in."

"Yes, I did, but someone's already checking. He's been inside about fifteen minutes now." Andy came around the corner of the building, and she pointed at him. "There he is."

"We knew Martin was going to be here. We'll go talk to him." The policemen walked toward Andy.

What was Andy telling them? She watched the men talk for a few moments, and then saunter to their police car. That's all. She'd thought they would've talked to her again, or gone into her apartment to investigate for themselves.

The detective motioned for her.

Nobody must be there. What did Andy think when he saw the sign? Embarrassed that he'd seen those horrible words, she rushed to him. "Did you find anyone?"

"No, it's clean, but its undeniable someone was in there."

"How do you know?" she asked. Idiot. Of course, the door was open.

"Come and see." Andy motioned her ahead of him. "He left you a present."

"I'm a little scared." That was an understatement since the hair on her arms stood at attention.

"There's no reason to be afraid now." Inside Jolene's apartment, Andy led her to the kitchen. He pointed to the counter. "There."

Jolene saw a large bottle of red wine, her favorite cheapie when she used to binge. "Oh, no." She licked her lips. She could taste the fruity liquid flowing down her throat, making her forget the wrongs she'd committed, but no alcohol had been allowed in her home since she went through rehab.

Andy drew a pair of gloves from his jacket and slipped them on. "That's not all, there's a card." He picked up a note and waved it at her.

Jolene reached for the message. "What does it say?"

Andy tucked his hand behind his back. "You can read the letter after CSI dusts for prints." He pulled a plastic bag from his pocket and placed the paper inside. "I'll get forensics here to dust the door handle and other areas." He picked up the bottle. "I'll take this and the sign off the door, too. There may be some fingerprints."

"When will I be able to read it?" she demanded. Now that she knew it wasn't paranoia, she needed to know who'd do such a horrible thing to her. Only someone who knew about her drinking problem could've done this, but why?

Did they want her to fall off the wagon? Shivers surged through her body creating another dread. She couldn't start drinking again. That demon had to be controlled.

"In a couple of hours I should have some information." He gazed at her. "Do you want to drive to the station to give your report, or do you want to give it to me here?"

She glanced away from Andy. "I'll follow you to the police station. I want to know who was here." She couldn't start over againshe'd worked too hard the last couple of months to stay sober.

"Are you okay?" he asked gently.

"I'm fine." Hell no, she wasn't. Someone had invaded her home. She was afraid. The temptation to use alcohol to drive her problems away even temporarily was a beast roaring inside her. "Let's go."

What would the police find?