Isolation has become Adelaide Warren's solace. She lives far from civilization, up in the hills of West Virginia, after the end of the Civil War and the death of her husband. When Josiah Hamilton finds his way to her doorstep, nearly frozen to death one stormy winter night, she nurses him back to life.

They form a fast friendship, which soon becomes more. When Josiah professes his love for her, she refutes him. But when tragedy strikes, it’s Josiah who comes to her rescue. Now, Adelaide is forced to confront her love for him which she has both denied and hidden.

A proposal is made. Will she accept him? If she does, what does that mean for her future? 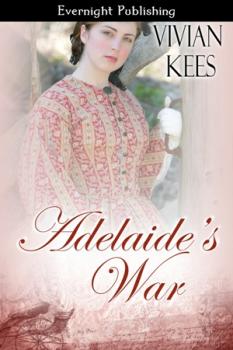 Adelaide was outside, chopping kindling when she first spotted Josiah off in the distance. Her heart leapt and that feeling startled her. He was nothing more than a stranger, and no more than a friend at most. Yet, she was overjoyed at his impending presence.

How silly, she thought. I’m a grown woman, not some girl set about waiting for a beau to court her. That part of her life had long since passed and was buried and gone along with James. Or was it?

“What brings you out this way?” she asked, upon his approach, doing her best to maintain calm and collected. Just the slightest hint of coyness tinged her voice.

“I was passing through, and I thought I’d stop in,” he said, with an added grin.

“It’s been good. This spring, planting will take a lot of work and of course the fall harvest. This isn’t our busiest time of year. And yourself?”

“I’m pretty good,” she replied. “Trapper Marg was around to trade some rabbits for my jam. She’s around quite often when making her runs. Other than that, it’s quiet as expected. Just the way I like it.”

Adelaide motioned to the cabin. “There’s coffee and fresh buns, if you’re interested. It beats standing out here in the cold.”

She poured coffee and set a plate of buns on the table before taking her seat across from Josiah.

“I couldn’t help but notice the rifle next to the door. Are you nervous being here alone? Is that why you keep it close?”

“Josiah,” she started. “I don’t kid myself about the realities of this world. And yes, I am a woman alone. This may not be the best place for me, but it’s home. Where else would I go? Town isn’t an option. I can hardly bear going there for supplies when I have to.”

“I know about James,” he said. “And the talk. Don’t let them get to you. A house in town might be better for you.” He reached across the table and grabbed her hand. “I’m concerned.”

“You’re bold. What they say about James isn’t true. I know it and I shouldn’t have to defend him to anyone.”

She resisted the urge to pull away from him, to ask him to leave. He forced her into a most uncomfortable situation, and she wasn’t quite sure how to react.

“I’m fine here. This cabin suits me fine. I’ve done so now for almost two years with no troubles. Besides, I wouldn’t fit in with…them. No, this is my home. This is where I’m meant to be.”

“In time, they would accept you.”

“They wouldn’t. They talk, they gossip and they say things…terrible things. I don’t want any part of that, ever.” She snatched her hand from his, her eyes falling to her cup.

She didn’t dare look at him. Tears clouded her vision. How dare he bring this emotion out in her?

“You know about James.”

“If it had been true, surely I wouldn’t have received the letter I did after his death from the army.”

“Would you allow me to see this letter?”

Adelaide went to the trunk at the end of the bed to fetch it. “It states that he died with honor. With honor and no disgrace. Why would they say that if it wasn’t true?”

She watched him read the letter, his lips moving silently with each word. He then folded it and handed it back to her. “Don’t believe the gossip. You need no more assurance than that letter. It’s gold and the truth. Understand?”

She did. “I never doubted it for one minute.”

“Nor should you. He was a honorable man who did his duty.”

Adelaide returned the letter to its respectable place inside the trunk and when she turned around, Josiah was behind her.

He reached out with one hand and wiped tears from her cheek, pulling her to him in a most warm embrace.

Denial and guilt overwhelmed her. It felt natural and good, yet she knew it wasn’t proper conduct for a widow. “This isn’t right,” she said, her hand pushing against his strong chest.

“I keep thinking about you,” he muttered. “Straight from the moment when I left, and I don’t know why. You‘re always in my thoughts.”

“Josiah, it was an emotional time. It was Christmas, and you almost died. It’s expected, but let’s not confuse our feelings. You’re fine now. We’re friends and nothing more.” She did a good job trying to convince him, but wasn’t entirely convinced herself.

“Friends,” he said the word as if pondering its true meaning. “What if I’m feeling something different, something more?”

Freeing herself from him, she put a small distance between them. “I’m not ready for anything more. I may never be ready.”

“Do you feel anything for me? Your words say one thing, but I think your eyes say something different.”

“I do. It’s friendship.” She bit her tongue on that falsehood. “Friendship is all I can offer you at this time.”

“I understand. If I offended you with being so forward, I apologize. It was never my intention.” Josiah turned and walked out of the cabin, leaving her feeling very much alone.