Plagued by baffling circumstances surrounding the loss of his childhood sweetheart, Adrian Birichino has spent the last twenty years trying to forget. When fate forces him to return to the town he loathes, his pervasive nightmares turn alarmingly real as a luminous angel steps out of thin air, inducing an accident that leaves his life in familiar hands. Real or not, she feeds a need burrowed deep in his soul. But if she’s just a figment of his hyperactive imagination, how had she managed to leave behind tangible evidence of her existence?

Having been catapulted to a sinister spot in time, Riley Gail must find a way to convince Adrian she is real and living in the heart of the infamous witch-hunt…else resign to be immortalized in the pages of history as one of Salem’s accused forevermore. 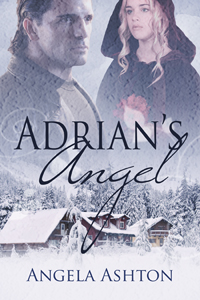 Rubbing his cursed eyes, he shook his head as if to clear the hellish fog lingering therein. It didn’t change anything. The bothersome text lay open on the table. “Impossible,” he breathed as a cold fist closed over his heart. He’d seen smoke rise as the book melted to ash. Heard the crackling rage as the famine flames consumed each and every cursed page. The stench of burning paper was still thick in his nostrils.

Nevertheless, there it was. In one piece. On the table. Open as if she intended for him to read the specified entry.

What the hell was going on? Curiosity lured him closer.

A shiver skated down his spine. The last thing he wanted to do was read horror stories. His nightmares were bad enough already without throwing witches and goblins into the mix. Closing the book, Adrian ground his molars and placed it back on the shelf.

He could be just as stubborn as she. He might have tossed it into the fire again, had he thought it would do any good.

Standing before the frost-etched window, Adrian stretched his injured leg in front of him. It was feeling much better. The snow had finally stopped falling. People would be getting out soon. Perhaps tomorrow he might feel well enough to make the journey into town and see about fixing his car. There were enough canned goods to get him through another week or so. Heaven forbid he should need to stay that long.

He wondered who owned the safe haven. He’d taken advantage of the empty cabin and its provisions. The stew hadn’t shelved itself, nor had the wood been stacked by…no, ghosts did not go shopping or wield an ax for firewood. Still, he felt compelled to do something to compensate the mystery owner for the use of his, or her, cabin.

Of course, money was always appreciated. He’d leave a check to cover the expenses. As a matter of fact, he may as well write it out now so he wouldn’t forget.

Adrian turned away from the frosty window to find the damned book was back on the table. Every muscle in his body constricted. He didn’t have to see the text to know it was opened to chapter five.

Jaw clenched, he spoke in a low venomous tone that could cower a heard of wild steeds, “Show yourself.”

“Come out, damn you, I said show yourself!”

The lights flickered. The pages of the book fanned angrily back and forth as a frigid gust shook the cabin walls. Adrian dared not permit the frightful illusion to consume him, least he be lost forever.

The ridiculous battle of wills could go on forever. If he allowed it. For his own peace of mind, he couldn’t. He circled the room. “All right! You win.” The lights stopped flickering, the pages stilled. “I’ll look at the damned thing.” As if he had a choice. He added beneath a snarled lip, “On one condition.”