All About Earthlings: The Irreverent Musings of an Extraterrestrial Envoy

Aldous Huxley wrote: "If most of us remain ignorant of ourselves, it is because self-knowledge is painful and we prefer the pleasures of illusion." One might infer from this remark that seeing ourselves as others see us - and acknowledging our very obvious imperfections - is the beginning of true wisdom.
Oscillating between parody, parable, and prophecy, ALL ABOUT EARTHLINGS is a work of hyper-realism. As author William F. Wu writes in his introduction, "[it] is journalist W. E. Gutman's most chilling dystopia. The historical retrospectives that undergird his narrative and the apocalyptic inferences they evoke prompt Gutman to conclude that humans are neither able nor willing to control their collective destinies: Greedy, hedonistic and reckless, they are engrossed in the here-and-now of their personal lives. Scouring through humankind's most sordid chronicles of cruelty and hypocrisy, corruption and apathy, suffering, despair and death, and extrapolating from the lessons they impart, Gutman envisions a scenario of otherworldly retribution that seems as fitting as it is horrible to contemplate.
"His use of a science fiction device (he doesn't maroon Earthlings on some faraway planet; instead, he transports an alien emissary to Earth and gives him a voice) only tends to harden the sinister nature of his auguries. In the process, Gutman takes on and unapologetically slays some mighty sacred cows: God; religion; the papacy; evangelism; imperialism; militarism; capitalism; corporatism; mercantilism, and consumerism, all of which, he reckons, incestuously conspire against peace and tranquility on Earth and which, should Earth survive the evils their combined influences wreak, could one day spread beyond its celestial frontiers."

About the Author:
Born in Paris, W. E. Gutman is a retired journalist. A former writer at the late-great New York-based futurist magazine, OMNI, he reported from Central America from 1994 to 2006. He is the author of eight books. 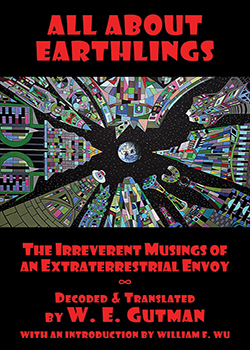 All About Earthlings: The Irreverent Musings of an Extraterrestrial Envoy