Along the Way Home

When Kate Davis discovers her beau impregnated the town trollop she longs to escape both the impending gossip and her stifling life as a society woman. Her father presents a solution—starting a horse ranch in Oregon Territory. Seizing her chance at freedom, Kate agrees.

Jake Fitzpatrick, a seasoned trail guide, is flat broke and eating dandelion greens for dinner. He can only dream of raising cattle and crops out west, until a wealthy businessman offers double wages to guide his family across the Oregon Trail. Jake accepts with one stipulation—he is in complete control.

Their worlds collide on departure day.

Kate hates following the orders of a mere saddle tramp, especially Jake’s demand she abandon all possessions he deems frivolous, including her deceased mother’s heirlooms.

Trail life is a battle of wills until tragedy strikes, stranding them a thousand miles from home and in the midst of a treacherous land the United States doesn’t yet own or govern. 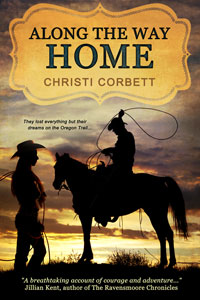 Along the Way Home