So many treasures to take, so much chaos to create. Even love cannot stop her.

After her father pushes her too far, Althyn Laethwyn, who was raised in isolation by her mother on an unnamed island, grows into a dangerous tyrant to be reckoned with. As she travels from island to port to temple and even the watery underworld, her father's slave ever faithful and doting at her side, she discovers her true nature, and what a horrible revelation it is. Love may be her only hope for redemption, but only those who long to be redeemed are offered such a blessing. A truly dark fantasy that delves into the mind of the villainess and follows her journey from innocence to evil. 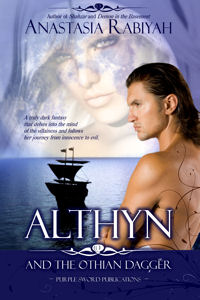 "The Assantra kept many women in her palace, some from all over the lands. They were beautiful, mistress, but…"

She lifted her head to peer down at him. Their gazes locked. She saw the wonder in his blue eyes, the lost look of a man mesmerized. "Say it."

As he stared at her, his mouth slightly ajar, Althyn realized something about herself. Beauty was one thing, but her mermish blood changed what men saw, made her appealing in a way she couldn’t fathom. Suddenly her father’s words, when she’d found him in the jungle standing over her mother’s remains, made sense. She sat up and pushed a braid from her shoulder. "You would do anything for me, wouldn’t you?"

He licked his lower lip with the tip of his pink tongue, his eyes fixed. "Anything you ask."

She stood and walked around her slave. She traced his bare shoulder with her forefinger, marveling at this newfound gift. Certainly, she hadn’t held this strength over her father, but maybe their shared blood negated its power. Her hand slipped up Lainious’s neck and across his tense cheek. She furled her fingers in his thick curls and hummed.

He closed his eyes and leaned his head back in ecstasy. "Your voice," he said, breathless. His shears fell from his grip and onto the wood.

Lured to find out more, she knelt before him and cupped his face with both hands. She sang a light melody her mother had taught her as a child, a sweet, lilting lullaby in a tongue she had no name for…until now.

He is handsome, she mused, thinking that his black hair reminded her of her father. He was more muscular though, not as sinewy or lean, and his skin wasn’t as dark. With the pads of her thumbs, she traced his lips and leaned closer, somehow caught in the spell she wove as she sang. The man remained helpless, his pupils dancing behind closed lids, his increasingly heavy exhales tickling her fingertips. What would it be like to kiss him? To force my mouth over his as my father did to my mother?

She leaned in. Her chest brushed his. He flinched, and she dipped her face so that their lips grazed together.