Gentleman-thief Rafe's latest scheme depends on finding a musically capable partner. He believes himself in luck when he stumbles upon Dora, a beautiful and talented singer. However, Dora is in training to become a nun. How will Rafe manage to convince her to depart on a life of crime with him? 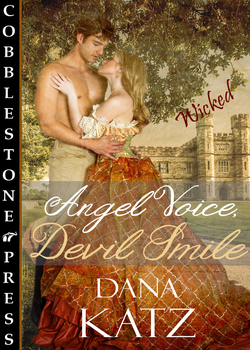 Every single muscle in Rafe’s body hurt, he was half-blind in the bright light, and his head pounded, yet his ears were filled with a song he could only describe as celestial. For a moment he feared his pursuers had caught him the night before, that he’d died and this was the afterlife.

On the other hand, the dead were known to be peaceful folk, and nobody in quite this much pain could be expected to be peaceful, even if they had a more civil temper than Rafe’s. Besides, were he to die, screams of the damned seemed a more likely background than a heavenly choir.

The music came from above. The little beach cave he’d hidden in stood at the foot of a small cliff, and at its top sat a convent. As there was no other dwelling less than an hour’s walk away, he had to assume it was from there the music came. Or song, rather—a single feminine voice, high and clear.

Odd, that. He’d have thought singing would be forbidden in a convent.

The first hint of an idea began to unfurl in his belly, as thrilling as lust and twice as likely to land him in trouble.

The convent had high, forbidding walls and heavy, unwelcoming front gates. Neither of which concerned Rafe, since he came in simply by knocking at the servicemen’s entrance and humbly offering to sell the shirt load of mussels he’d gathered on the beach an hour before.

He entered the kitchen, following a servant who bade him leave the mussels in a bowl on the counter, and heard the very same singing that had lead him here.

“Who is that with the lovely voice?” he enquired of the servant.

“Oh, that would be Dora,” the servant said, shaking her head with a small smile tipping her lips. “She doesn’t realize she’s doing it, poor thing.”

“Poor?” Rafe’s eyebrows rose. “I’d have called anyone with such a voice blessed.”

“As would I. Sadly for Dora, the Abbess disagrees.” The servant clucked her tongue. “It’ll be solitary contemplation for her and no meals, I’ll wager.”

“Really…” Rafe counted himself a fairly fortunate fellow, but this was too much. He made his way back down the cliff slowly, certain that the servant had seen that he was up to no good and that there would be a full contingent of guardsmen waiting to drag him to prison in the little cave at its base.

Guardsmen or no, it was clear that his singer was there as her already familiar, melodious voice rang out to him. The sun on the cliff was making him sweat, turning his firm grip on the pitted rock unsteady. He knew that his dark, tanned skin was visible for miles against the white rock. And yet, for a long moment, he hung there, helpless to do anything but listen.

Then there was a pause in the singing and a small, “Oh, drat,” from below. Rafe resumed his descent.

He had no notion of what Dora would look like. Probably even if she’d looked like a toad, he’d think her beautiful with a voice like that. The figure that awaited him inside the cave, however, was not toad-like in the least.

Dora was short and curvy, with dark hair that shone red when the sun struck it and milk-pale skin. Her eyes seemed dark at first glance, but possibly that was because of the same fear that drove her to stand against the wall of the little cave, clutching—

Rafe blinked. “Is that a fishing rod?”

Her knuckles were white from the strength of her grip. “Don’t come any closer or I’ll figure a way to shove it somewhere unpleasant,” Dora said. Rafe noted that rather than a nun’s black and white, she was clad in simple homespun gray. She hadn’t taken her vows yet.

Against his better judgment, he found himself grinning.

He raised his hands. “Please. Won’t you hear me out?”

Still, she didn’t actively assault him. Rafe had experienced much rougher audiences. “I need your help in a task of utmost importance.” He doubted she realized her grip on the rod loosened. “You alone can determine whether I live or die.”

He’d possibly laid it on a little thick. Her eyebrows arched and her mouth pursed.

“Would I lie to a pious maiden?” Rafe widened his eyes in imploring innocence. “Please, let me closer. I promise your virtue is safe with me.”

To his surprise, she snorted. She dropped the rod entirely, however, and crossed her arms over her chest. “Will you cease your flattery already, and tell me what you want?”

The answer to that, at least, was plain enough. “Your voice.” 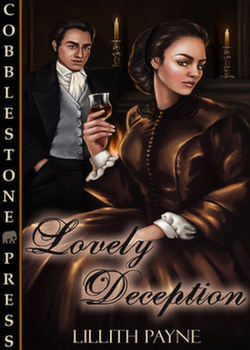