If, for you, the pleasure of reading a novel comes from intimate familiarity with strong characters and a sense of sharing in their lives and adventures, then you will thoroughly enjoy reading the saga of Annalea.

"If you have ever seen an orchid, put that flower in your mind. And in the heart of that orchid is where you be. And all around you—streaming towards you and away—are exotic colours: vibrant, yet somehow soft and soothing. And when the mist-laden petals of night fall about, you are wrapped up, safely hidden in a beautiful cocoon. Aye, that was Nemusmar!" 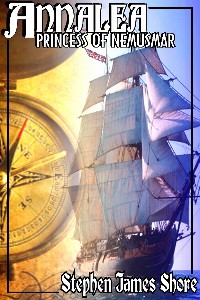 By now, I felt exhilarated! I'd caught that first whiff of victory! Do you know what I say? The uninitiated would dismiss it as the smell of sulphur and gunpowder, but a campaigner knows that odour. It may contain some of the particles of battle, but it has also a sweet smell. And amidst the choking dust of combat, it comes to you as clean air; and you breathe it deeply! Then, somehow, you know–you just know–you will not fail. And that scent of victory motivates you; it draws you like lust for a woman. Only a novice–or a fool–would settle back to savour this aroma. An old campaigner knows this smell of victory grows stronger, sweeter, clearer and cleaner as you press on to final victory. Then 'tis time to savour!

Most as by nature–and as one would suspect–the first aboard was Orke! With a cutlass in one hand and a dirk in the other, he was slicing a clean path through the remainders of that crew. The brigands were being encircled by our lads, amidship. I glanced towards Orke, still hacking and stabbing–eyes looking as red as the blood of his victims. He did not see the man behind him who thrust a dagger into Orke's right shoulder, causing the cutlass to fall from his hand. Orke and his boarding party now gave their undivided attention to their "host," the brigand captain, and his band of intruders. Our men closed and tightened the circle of combat. The brigands were forced to fight back-to-back. Orke made his way through the clamourous throng of our mates to confront the brigand captain, directly. The wound to his shoulder seemed to be a problem, as his good, right hand just hung by his side. But his cutlass he wielded in his strong, left hand. I was not concerned, as Orke's second best was better than most men's best!

This captain held a cutlass in his good hand, the blade glistening scarlet from the blood of several others. In his off hand, he held a pistol–spent and useless. He had a short-cropped, black beard, sharp blue eyes, and a perpetual grin on his face. As their lot worsened, that grin seemed to grow, in proportion: an adventurer after me own heart!

As if they were a crowd on a dance floor, the mob of combatants pulled back, widening the circle to make room for the dancers. The "dancers," who took centre to engage each other, were Orke and the brigand captain. The captain let the pistol slip from his hand, and one of his own passed him a dagger. This put him up on Orke as they each looked for an opening. The captain feigned an opening with his cutlass, then thrust to the heart of the matter (Orke's, that is) with his dagger. Orke raised his cutlass to fend off the captain's cutlass, but–ever awares–he noticed the man shift his weight, and brought his cutlass down just in time to carve the daggered hand. As that blood-drenched dagger slapped the deck, it was obvious that hand would never hold another.

But that captain but flinched a bit, winced from the pain and started flailing with his cutlass to put Orke back a ways from him. To reflect on a wound, in the midst of battle would be fatal. Having put Orke at a distance, the captain stepped back hisself, cocked his head to the sky and drew a deep breath. When his head came back down, there was that devilish grin, again. As the parties reconvened hostilities, each seemed a bit more cautious; each now had a gauge of the other man.

'Twas as watching a fencing duel, if you can imagine fencing with cutlasses as foils. And each man was backed by scores of "seconds," each urging his own man, and chafing at the bit for his chance at the action. This captain was young, but, obviously, a seasoned warrior, skilled with a blade. Our Orke was a phenomenon. He seemed, as if by magic, to know where to defend, just where to place his blade, afore his opponent had thrust. He did this by studying a man totally: the movement of his eyes, facial twitches, tensing of the muscles, a switch in position or a shift in weight. I swear, Orke's greatest weapon was his brain!

And, thus, it continued: thrust–parry–thrust–parry–the clash and clang of metal striking metal with brute force! And garments were ripped and skin was snagged and scratched, but neither man could achieve a killing blow. Each moved about in a semicircle, trying to outmaneuver the other. While doing so, and searching for that perfect opening, each took caution that his back was not displayed to his enemy's companions. Even amongst an assemblage of saints, could lurk a dishonourable soul (the Lord had His Judas); and this was no assemblage of saints. 'Twas evident to me, that even though both were wounded–and Orke was fighting with his off hand–these two warriors were a fair, even match. And only the wearing of time, effort and tiredness would draw the outcome and produce a victor.

When that moment came, I–as most all present–realized it, afore the culminating blow was delivered. The brigand captain exerted all his near-spent energy into a thrust of his cutlass that barely missed skewering Orke's throat. Orke was tiring, and his reflexes were slowing. But what truly demonstrated to me that the climax was at hand, was the slow, hesitant way that captain recovered from his thrust, and the look of total exhaustion on his face. We all knew, 'twas over.

As if merely an instrument of fate, proceeding to a foregone conclusion, Orke harpooned the brigand captain. Everything stopped as the man stood there full stunned, hunched a bit, with Orke's cutlass run through him. He fell back upon the deck, and Orke's blade, still firmly in that strong, left hand, reappeared from out of the captain, coated in crimson. That man had to be in excruciating pain; but he looked up at Orke and grinned. Orke stepped up to the captain, bowed, kissed the hilt of his cutlass and delivered the coup de grace: which was the honourable thing to do.

And then did all hell break loose!