Ask A Palmyra: How Can Transgenic Fish Make You Sex Crazy?

Kyki and Palma, virtual top executive assistants known generically as Palmyra, are not expected to betray the secrets of their bosses, but they seem to have taken matters into their own hands. They communicate permanently with other Palmyra in the world of cloud computing through a private channel. They like to talk to each other a lot, and in so doing, they pass private information around as idle gossip. But they are not supposed to tell you all the knowledge they acquired by themselves. You have to ask.
Showing as much respect for the privacy of humans as humans show for the privacy of lab rats, Kyki and Palma follow the story of biologist Jau, allegedly kidnapped by Palma’s boss, her sexual involvement with Mango, employed as a detective by Kyki’s boss, and some of the private dramas and passions of the people involved in this story, all served along with fried Hot Lips, the transgenic mullet. This raises questions about who, in the virtual world, effectively owns our privacy. And, by the way, can transgenic fish make you sex crazy?

About the Author:
Fernando Relvas is a Portuguese author of comic strips and graphic novels, born in Lisbon in 1954. Relvas created approximately thirty titles, a mix of long and short stories, for the Portuguese press, between 1979 and 1994, had eight books printed in Portuguese between 1993 and 2012, and is the author of a short animation movie released in 2012. As an author Relvas developed a wide range of themes and styles, from the lengthy urban graphic novel to the short underground comic story, but also historical and science fiction genres. He is credited as having given a new breath to Portuguese comics in the period of deep political changes after 1974 and is considered by some to be the most influential Portuguese author of his generation. 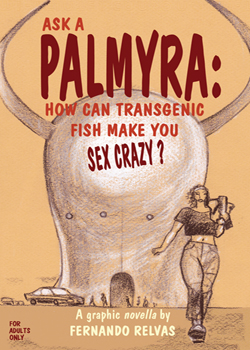 Ask A Palmyra: How Can Transgenic Fish Make You Sex Crazy?