Alain promised to make the evening special for her and she wasn’t disappointed. It’s St Valentine’s Day in Paris and there’s a new game in town.

They were strangers on a train. Was she really going to lift her skirt for him just because he had told her to? Rachel couldn’t remember the last time she had had so much fun.

The sign in the window said “Man Wanted” and he was just what she was looking for. But who was she? She was a different woman every night. There were three of them on the fantasy rollercoaster – who would be the first to jump off?

When Melissa came home to find an intruder in her apartment she took matters into her own hands. She got way more than she bargained for but was still left wanting more. She couldn’t wait for her cat burglar to come back.

He said that he’d never surrender, but when he was on the floor at her feet, with a gun pointing at him what choice did he have? She knew exactly what she wanted and he was in no position to say no. 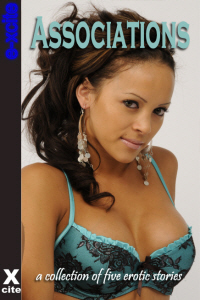 I had come home from work early. It was Saint Valentine’s Day and my lover had promised me a surprise. We were to have dinner at his place. He loved to cook, he had said, but only on special occasions. We both loved to eat. I had bought him a cookbook, Cookbook for Lovers. I was buzzing with excitement as I took the lift up to my sixth-floor apartment off the Boulevard Saint-Michel.
I had met Alain in a small bistro when I first arrived in Paris. The restaurant was packed, but the patron seated me at the last free place at a table for two opposite a quiet-looking man with a head of thick dark blond hair. There was something so unassuming about him that I didn’t feel at all nervous. That only came later.
I ordered steak frites and green salad, the usual bistro fare, and a glass of Côtes du Rhône. He had ordered the same, he said, but with an entrée of six oysters.
‘Do you like oysters?’ he said as the waiter placed a small plate with six open shells before him.
‘I don’t know,’ I said.
‘Would you like to taste one?’
I shook my head and he shrugged.
‘They must be very fresh,’ he said as he squeezed a few drops from a quarter lemon onto one of the plump pieces of flesh in its mother of pearl shell. The flesh trembled slightly as the juice touched it. Then he lifted the shell and slid the oyster into his mouth. Mesmerized by the look on his face, a moment of pure delight, I couldn’t help imagining his tongue playing with this fruit of the sea before letting it slide down his throat.
‘Are you sure you wouldn’t like to try one?’
I shook my head. My cheeks felt hot and it was with a sense of relief that I placed my napkin on my lap when the waiter arrived with my steak.
After three weeks in Paris, I had grown more than accustomed to the rare tender meat that released a gentle trail of juice when my knife cut the flesh. I loved it. The act of eating calmed me and our conversation settled comfortably into a getting to know you.
We met again in the bistro. One evening we left together and he took me to his flat on the Boulevard Saint-Germain. It was a simple studio, a one-room flat, with a large mattress-like divan on the honey parquet. A cluster of barley-coloured broad candles squatted in a corner by the window through which the lights of the city twinkled. Soft classical music was playing. His seduction of me was gentle and knowing, his caresses building a haven of trust, and so I fell in love with Alain.