Destry Forrester is at the mercy of Trent Sheen’s voice, otherwise known as DJ Zeus, God of Radio. When he speaks, her body reacts. More than once she has gotten off to his sexy bravado. On a dare, she goes to the radio station in nothing but a trench coat, and flashes him.

Trent Sheen gets one heck of a surprise on his birthday when a beautiful woman shows up unannounced, and arouses more than his interest. By chance they meet again and give in to their heated desires. Unfortunately, those desires are broadcasted on air for everyone to hear... 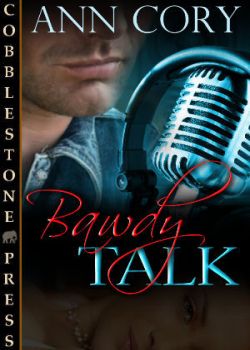 Destry Forrester tossed her purse on the passenger seat and did her best to discreetly slip into the car without flashing her naughty bits to the public. No one needed to know she wore red lace panties. Unless a certain radio personality were to pass by, and then she’d happily flash her matching bra, too.

Inside the car, she closed the door and turned the key, starting up the radio at the same time. The dial was set to her favorite station that, for the most part, didn’t play good music, but had a disc jockey she couldn’t get enough of. Specifically, his voice. More than once she’d pulled off the road, away from prying eyes, and gotten herself off to his sexy cadence.

Discreetness in mind, she’d picked up a tiny vibrator that easily slipped between her thighs. Set on high, the little battery-operated device worked wonders while she fantasized about his cock spreading her wide apart, giving it to her hard. Almost like an On/Off switch, his voice controlled her, making her so wet she kept extra pairs of panties hidden in her glove box.
As she backed halfway out of her parking space, a mildly annoying thrash metal song ended and Trent Sheen came on the air. DJ Zeus, he called himself. At the sound of his voice, her stomach blazed with an inner heat, and it spread throughout her body. Her nipples pressed tight against her bra, aching for the owner of the voice to flick his tongue against them.

While he announced the upcoming week’s forecast, she imagined herself bent over his knee, wearing a micro miniskirt, begging to be spanked.

While Zeus was on the air, she couldn’t help but be distracted, her mind escaping into a euphoric oblivion. With a groan, she drove forward into her parking space and let the hurried driver by before pulling back out. Personal indulgence would have to wait. Her hand trembled as she turned up the volume, the DJ’s sultry voice coming through crystal clear and in surround sound.

“This is DJ Zeus stepping out for a quick lunch at Mount Olympus while my good buddy, Vince Meat, entertains you with 80’s Flashback Fever.”
Destry did a silent cheer, complete with make-believe confetti and a pompom swish. Much to the chagrin of friends and co-workers, she adored 80’s music and whole-heartedly sang along from the comfort of her car, amazed at how many songs she knew by heart.

In sixth grade, she and her friends boldly dressed up as Duran Duran for a school talent show, lip synching to “The Reflex” as she portrayed the insanely sexy John Taylor, complete with big hair and a fedora.

Traffic didn’t look too bad as she exited the parking structure. Downtown Portland, Oregon had a reputation for ongoing construction down one street or another, creating chaos. Fortunately, her destination was construction free, and only five minutes away. Time enough to jam out to Whitesnake.

After the next set of lights, she made a right turn and parked in front of Tangy Sangy. While DJ Zeus ate his lunch, so did she, though never at the same place. Glancing up at the sky, she noted a patch of gray clouds nearing, and grabbed her umbrella just in case. She snatched up her purse and double-checked she had her keys. Mouth-watering aromas of gourmet burgers and specialty meats filled the air as she stepped out of the car, locked it, and hip-checked her door closed.

Inside the cozy delicatessen, the delicious smells continued to taunt her as her eyes adjusted to the soft amber lighting from the wall sconces. Bubbly honey-blonde Brenda waved from a table toward the back, her nylon black legs peeking out as she scrambled to her feet. Destry waved with her umbrella and strode over to her best friend. At the table, they quietly squealed and hugged as if it had been ages since seeing one another.

“I ordered your usual. Hope you don’t mind.”

Destry slid into the other side of the booth and plopped her purse and umbrella down. “Not at all, thanks. I would’ve been here on time, except…”

Brenda held up her hand adorned with silver rings on each finger. “Don’t tell me, I know, DJ Zeus.”

Her friend’s eyes sparkled as she beamed. “I swear that man has cast a spell over you.”