When Wade Williams meets Alexis Broderick, sparks fly…in more ways than one. Can they overcome their suspicious natures in time? Or will past hurts and disappointments forever keep them apart? 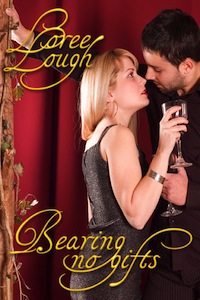 Luke never finished his sentence, because he passed out.

"This your boy?" the doctor asked, packing up his bag.

"No…" What definition should he give his relationship with Alexis? "He's my girlfriend's son."

The wail of a siren punctuated his statement. "Finally!" Wade ground out. He'd assisted the EMTs and firefighters at nearly a hundred emergencies, and without exception, he'd been as patient and reassuring as he knew how to be. But Wade had never been on this end of an accident before. Now that he understood how painfully frightening it was to wait for help to arrive, he'd be even more understanding in the future.

Two uniformed EMTs leaped from the vehicle, life saving gear in tow. "Hey," said the one with Martin on his nameplate, "you look familiar."

Wade nodded. "You were my instructor in the Basic Life Support class I took a couple years back."

Nodding, Martin gave Luke a quick onceover, then strapped the blood pressure cuff around the boy's arm. "He's stable," Martin told his partner. "But let's get him out of here. Head injuries can be tricky business." Together, the EMTs eased Luke onto a gurney and into the waiting ambulance.

"Where do you think you're goin'?" Martin asked as Wade climbed in behind them.

Reaching into a box near the door, Wade snapped on a pair of rubber gloves. Then, from the I.V. bar above his head, he removed one of the three-inch lengths of surgical tape placed there by the guys on the previous shift. "I know the boy," he said, holding the tape out to Martin. "We haven't been able to get in touch with his mother yet."

Martin nodded as he inserted an I.V. into Luke's arm. "Yeah," he said, hanging the glucose from the bar above, "guess it'll be better if there's a familiar face nearby when he comes to." Grabbing the tape stuck to Wade's thumb, he used it to secure clear plastic tubing to the boy's wrist. Martin signaled his driver with one hand, then depressed the transmit button of his two-way radio with the other.

Wade listened as Martin rattled off the vital statistics…blood pressure, pulse, basic inventory of Luke's condition…to a doctor at the other end. Wade hadn't worked on this particular ambulance before, and because he knew each crew set things up inside to meet their own self-specified requirements, he took a quick look around. Not that knowing where things were would do him any good. As a volunteer, he'd been trained to assist, and nothing more. He wished he'd gone whole hog, studied to become a full-fledged EMT instead of taking the Basics Course. But he hadn't, and frustrating as that was right now, Wade had no intention of complaining. Because these guys didn't have to let him ride along, and he knew it.

"So what's your take on this?" Martin wanted to know as the vehicle sped toward Howard County General.

"Witnesses said an elderly lady drove through the intersection…didn't see Luke." Shrugging helplessly, he added, "It appears he didn't see her, either."

Martin nodded. "You want to call his mother, have her meet us at the emergency room?"

Call Alexis? It was the first time Wade had given a thought to his truck, still sitting in the line of traffic, driver's door open, keys in the ignition. "I have a car phone," he grumbled, "on the front seat of my pickup." Scowling, he shook his head. "Fat lot of good it's doing me there."

Nodding in acknowledgement, Martin barked more information about Luke's condition into the radio.

Phone in hand and forefinger poised to begin dialing, Wade froze, gaze glued to the keypad. What would he say when she answered? He punched the on button, and when it beeped, Wade met Martin's blue eyes. "What do I tell her about his condition?"

"Ain't much to tell…yet. He's got a head injury, but we won't know how serious it is 'til we get him into x-ray."

"Nobody home." He'd been around the Broderick house enough to guess what had probably happened. Impatience had likely driven Luke to distraction, and distraction had driven him to the garage to fetch his bike. He could almost hear the boy saying "It's only a few blocks to Wade's house, Mom. I'm not a baby. I'll be fine."

He patted Luke's hand. "You will be fine, son, if I have anything to say about it." Lord, he added silently, don't let anything happen to him. Alexis had told him she'd lost her uncle during the Viet Nam war, that her dad had died shortly afterward. Derek's accident took him from her before their seventh anniversary. She'd had to sell her house to get on top of the bills he'd left unpaid. There ought to be a law, just one tragedy per lifetime.

Because how many disappointments and losses could one woman bear--even a strong woman, like Alexis--before the weight of them broke her?