In the ancient, Celtic land of Cornwall, Emma Hayward searched
for a myth and found truth.

Needing to prove she's got what it takes in the male-dominated world of wildlife photography, Emma sets herself an impossible taskto be the one to capture the fabled Beast of Bodmin Moor on film. It's her big adventure and nothingnot even the handsome and charismatic, motorcycle designer, Seth Trevelyanwill distract her and stop her from reaching her goals.

But a man wearing black leathers can mess with a girl's mind, no matter how big her plans. 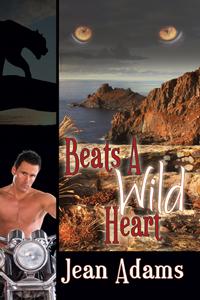 "This was a terrific book! The author writes well, and Beats a Wild Heart is not the typical romance genre novel. The multilayered story was rich, well crafted, and heart warming. Let me say straight out, I loved this book."

~ Robin Peek
~~~
"Jean Adams has written a wonderful, romantic tale that is sure to please. This is a good book for those who want to escape to the mystic, mythic moors and all the mystery that keeps them alive for the dreamer in us all."

- Word Museum
~~~
"This wonderfully sweet romance had just a hint of mystery that made me want to finish in a hurry. Highly recommend this one."

~ Kathy Boswell, Romantic Times
~~~
"Fans of the legends about King Arthur will especially adore this story. Excellent tale that I highly recommend!"

~ Detra Fitch, Huntress Reviews
~~~
"Mystery, secrets and intrigue are carefully woven throughout the book, to hold your attention to the satisfying end. Not a typical romance, but alive with the mystery of the mystic and daunting moors, which seem sometimes to have a life of their own."

~ Pam, Love Romances
~~~
The legend of the black cat of Bodmin Moor is a well known Cornish legend. Ms Adams has merged the essence of myth and romance into a fascinating story which catches the imagination. I enjoyed the way the story unfolded at a smooth and steady pace with Emma and Seth appearing as real people who feel an instant attraction for one another. At first the story appears to be a straightforward, but as it evolves mystery, love and intrigue intervene to make a vibrant story with hidden depths. Beats a Wild Heartis well written and a pleasure to read, but you should only start reading if you have time to indulge yourself. Once you start reading you won't be able to put this book down.

~Orchid, The Long and Short Reviews

In the utter silence of the moorland night, another sound caught her attention; the very familiar sound of Seth's voice. Since no others came back in reply, she deduced he must be talking on his mobile phone. She couldn't hear the words but it sounded soft, coaxing. Almost like a lover.

By the time Emma reached the window Seth had stopped talking . . .

Then she saw it. Sleek and black, its coat bore an eerie silvery sheen in the moonlight . . .

Of course! The sawing sound was one of the noises leopards made.

It was so beautiful she wanted to cry. All muscle and sinew, it was terrifying in its raw power. Blinking rapidly, Emma cleared the lump in her throat and gave the creature a watery smile. Then the animal slipped into the shadows and was gone, back on to the moor . . .

Seth was down there! Shaking her head, Emma tried to clear the gathering fog. Hadn't he seen the leopard? If he had, all hell would have broken loose. The animal was probably looking for food.

What if they had come face to face? It could have attacked him and she would be useless to help him on these crutches, a leg that wouldn't support her and a mind muddled by drugs.

Although barely able to stay awake, Emma forced herself to scan the shadows one more time, hoping for another glimpse of the panther, but she knew it had gone. A sudden shiver made her realize how low the temperature had dropped. She closed the window and made her way cautiously back into bed.

Just before sleep claimed her, Emma smiled into the darkness. What she'd seen tonight was no figment of an overactive imagination. Even though the pills had worked quickly, her drugged brain knew one truth.

Tonight, she had seen the Beast of Bodmin Moor.