Begging Will Get You Nowhere

She'll make you beg, but in the end it won't matter. Ike always gets her way.

This was it, their last shot. Ike knew if Thomas and she, didn't find the kids, they could lose them forever. On a reliable tip they head south. But when a phone call changes everything they are sent north instead. An old friend has a lead that just might be Ike's salvation, only they'll have to go, undercover.

With the moment upon them, its down to Hannah, and the team to catch the suspect and rescue the kids.

Or are they already too late? 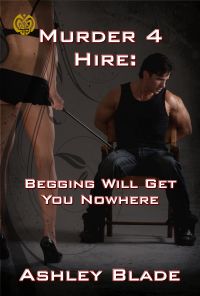 Begging Will Get You Nowhere

Ike threw the last of the suitcases into the bed of the brand new pickup truck. Thomas waited on the porch, the last gun bag in his hand. This is it, Ike. All you’ve got to do is find the place in the pictures, and get the kids back.

Only a few days ago she stood in the same place, heading toward south Alabama, helping Ares rescue his own son from Persephone. She had a penchant for young attractive men, and Ares’ son fit the bill. Of course that’s now how it was supposed to go down. Ares offered to help free Persephone from the Underworld. After taking him up on the offer, she paid him back the best way she knew how; kidnap his son. Needless to say, when Ares found out, he flipped his shit. Not that it was hard to do, the man was the God of War.

Ornery to the tee, Ares road into her life like a cyclone and turned it upside down. Ike found his son at a casino in Shorter, Alabama where he was held captive by Persephone. She’d had grand plans of never returning with Hades to the Underworld.

Once father and son were reunited, Ares left Ike with a parting gift—a set of pictures and a location. South America. Walking toward her future husband, Ike’s phone chimed. Pulling her cell out, Ike read the text. She sighed and shook her head. Hannah needed her.

Hannah was her best friend and the daughter she always wanted. Ike rescued her from an orphanage in Scotland when she was fifteen. With no family or any place to go, Ike brought her home with her. Not that it was smooth sailing or anything, far from it.

There were times Ike just wanted to pull her hair out in frustration. A smart ass like herself, Hannah had tested Ike’s resolve at every turn. Her heart was in the right place, Ike knew it, and over time she’d carved out a place in Ike’s heart forever.

Typing back a quick answer with a huff, she hit send. “Of all the times to be a freaking girl.” Ike growled, stomping up the stairs to Thomas. “Hannah’s on her way.” Yanking the bag out of his hand, she mumbled under her breath.

“I love you too, Ike. God, I can’t wait to spend the rest of my life with you.” Thomas, ex-FBI agent and Ike’s fiancé, chuckled playfully as he followed behind her. Just over six months ago, Ike rescued his butt from Nicolai…again, and they’d teamed up to find his children.

“Shut it, you. I am in no mood.” Ike threw the last bag into the truck and spun around. “Of all the times the girl could pick to break it off with her FBI geek, it’d be right now. Now!” She let out a growl as she raised her hands in frustration.

“I don’t see the problem, Ike. She obviously wasn’t happy or she’d still be with the geek.” Thomas rubbed her shoulders trying to sooth her frayed nerves.

“She’ll be a crying mess. She’ll—she’ll be a girl.” Ike shrugged off Thomas’s arms and paced. In the text message Hannah said that she was only fifteen minutes away. She would explain everything when she got home. Ike couldn’t wait.

“You don’t know that for sure. Just calm down, I am sure there is a rational explanation for all of this,” Thomas said, hugging her to his side. In the distance, Ike could hear Hannah’s motorcycle roar down the dirt driveway and she nodded.

“Hey guys. Are we ready to go?” Hannah slipped her backpack off and hung her helmet from the handlebars. The ease in which she asked the question confounded Ike. Where were the tears? The anger? The hurt? It was as if Hannah had completely turned off her emotions.

Ike walked over to her and checked her face. She was looking for smudged mascara, red swollen eyes, and any signs of crying. Finding none, Ike brows furrowed. “Spill, Hannah, I don’t have all day for this.”

Shoving Ike’s hands away, Hannah tsked her. “It’s like I said in the text. I broke up with Simon.” Pushing past her, Hannah ran to Thomas and hugged him. “Hey, stud muffin, how’s Ike treating you?”

Ike gaped as she watched Hannah act as if nothing was wrong. Sighing, Ike walked over to the truck where they waited. “Let’s go. We’re burning day light.”

Freeway sign after freeway sign passed by, and still Hannah didn’t say why she'd broke up with Simon. Ike had a strangle hold on the wheel as she counted to ten.

This was her first real boyfriend. The guy she'd lost her virginity to. How could Hannah possibly be so nonchalant about breaking up? And how was Ike supposed to comfort and console her like Ike so desperately yearned for as a child if she didn’t talk?

Damn it, Hannah might not be flesh and blood, but she was every bit Ike’s daughter. If Ike knew anything at all about love and relationships, she knew that she would have bawled for days if anything happened to Thomas.

Opening her mouth to speak, Thomas beat her to the punch. “You seem to be taking the whole break up thing in stride, kiddo.”

Hannah chuckled, making Ike smile. The first time she heard Hannah laugh was the best day of her life. To know that a child beat as badly as Hannah had been could laugh, thrilled her. “I got bored. Honestly, good looks only go so far. The rest of him fell short. I wanted to go out, have fun. He wanted to stay home, work on computers and play online games. He was into role play. Kinky right?”

Ike and Thomas nodded in affirmation.

“Well, it wasn’t kinky at all. His idea of role play was sitting behind his computer and playing a fictional character in a pretend game.”

“Like Dragons and Warlocks?” Thomas popped off, causing Ike to give him the squinty eye.

“I don’t even want to know,” Ike said when Thomas tried to explain.

“Anyway…” Hannah snorted. “I asked him to role play with me, and he scoffed. He told me that I couldn’t possibly understand the worlds they build. The people they play. I said I knew how to play doctor. The mother fucker had the nerve to laugh. So I left his ass.”

Glancing up in the mirror, Ike saw Hannah glancing out the window, staring into nothing. Like fuck she is over this. The first break up is always the hardest. Poor kid. Ike shook her head as they crossed the state line into Mississippi. Everything Hannah was feeling, Ike had felt when she left Justin for the first time.

The sun began to set as they pulled off the road and stopped for the night. So, it wasn’t a brilliant idea. Them driving all the way to South America, but their options were limited. This one was their best bet and the most logistically sound. You couldn’t get kids passports without the kids, and Ike needed her equipment. By her estimates it would take about four days to get where they needed to be. Their informant Juan would meet them in a small cantina on the outside of Quito, Ecuador.

Wasn’t it Ike’s luck, she would return to the one place she vowed never to step foot in? Yep, I am officially a glutton for punishment. Handing Hannah her own key, Ike and Thomas went on to their own hotel room.

“Do you think we should leave her alone tonight? I’ve a feeling she is hurting and doesn’t want to say anything.” Thomas sat down the bags and stared at Ike.

“I was just going to ask you that very same thing.” Ike wrapped her arms around the man of her dreams and kissed him softly.

His tender eyes filled with warmth. “Great minds,” he said, kissing her temple.

Ike breathed him in, squeezing his waist. “Yes, we do babe. I’ll call her and the clerk while you grab us a pizza and some beer. Deal?”

“Fair enough.” Kissing her quickly, he grabbed the keys and headed out, leaving Ike to handle 'Hannah Duty'.

Sitting on the edge of the bed, Ike pulled out her phone and called her best friend. As she was about to hit send, her phone rang. The number for her contact blinked on the screen and she held her breath. After the third ring, she exhaled and answered. “Hello?”

“What’s up, Juan?” It wasn’t like her contact to call her without being prompted. He was quick and worked hard for her. Ever since Ike set out on her own, he was the one person besides Hannah and Thomas that she could count on to get a job done. So, why is he calling me now? The plan was to make contact once she hit Panama, and not a day sooner. This phone call could seriously fuck up their mission.

“We’s got a problem. I dunno what happened, but our suspect is gone. He vanish.” She could tell he was nervous. His accent was always thicker and his English got worse.

“Juan, I want you to take a deep breath. Explain to me what happened slowly.” She sat against the headboard, blocking out everything around her.

“We went out to check the property this morning, but he was gone. Henry said the man left last night. The kids never were in the house Miss Ike. It was a fake out.” He sighed, defeat lacing his words.