After a few failed attempts at writing sex, Mike suggested to his wife they try out the scenes, purely for research, of course. Mike gets more sex than he has in a long time, with Jen coming up with loads of new moves to make her novel a bestseller.

Frances is convinced by her friend, Annie, to join the local cycling club. It’s a good way to lose a few pounds but, more importantly, there are some tasty guys there. Peter – a very experienced cyclist – offers a private ride with Frances for the following morning. After a few miles riding, they come to a secluded spot where Frances can really get to grips with riding.

He Fucked/She Fucked by Landon Dixon

In an attempt to show his long term girlfriend, Megan, how he wants to spice up their sex life, he puts on a down and dirty show, inviting Megan along. Days later, the table turns as Megan picks up a colleague of his, and shows him that their sex life is a two way street.

While camping on the beach with her boyfriend, Brad, Mary decides to go take a quick shower. She overhears a couple having a little fun in the next cubicle and Mary becomes a voyeur and has a little fun of her own. When she gets invited in, Mary has the time of her life...which gets even better when Brad joins the party.

Taking a detour to avoid the horrific traffic, Sam comes head to head with a white van which refuses to budge. Sam decides not to back down and engages in a battle of wills. Just as she wins, the van won’t start. Getting out her car to help fix the problem, things get a little heated when the game of one-upmanship continues. 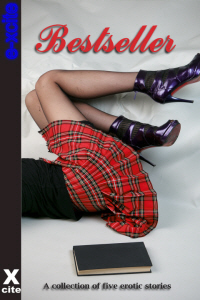 Acutely aware of the rapid swelling of his dick, tight jeans hugging his throbbing bulge, Mike’s excitement soared.
Jen’s get-up was better than the last time, he noted. Very imaginative, as with a slow smile he swept his gaze over his curvy little wife. She was wearing black jackboots, those alone sufficient to stir a man to the heights of ecstasy. A silver thong that covered not a thing, and small red circles balanced on her nipples. And a bright red smile.
“Je-sus!” If only she had started her erotic writings years ago during all those relatively lean years. Those times their lovemaking had become routine, and he’d been every bit as bored as Jen appeared to be, but now – now, she had a ferocious appetite. And he had that babe Jackie Collins to thank.
“Where’s the whip?” Mike joked, dying to jump out of his jeans and get on with it.
For a moment, Jen’s smile slipped. “I don’t resort to such crude props in my scenes, Mike,” she rebuked him.
Oh, yeah? What do you call those boots? But he wasn’t about to argue. Far more important things on his mind.
Before he had time to remove his shirt, Jen was bearing down on him. Her feathery touch slid along his arms and he shivered. Being a shorty, she got on tippy-toes to place her luscious wet mouth on his. As her tongue slipped decisively between his lips, he nearly came in his pants. Crikey! None of that, mate. He wanted to bury himself inside his wife’s lovely snatch before he let loose. Having to wait was getting a helluva lot more difficult as her tongue slid in and out of his mouth. He inhaled a spicy mix of cinnamon and fresh nutmeg, her legacy from tonight’s dinner, he assumed, as Jen drew away.
With a smirk she popped the remaining shirt buttons, placed a fingertip on the rapid pulse at his throat. Tossed him a smile like the temptress she was. Then she bent her head and licked away the film of sweat that was already coating his skin. He tensed; trembled again when she placed her hot little palms over the nipples hiding in his chest hair. When she pressed her thumbs against the pebble-hard disks, he jerked back, sucking in his breath, and prayed that she would hurry up and get to the main course.
His wife stilled, adopted a look of fierce concentration, which was disconcertingly clinical. Mike growled and grabbed her hand, guiding it lower down his body.
“Mike! You’re breaking my concentration. I’m trying to write a book here.”
“I call it torturing your husband.” As he caught the smile that twitched and radiated from her eyes, he blustered, “Hey – nothing too weird, mind!”
“Would I do that to you, sweetie?” Jen purred. “But it’s given me the most marvellous idea. All we need do is play it out. See if it works.”
Sinking onto the carpet, Jen dragged her man along with her. Her tongue zinged with the taste of ale from Mike’s mouth. As Mike stretched out alongside her, she took hold of his zip, sliding it open, then tugged at his jeans. Slowly, seductively, down, purring like a contented kitten.
“My, what a big boy you are,” Jen said huskily, as she released his erection from his briefs. She snatched a cheeky kiss on the tip of his cock, then jumped to her feet. “Be back in a minute.”