Big and Beautiful - A collection of Rubenesque erotica

Eleanor really needs to make a good impression at her job interview, but a mishap at the dry cleaner has left her wearing a suit which is far too tight. It shows off every detail of her voluptuous body, much to the delight of Ryan, who's conducting the interview. He adores curvy figures, and he also knows the best thing to do with a gorgeously big bottom is… spank it!...

The Cherry Picker by Alcamia Payne:

Antonio, has his eye on unctuous Sofia - a cherry picking country girl, who’s as sexy as the cherries she picks, and who has expert cherry picking hands. However, Sofia is a naughty girl and she plays with her own cherry much more than the cherries she occasionally steals from her basket. As the curvaceous and naughty Sofia, leads Antonio on an erotic game through the orchard, Antonio’s determined to pluck Sofia’s personal cherry. But, little does he know that Sofia has an agenda all of her own, and she wants to pluck the cherry from his stem too... Naked Rain by Victoria Blisse: It's a rare, hot British summer and when the rain comes curvy Sandra runs out into the garden and gives in to temptation. As she enjoys the caress of the cold raindrops on her hot skin she realises her sexy, younger neighbour is enjoying the same thing and is as naked as herself. Will either of them run and hide or will they come together to enjoy the Naked Rain?

Careful what you wish for indeed! Bessie gets her way with showing off more of her magnificent chest than she usually dares as Freddy escorts her round the Medieval role-play convention, as nervous and aroused as she is. The best friends act on a dormant lust, possibly making them closer than they ever dare, all because Bessie likes to show off her round body and Freddy likes looking at it... 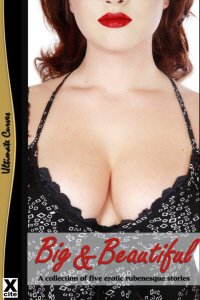 Big and Beautiful - A collection of Rubenesque erotica

I blame the dry cleaner. Though maybe a little of it was my fault. After all, I should have braved the rain and gone to the cleaner I’d been using for years, rather than simply dashing to the one in the precinct by the tube station because I didn’t fancy getting wet.
The fact the bored-looking bloke behind the counter only flicked one of his iPod headphones out of his ears before acknowledging my presence should have given me the clue he wasn’t paying too much attention when I asked him to take good care of my suit. Even so, he did promise it would be ready for me to pick up by five, as I’d requested.
I needed the suit cleaning because I had a job interview the following morning, and I needed to do well at the interview because I’d been out of work for five months and was starting to feel the pinch financially. At the age of 40, I suspected I was too old and too over-qualified for the position, but this was the first interview I’d been called to attend after sending out more applications than I could count, and I was determined to do whatever it took to create a good impression.
The suit was indeed ready when I called for it just after five o’clock, sheathed in protective plastic and still retaining a faint smell of the chemicals which had been used to clean it. That, I knew, would have faded by the morning. Teamed with a crisp white blouse and shiny patent heels, the smart pinstripe suit would make me look efficient, reliable and eminently employable.
At least, that was the plan. Despite all my intentions to be professional and give myself plenty of time to have a filling breakfast and make my way to the offices of Simms and Simms, my alarm clock failed to go off and I overslept. I hastily gulped down a glass of orange juice and a bowl of cereal, then went to dress. Which was when I realised something had gone wrong with the cleaning process. My beautiful wool suit had shrunk. Not enough to be unwearable, but it was certainly a whole lot tighter than when I’d tried it on in front of the bedroom mirror the day before.
I should have found something else to wear, but my other work suits were in storage in the attic, and I didn’t have time to go hunting for one. Already, I was running the risk of being late for the interview. I would have to go as I was.
Now, I’m a big girl. Not fat, although I would be if I didn’t exercise as frequently as I do, but voluptuous. My breasts are huge, creamy mounds that beg to spill out of a man’s hands, my thighs are full and fleshy and my bottom is round and delightfully dimpled. It’s the figure of a 40s pin-up girl, designed for the bedroom rather than the catwalk, and I’ve had more than my share of lovers who could have happily spent the rest of their lives buried in my generous curves.
Looking at myself, watching the way the buttons on my jacket strained across my chest to the point of bursting, I knew this wasn’t exactly the way I’d hoped to present myself to a prospective employer. The jacket wasn’t too much of a problem, once I’d left all but one of the buttons unfastened. The skirt was a different matter. It had been on the tight side when I bought it, as was the current fashion, but now it stretched taut as a drum-skin across my backside. It clung to the gentle swell of my stomach, gave me a wiggle when I walked and made me look – available, somehow, as though I was seeking to be judged on something other than the information listed on my CV.
That was certainly the feeling I got when I walked into the reception area of Simms and Simms’ impressive, glass-fronted offices. The girl sitting at the front desk – all frosted-blonde highlights and razor cheekbones – glanced at me as though offended by the way my curves were squeezed into the skin-tight skirt. Mind you, she looked like the sort who exists on edamame beans and fresh air and believes weighing more than eight stone is an affront to the concept of femininity. Not that it was her I had to impress. My appointment was with a Mr Stockwell, the company’s senior marketing manager. With a final disapproving sniff, the receptionist told me to take the list to the fourth floor and wait outside Stockwell’s office until I was called.
There appeared to be another prospective employee in the office as I approached, so I made myself as comfortable as I could on the hard grey plastic chair in the corridor outside and took the opportunity to touch up my lipstick. Less than three minutes passed before the office door opened and a twenty-something brunette in an immaculate black coat dress emerged. I was trying to gauge from her expression how well she felt the interview had gone, and whether she was in with a chance of landing the job when I heard a deep voice say, ‘Eleanor Thornton? Come inside, please.’