Blame It On The Champagne

Blame it on the Champagne – Gwen Masters

She didn’t fall for him – she fell on him – literally. They were both wet from the champagne that she’d tossed over them but by the time they’d finished in the Ladies Room they’d both be a lot wetter.

It wasn’t like Mark to be late. He enjoyed the sessions in the hotel room with Alexa as much as she did. They forgot about their every day lives inside the hotel room. What happened in there was separate from the real world. It was all about the sex.

Playing to the Camera – Stephen Albrow

She knew that Big brother was watching and she was determined to give him something to watch. Out there on the High Street with the CCTV trained on her she performed for the camera and the guy that would be watching it. If she was lucky, she might even get the reaction she wanted.

The hotel’s open bottle policy said that Dave’s waitress had to escort him and his half drunk bottle of wine to the lift, but she didn’t stop until they were the other side of his bedroom door. But there would be no extra payment for this room service.

Sarah went along on the cruise in the hope of a good time but she was disappointed. However, when then yacht is boarded by pirates that all changes. Jolly Roger took on a whole new meaning. 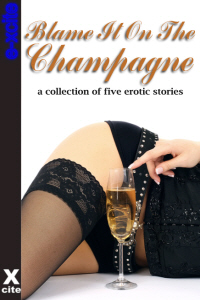 Blame It On The Champagne

I blame it all on the champagne.
Or maybe I should blame the high heels. I wasn’t accustomed to them, after all. I don’t go to things like that awards show every day. I’m a quiet, simple kind of girl. I don’t go for the glamour and flash and glitz of the celebrity thing. How I found myself smiling for a camera and signing autographs is usually a bit beyond my realm of comprehension. I just write the songs.
And last night, I spilled champagne on Mitch.
Actually, it wasn’t just spilling champagne. It was running into him out on the carpet (not the red one, silly, the green one – it was the after-party-party, you know) and then landing in his lap. Well, almost. He wasn’t sitting down when I ran into him. But by the time I was done with him, we were both on the floor.
Later we were on the counter. But we’ll get to that in a minute.
So there I was, dressed to the nines and my date was nowhere to be found. Alan wasn’t a date in the first place, not really. He was more of an escort, a guy from a record label who just happened to need a cutie on his arm and I was a cutie who just happened to need an arm. Perfect. I didn’t even know his last name.
The show was over and I had a choice: go home and go to bed or go to the after party and hope that I met someone to go to bed with. I’m not one of those prudes who think that emotion has to accompany the sex. Hell, no. Give me a good-looking stud and a few shots of choice alcohol and I’m bound to do damn near anything. Then I might write a song about it. Fucking doesn’t pay the bills, but it does make for good inspiration.

So that’s how I wound up in the middle of the party with a glass of champagne in one hand and the other fiddling with my little clutch purse. I was talking to some up-and-coming artist with an independent label, one of those whose dreams are bigger than any bank account could ever help satisfy. He was getting around to asking me if I would write a song for him. He wasn’t interested in anything more than that, and that certainly wasn’t what I was looking for. The evening wasn’t all about business, was it?
I drank my champagne and smiled and said that I would come up with something. His manager could get with my publisher and they could talk it over. He smiled and immediately started looking for other people to talk to, anyone who might be willing to talk business and give him that oh-so-important step up the music industry ladder.
I downed the glass and when the waiter came around, I plucked another from the tray.