Stephanie Dubois has managed to keep her true nature a secret. Her innocent involvement in a bounty hunt mission brings a vampire crimes agent to her door. The last thing she needs is someone poking around in her business. Soon, she realizes that being charged with obstructing justice is the least of her worries. This rugged vampire seems determined to reveal the secret that could tear her family apart.

Dex Mason is relieved to have finally found Stephanie Dubois. She is the only person who might be able to save his brother’s life. Yet she vehemently denies her genetic makeup and the rare gene she carries. This is an unexpected obstacle. He has no choice but to use the only leverage he has. 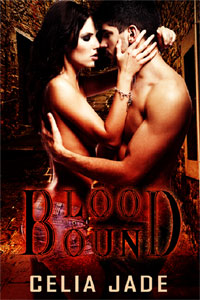 In the kitchen, they helped themselves to pie, ice cream, and coffee. Slowly, Amanda, Brendan and Mom drifted toward the living room, leaving Stephanie alone with her brothers. Patrick was already cutting a second slice of pie while she poured milk into her coffee.

“So, Stephanie, you still working at that ad company?” he asked.

“It’s a package design company.” She’d said so half a dozen times before. “And I’ve been there four years now.”

Patrick raised an eyebrow as if it were the first time he’d heard this, and then dug into the pie.

Kyle’s mobile trilled. He put his plate down and pulled the device from the back pocket of his jeans. “Kyle here.” After a few seconds he snapped his fingers to get Patrick’s attention and gestured for him to jot down notes.

“K, hold on a sec.” He pulled the mobile away from his ear and said to Patrick, “2900 S. Lafayette. South of East Yale Avenue.” To the person on the phone he said, “We’re not home, so we have to get the dogs. It’ll take us about an hour to get there.”

After a pause, he added, “Oh yeah? That’s interesting.” He chuckled as he ended the call.

She’d planned on making a quick exit, but a feeling of apprehension stilled her.

“Jay tracked Eric Polasky to that address and the place got a large take out delivery, so he’s gonna be there a little while.”

Patrick acknowledged this with a pleased grunt and tucked the sticky note in his shirt pocket.

“What’s the offense?” Stephanie asked, still unsure why she was curious.

Kyle gave her a wary look and replied after a moment. “Jumping bail on a blood party charge.”

Blood parties were illegal. They involved vampires feeding directly from a willing human or a dhampir—a person who was part human, part vampire. Although participants generally exercised caution, there were cases where people had ended up in hospital or dead.

“Has he killed anyone?” she asked.

Her brother scowled. “No, he’s just bloodsucking vermin, like the rest of them.”

Stephanie ignored the racist slur because the case had grabbed her attention.

Kyle turned to Patrick. “Remember that little vampire punk, Kelso, who gave you lip when we questioned him about Simons?”

Her senses snapped into alertness at the mention of Kelso.

“Sure do,” Patrick replied.

A cold knot clenched her stomach. “Do you mean Jason Kelso, the dhampir?” she questioned automatically.

“Some dhampirs are just as bad as vampires,” Kyle retorted as his eyes narrowed. “What do you know about Kelso?”

The knot tightened painfully and she felt angry heat pool in her face. Now was not the time to get into it with Kyle, though. Her friend was in trouble. “I watch the news,” she returned curtly, and directed her question at Patrick. “What do you plan on doing to him?”

Patrick jabbed the air between them with a thick finger. “Teach that bloodsucker not to mess with law enforcement.”

Her composure snapped. A fireball of anger and dread blazed through her. “Why can’t you keep it clean? They have rights, too!” The sudden pressure at her fingertips made her ball her hands into fists. Her nails dug deep into her palms but she ignored the discomfort.

“Mind your own business, Stephanie,” Patrick snapped and stormed out of the kitchen.

She turned her glare on Kyle. “It’s unethical, damn it!”

He swallowed the last piece of his dessert before pushing the dish away. “I don’t get you, Stephanie…but maybe if you had a nice guy in your life like Amanda, you wouldn’t be so obsessed with these goddamn vampires and what we do with them.” With that, he left the room.

Stephanie turned away and forced down the primal sound that almost choked her. How could she be related to such uncivilized jerks? Tears pricked her eyes and threatened to flow but she blinked them back. 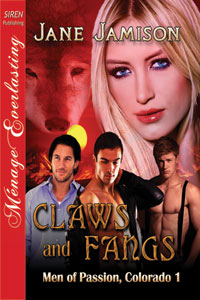 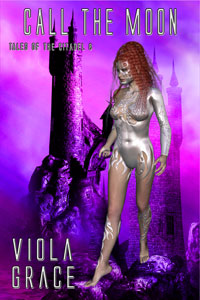