Blood On The Moon

Mia Langdon—tomb raider and adventure-seeker—has everything she wants. Freedom. Independence. No chains (a.k.a. a man). Her troubles begin when she’s attacked on a dig in Peru. Soon, she’s forced to use her tomb raiding talents to find the flaming arrows of an Egyptian goddess. In the wrong hands, this weapon could destroy the human race—and nearly had.

Used to doing things her own way, it isn’t long before she figures out that she needs the help of Harrison Braden Stanton, her stuffy, but so yummy, Egyptologist and ex-lover. There’s one problem. He despises what she does. As Mia and Harrison find themselves in the middle of a battle between the Egyptian gods and goddess, there’s no choice for the woman with a Grand Canyon-sized independence streak and the man working for the Egyptian god, Osiris, but to work together to prevent the destruction of all they love. 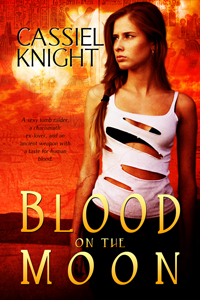 Blood On The Moon

Harrison stood. As if towed toward her by a fishing line, his gaze found and locked onto a tall woman in a sleek gown of scarlet. It wasn’t just the color that got his attention, or made his mouth suddenly dry. It was the long, naked line of her spine revealed by the nearly backless dress, a smooth expanse of flawless skin that begged to be touched. To be caressed. To run his lips along the indentation of her spine.

Unlike most of the other women with hair pulled into tight knots, the exotic woman’s black hair fell in a loose braid down to the middle of her back. Some hair escaped, defying any attempts at control.

She carried herself confidently, her strides smooth and slinky as if she were aware of the appreciative gazes following her every move. Pure animal sexuality screamed from every bump and swivel of her hips. Harrison clenched his jaw. Fingers gripped the back of the chair as he fought the urge to adjust the tightness in his crotch.

The woman’s whose body language fairly shouted take me now turned her head and looked him straight in the eye. God almighty. The full lines of her lips curved into a mischievous smile. Familiar tawny eyes glowed with humor.

He should have bloody well known. Indeed, the most primitive part of him had known. Scarlet dress, red, the color of warning. The color of danger. Everything Mia Langdon was. Dangerously exotic, dangerously sensual.

The only woman who had the power to take his breath away. The woman who he once thought would be at his side for the rest of his life. Until he discovered, unlike the perfect relationships in romance novels, love did not conquer all. It failed to conquer the insurmountable, deep within their soul, differences each had about their passions. The passion for history. While he worked to protect the past for the future; Mia salvaged the past’s treasures for the glory. For the excitement. For the money. That he could not get past.

Hovering at the beautiful woman’s side was the sun-kissed sable waves of his recalcitrant niece. And just a little further away, a tall man with dark hair. Bloody hell. Sebastian. Harrison’s stomach twisted. The only way this situation could get worse is if—