With a Ruger Blackhawk .357 under her pillow, a Browning A-Bolt Stainless Stalker rifle in her broom closet, and a Saturday Night Special in her road-hog cookie jar, Detective Leslie Bolt’s sarcastic attitude and inability to trust, alienates her from most people. Forced to work a serial murder case with her ex-lover, she begins a budding romance with the department’s new medical examiner, but which man will she choose?

"The State Quarter Killer” is selecting victims that appear to have nothing in common except for the State Quarter placed under their lifeless bodies. When her sister goes missing the question rises, will Detective Bolt capture the serial killer before her sister is the next victim? 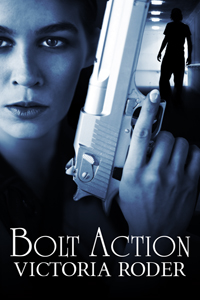 Lying in the dark shadows of my bedroom, I awoke with a start at a slamming sound. Every hair on my arms crystallized as I grappled under the pillow for my Ruger Blackhawk .357 and flashlight. Baby, my cat, scared to near death, screeched and ran from the bed. My heart lurched in my chest. In the silence of the night, the sound of the Ruger cocking ricocheted off the walls.

In an attempt to become undetectable in the darkness, I inhaled the slowest breaths possible without passing out. Convinced someone observed, perhaps studied, my every movement, I summoned my courage with a prayer.

I flipped the flashlight on and scanned my bedroom. For the third time this week, nothing, no one present.

To ease my mind, I proceeded through my duplex with stealth-like movements, as if I were responding to an armed intruder call. Keeping my wrists crossed with my Ruger in my right hand and the flashlight in my left, I crept from one room to another, turning on every light available. With my duplex lit up like a landing strip, I positioned the flashlight on my oak end table. Confident the twelve-and-a-half inch barrel of my .357 protected me, I jerked open every closet door, hoping someone waited inside to be shot. I believed an apprehended suspect might be my chance at sanity, putting to rest the repetitive noises and sensation of being watched.

With a predator-like approach toward the bathroom, I noticed the shower curtain stirring. My pulse throbbed in my esophagus, threatening to cut off my air supply. Creeping into my nineteen-fifties Pepto Bismol pink bathroom, with a trembling hand I grasped and jerked open the curtain. The sound of the rings scraping against the rod made a deafening screech.

Succumbing to mental exhaustion, I leaned my head against the bathroom door. “Shit.” In the silence, the sound of my own voice startled me. I couldn’t keep going like this night after night.

A slamming noise vibrated between the duplexes. Sprinting to the kitchen, I set the flashlight on the counter and pressed my face against the kitchen window. I cupped my left hand around my eyes to peer into the driveway. I surveyed the driveway I shared with my neighbor Mark, but I couldn’t detect his car.

If he’s gone, where is the noise coming from?

I thought of one place I hadn’t checked. The thought of entering the moldy, reeking storage area made my stomach contents curdle like cottage cheese. With my desire to find the source of the noises superseding my fear of dark, damp spaces, I tucked the Ruger in the waistband of my drawstring sleep pants.

Out of my collection of weapons that I have stashed around my apartment, I choose my Browning A-Bolt Stainless Stalker rifle from behind the mop in the broom closet. I headed in the direction of the enclosed storage area. Flipping on the porch light in hopes of frightening an intruder, I exited my front door. As I reached the bottom of the wooden steps, I could detect an outline of a person in front of the shadowed storage area door. Male─at least six feet tall.

Cocking the rifle, I warned, “Stop. I have a rifle.”