Bonamy lives contentedly within the strict confines of her regimental routines—that is until Dipuc enters her life. Clyde Barow, has been smitten with Bonamy ever since he saw her in the elevator of their apartment building, but she doesn’t know he exists. Can Bonamy see beyond her perfectionist ways and realize that perhaps Clyde is exactly what she needs? With a little impish help from Dipuc, all three of their worlds will collide. 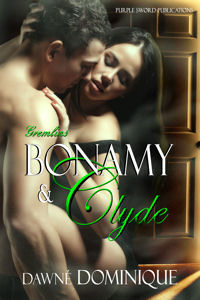 Dipuc skittered across the cement wall to the pretty one’s ledge and peeked through an ivory haze cast by the flowing drapes overlapping the window. Careful to stay hidden, he stared at the dark-haired beauty by the bed.

A misty circle formed on the glass close by his lips. So pretty.

But those entities in Master’s domain always recoiled in horror when they saw him.

This particular female intrigued him. He’d sensed her energy first. Wires and electrical currents always quickened his blood, drawing him like a fly to a carcass, but her energy—it was different—so alive and filled with sensual beauty. He’d promised Master to be good, and he intended to keep that oath. That ‘other’ dormant power of his was never to be used, yet it was so similar to what he felt emanating from this human female.

Dipuc propelled his essence into the odd rubber toy lying beside her. He listened as the pretty one’s breathing grew deeper and hushed whimpers filled his ears.

Is she sad? he wondered.

A supple thigh nudged him. He tried to concentrate on her movements, to understand what she was doing to cause such lamented sighs. The more he gave ear, the more his lungs moved in rhythm to hers.

When warm fingers grasped around his middle, squeezing in such a delightful manner, the incredible sensations severed the link between him and the energy of his essence. Slammed back into his body outside the window, he almost fell from the precarious ledge. He tingled from head to toe, similar to how he felt when Master touched him, but this was more intimate, more intense.

He peered through the pane of glass as she rose from the bed and walked out of the bedroom, returning moments later. Adjusting something on the strange colored tube in her hand, she lay down again. He hyper-jumped his essence back into the toy shaft determined to feel that luxury again.

Fingers grasped him, and he shivered at the jolts of electricity coursing through him, though it had nothing to do with his power. She rubbed him over her hot flesh, across two mounds of satin softness that vibrated in tempo with him. He’d never felt anything so blissful. Stiff peaks of skin grazed his senses and his lungs seized.

As she pushed him lower, he became disorientated, but anticipation kept him positioned inside the pliable rubber container. He traveled up and down metal conductors searching the surges of power, impatiently wanting to know where the journey was taking him. He waited. Suddenly, moisture slickened the strange coating encasing his body. Like hot, liquid fire, the wetness made him tingle more. Why had pretty one sucked in a loud breath when she placed him there?

What is she doing?

Downy hair feathered around him like a warm blanket. The wetter his outside got, the more exhilarated Dipuc became. She guided him to a dark tunnel, glistening and beckoning him to enter. If this was dangerous, he was willing to chance death to find out where she was leading him. An aphrodisiac fog wrapped around his senses, clouding his brain. This felt better than controlling any type of machinery. He wanted silken skin to swallow him, to clench around him; he wanted to taste, to slide back and forth as he danced his magic inside the quivering toy and explored the pretty’s body.

She applied more pressure around his middle and shockwaves scoured through him, once again hewing the connection between his mind and the electric currents of the toy. Gasping, his world tilted from the severing.

Dipuc found himself outside again, watching as she slapped the plastic toy against her hand, her face pinched with frustration and anger. He couldn’t wait. He leapt again, needing more of this sinful energy.

When he entered the toy this time, he found himself cocooned in absolute heaven. With a twist of his arm, he rose higher in the object, pressing against the swollen nub that created a violent rush of moans and husky murmurs from the pretty human.

Ohh, she likes that.

Torrid heat rushed through him, hotter than the fires he’d been born into. The sensations made his concentration wane and once more, he found himself grasping cold cement with his clawed feet and hands.