Warwick, whose name has a second W that’s silent, also has a new neighbor who is anything but. The constant creak of bedsprings and headboard banging against the common wall has Warwick in 11-A wondering if the activity in 11-B is an occupation and not merely an enjoyable hobby.

When Warwick finally meets noisy neighbor Dom, though fun, heat, and music ensue, uncertainty and questions remain. Some things are easily explained away by the sort of happenstance and misunderstanding silly sitcom plots are based on, but a painful past connection, a difficult future, and a lie in the present set up roadblocks Warwick and Dom struggle to get over.

Can Warwick and Dom create a second verse to their love song, or will the tune end before it really begins? 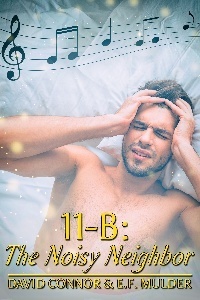 “Anyway, does any of your aromatically delectable breakfast fare remain?” Dom returned much more quickly. “This French toast made by an Englishman, who, perhaps, might be so kind as to share it with his new Italian friend? My tummy is rumbling.”

Warwick tried to hear it. He stared at hairy flatness, then scanned upward, where a thicker line of hair spread like the spray of a fountain over Dom’s chest. By the time Warwick got past the muscular arms, the broad shoulders, the salt and pepper beard, and then the eyes, he almost blurted out what he had suddenly realized.

“I ran out of bread,” came instead.

Now, Warwick couldn’t stop looking at Dom’s eyes. The uncertainty and fear were there. That and something else. The finger Dom had placed upon Warwick’s body wasn’t flirtation, overt familiarity, or a blatant come on to a supposedly married man.

It was something else, that and the offer of a hand slightly out of alignment for a shake.

“Well, you couldn’t have planned for a hungry neighbor imposing himself on you, I suppose,” Dom allowed.

“Your eyes ...” Warwick wanted to ask, but he feared it was rude. “When you smile, it’s there as well as on your lips.”

“You’re looking at my lips, Warwick?”

“I can’t seem to help myself.”

“Damiano Giovanni Giuseppe Roma!” A woman had appeared from around the corner, presumably from apartment 11-B. Her raised voice and hands on hips posture indicated a scolding.

“And not a silent letter in the bunch.” Neither, apparently, could Dom.

“Penny. The bride to be.” Dom nodded in her direction.

She was as big as a minute, as tall. But there was a lot to the tiny package. Penny had a voluptuous figure and big, blond hair that added a good four or five inches to her height and the width of her head. “We’re going to be late.” Her jeans were tight, her silky blouse rather sheer, a tank top beneath it a bright fuchsia that clashed a bit with the neon lavender headband holding her huge hair back. “Who made this mess, and why are you standing here flirting instead of picking it up?” One more thing, Penny wasn’t interested in introductions.

“No one was flirting,” Warwick insisted, even though he’d wondered the same thing himself.

“This is our neighbor, Warwick. Neighbour with a U. Warwick without the second W.” Dom needed a breath to continue. “Warwick,” he put his arms around the petite blonde woman’s shoulder and drew her close to him, “this is Penny.”

“He’s got an accent.” Penny’s tone continued toward rebuke and made Warwick want to apologize for his Britishness. “And we were supposed to leave for the airport ten minutes ago.”

“I’ve been right here.” Dom with a much longer name was the epitome of nonchalant.

“Warwick’s not wearing one either.” The smile that so charmed Warwick didn’t work on Penny. “I touched his chest ... and also what felt like the elastic on boxer shorts. At least I have on pants.”

An empty clear glass juice jug missing its label did little to quell Warwick’s modesty when he held it in front of his willie.

“Warwick’s not coming to the airport,” Penny sniped.

“He could ... If he wants.” Dom looked over with an expression Warwick wanted to call hopeful.

“I’m good.” The non-British phrase was the first to come to mind.

“Suit yourself.” Hopeful melted into disappointment, replete with another heavy sigh. If Dom was 11-B’s resident piano player, it meant perhaps all men into music were dramatic, Warwick thought. “And I don’t need a shirt,” Dom told Penny. “It’s hot, and I’m not actually getting on the plane. Really, there’s no point in me going.”

“You’re going so you can say goodbye to me,” Penny said. “And you’re wearing a shirt.”

“I could say goodbye from here.” Dom kissed her forehead. “Ciao.”

“You’re also going because you’ve been cooped up in this apartment for five days doing nothing.”

“Not nothing,” Warwick wanted to say.

“And who knows how many days in a different apartment before that, DJ? You need to get out.” Penny sounded like imaginary Lawrence.

“She’s testing me,” Dom said. “To make sure I can find my way back here, where I’ll be all alone, right next door, for several days and nights.” He aimed all that at Warwick, with an expression that might have been hopeful once again.